MEL BROOKS: ‘To Be Or Not To Be (The Hitler Rap)’ (Island Visual Arts 12IS 158)
Again with musical help from our own Pete Wingfield, the zany film maker raps some more in typically bad taste about one of his favourite topics, the Nazi Paar-tay! If his gruff vocals can cut through on the floor, this ‘The Crown’-style 105bpm 12in (inst flip) could just be an early springtime hit for Hitler. Say “Heil!”

TYRONE BRUNSON: ‘Fresh’ (US Believe In a Dream 4Z9 04951)
Well over a year after his electro trail blazing ‘The Smurf’, Tyrone’s finally returned with a vengeance – obviously fuelled by Herbie Hancock’s success – the A-side of this jittery driving 113bpm 12in instrumental having nicely varied texture including string section effects and tuneful moments, the immediate smash though being the starker ‘scratch mix’ flip (“serious scratchin’” by Elai Tubo) which smacks up a less varied hip hop storm (Charles Earland’s an ace mix!). Rock it!

KENNY G: ‘Hi, How Ya Doin’?’ (LP ‘G Force’ US Arista AL8-8192)
Although produced by Wayne Brathwaite the stamp of executive producer Kashif is all over the synthesized rhythm arrangement of the white saxist’s second solo set (soulful vocals by Barry ‘Sunjohn’ Johnson), this acappella-introed 113bpm jiggly shuffler (good with ‘Serious’) already hitting on US single while just about every cut could click here – most are instrumental with jazzy sax and strong beat, and include the 0-117½bpm ‘I’ve Been Missin’ You’, 107bpm ‘Tribeca’, 107bpm ‘G Force’, 115bpm ‘Do Me Right’, 116bpm ‘I Wanna Be Yours’, 106bpm ‘Help Yourself To My Love’. Cool tootin’. END_OF_DOCUMENT_TOKEN_TO_BE_REPLACED

Ian Anthony Stephens confirms he produced ‘Evergreen’ by Hazell Dean in September purely as a promo for Proto, who rejected it, so Passion then asked him to cut a budget version for them by Fantasia, after the release of which Proto then tidied up and rushed Hazell without consulting Stephens (whose next project is Paul Parker) . . . Tricky Dicky Scanes (London’s Dicks Inn) says “I can’t bring myself to chart either version of the insipid ‘Evergreen’ until demand makes me – so far the punters aren’t bothered” (it hit number one Boys Town without him!) . . . Hazell Dean meanwhile will be singing her own co-penned “Stay In My Life” for A Song For Europe . . . Earls Court Copacabana DJ Chris Lucas is chuffed to have co-mixed Mimi ‘The Man’s So Real’ (due on Challenge next month), his first venture into the studio . . . Gary Allan at Liverpool’s Concert Street has had so many requests for the video of local lads Frankie Goes To Hollywood that he’s now after any other Hi-NRG/Alternative promo videos which companies can send him . . . Disco Dave Singleton (Newton-Le-Willows 6018) is after DJs to act as agents to get his video juke boxes installed in venues from Ipswich to Carlisle and Southport to Hull, on £100 commission per machine . . . Steve Jason moans he’s not on major mailing lists yet nobody in Peterborough plays to more people 18-25 than him (he says): his gigs include the Gordon Arms (Sun), The Gables (Mon/Fri), and just started on Tuesdays with Paul Douglas at La Scala where there are excellent PA/video facilities (Total Contrast visited this week) . . . Frank Samms has finished working mobile to be full time at Egham’s The Victoria in Albert’s Music Room, which he himself equipped with a DJ booth and customised sound system . . . Nick Ratcliffe’s Thursdays at Portsmouth Ritzy are packed – maybe it’s because punters pay a penny at the door and get a pound voucher to spend at the bar – but Saturdays are even fuller, and they’re surprisingly “into” the music too, sez Nick . . . Pete Richards shares Thursday ladies’ night with Terry Winters at Greenford Barbarella’s, soloing Saturday and Sunday, the latter pub prices jazz/soul oldies night (so how about some charts?) . . . Froggy rejoins Ian Reading at Southend Zero 6 this Friday (20), when Carroll Thompson PAs with Steve ‘Dover’ Day and Sheerness Woody’s, and Fred Dove graciously permits Dartford Flicks to show his WEA videos . . . Sheffield body-pop/break dancers Smac 19 strut their stuff for George Power at Peckham Kisses on Sunday (22) . . . Julian Palmer at Lewisham’s Paradise Garage plays an interesting range of current funk, Northern Soul, Hi-NRG and old jazz, while Aaron Lewison-White at Brooksie’s (formerly Martines) near Chichester joins the trend of adding Hi-NRG to recent pop-soul . . . Colin Gibson at the basically funk ‘n soul orientated Stripes in Tamworth is nevertheless raving about how useful some pop-electro tracks by Sparks can be, citing several cuts from their ‘Terminal Jive’, ‘Whomp That Sucker’ and ‘In Outer Space’ LPs, which work so well the club’s even had a special Sparks night recently (well, it makes a change from Roxy/Bowie!) . . . Nige Kerr & Dave Nash of the on-base disco at RAF Machrihanish (near the Mull on Kintyre) welcome the locals to honorary membership (apply in writing) and are now slipping lots of funk into the pop . . . Lee Taylor sits in for the rest of this month at London Piccadilly’s Tokyo Joe’s but is still after permanent gigs on 01-385 4345-6 (days) . . . M.A. Bird, calling himself Tony StMichael, but with the daytime contact name of Mr. P Thorogood on 01-609 3851, wants Boys Town gigs or guest spots specifically in East Anglia, the North, East London or Scotland – talk about a split personality! . . . Status IV is of course only 113bpm . . . Trans-Lux may work best minus the annoying early pause if started at the ‘Rockit’ bit, while Man Parrish ‘Hip Hop Be Bop’ starts synching superbly during ‘White Lines’ so the following ‘Let The Music Play’ vocal runs through it . . . Lionel Richie ‘All Night Long’/World Premiere/Circle City Band/Status IV/West Phillips/Charles Earland/IRT/Break Machine inst/Tara inst/The System ‘Sweat’/Rick James ‘Cold Blooded’/Rockwell/Michael Jackson ‘Thriller’ was my hottest mix sequence of last Saturday at Mayfair Gullivers, while a Friday electro-funk set kicked off well with Warp 9/Malcolm X/Pumpkin/K-9 Corp ‘Dog Talk’/Sun . . . Kool & The Gang ‘Joanna’ is now top US Black single and rising fast Pop there too . . . Seattle-printed US soul fanzine Beat Street is quite an interesting read (although it promises increased rock coverage to come), available here at 50p per issue plus 30p postage from Max Rees, 114 High Street, Cherryhinton, Cambridge, Cambs . . . Graham ‘Disco Kid’ Cambridge, still after ABC’s ‘Poison Arrow’ remix, wants DJs to send him an all-time Top 20 chart for him to compile into a Top 500 for comparison with a similar punters’ list already done – he’s at 4 Dane Avenue, Acomb, York YO2 5EX (0904 790686) . . . Michael Jackson, for all his current mega-stardom, couldn’t manage higher than number 51 in Capital Radio’s latest listeners’ Top 500 – and that was with ‘Ben’ (he had another 11 lesser entries, mainly slowies) – while even more staggering was Stevie Wonder’s best effort at 150 with ‘Lately’ (he only managed another 5) . . . RCA sent jocks an Evelyn Champagne King ‘Action’ slip mat (just the one) – to get “behind the groove”? – while Island impressively kitted me out with a giant size David Joseph anorak! . . . DIN DAA DAA!

WORLD PREMIERE: ‘Share The Night’ (Epic TA 4133)
Looking like the next disco chart-topper even had it stayed on import and a sure fire pop crossover success now it’s out here, this effects introed sinuously weaving 0-108bpm 12in shuffling chugger builds through stereo drumbeats to throaty butch vocal interaction lightened by some Bee Gees harmony, ‘Galaxy Of Love’ jetstream, and a yowling synth break, all very sneakily exciting (two useful instrumental breakdowns as flip).

THE MANHATTAN TRANSFER: ‘Spice Of Life’ (Atlantic A 9728T)
Co-penned by Rod Temperton much as if ‘Off The Wall’ had been arranged by Bob James during his ‘Sign Of The Times’ session, this superb chick-sung catchily slinking 110bpm little tripper has a burst of Stevie Wonder harmonica topping off its compulsive melody and first exploded on New York radio in September, but has had to wait until now for 12in release despite initial success off import LP last year. END_OF_DOCUMENT_TOKEN_TO_BE_REPLACED 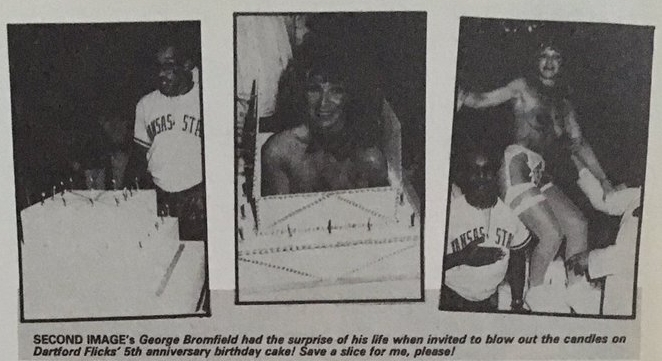 A shortage of commercials on telly this last week could have been caused by the sad death of the voice in so many of them, Alexis Korner, undisputed father of British R&B. Anyone familiar with his distinctive croaking smokey vocal will not be surprised that a cancerous lung finally felled him.

By the early ‘60s Alexis had teamed with tubby mouthed harpist Cyril Davies to form the incredibly influential Blues Incorporated, instituting Thursday R&B sessions at London’s Marquee Club when it was still a jazz venue under the Academy Cinema in Oxford Street.

It was Alexis’s enthusiasm for then current sounds that led to a split in the group, as he liked playing ‘Green Onions’ (etc) in amongst the Chicago bar room standards, Davies talking singer Long John Baldry into his own group while Alexis recruited the black Ronnie ‘US Air Force’ Jones. A Thursday regular at the Marquee from October ’62, I nevertheless remember the best set ever being fronted by Ronnie in his uniform up at La Discotheque in Wardour Street.

The first star I ever got to know, Alexis subsequently mentioned several times on his occasional radio series (where he played a range of obscure delights) how it was I who first turned him onto Otis Redding. By coincidence, that was exactly 20 years ago. Now they’re both gone, but their influence will linger on . . . if only in the Rolling Stones.

GEORGE KRANZ: ‘Din Daa Daa (Trommeltanz)’ (Fourth & Broadway 12 BRW 2, via Island)
A mindblowing monster of silly gibberish gimmickry given an epic Wagnerian production, this fabulously exciting 0-123-0-123-aca-122⅓bpm 12in amalgamation of doo-wop, scat, nonsense and noise builds ever upwards to an acappella break (try chopping Hot Streak minus intro out of it), and although far from electro it’s perfect mixed with Hashim (less dense 121bpm original and ditto accapella-ish dub flip). From Germany, it’s now huge in the States and could be another ‘Underwater’ here.

DONNA SUMMER: ‘Stop Look And Listen’ (Mercury DONNA 312)
Although nominally A-side, this quite beefily textured choppily lurching 124bpm 12in thudder is likely to be overtaken by its really lovely and actually very soulful 93bpm ‘Tokyo’ flip, which could be huge and is certainly worthy of “summer tempo” play (appropriate, what?!). END_OF_DOCUMENT_TOKEN_TO_BE_REPLACED

I did well after Xmas, fell over in the gutter (on the rooftop car park at Doncaster’s Arndale Centre, of all romantic locations!) and strained a ligament in my ankle, which resulted in a relaxing week with my leg up!

Rated by the country’s top DJ’s as the most up-front disco chart in the UK, compiled on Monday, on the street on Wednesday