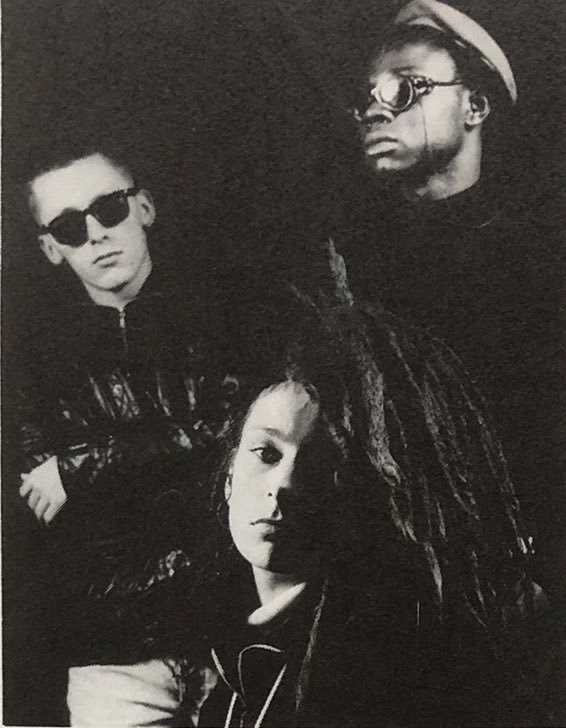 ‘House Arrest‘ and ‘House Reaction‘ are two of the hottest homegrown house tracks of the moment, both being by Nottingham-based house groups, both of which include Mark Gamble in their line-up. Mark (on the left in both photos) is joined in KRUSH by Cassius Campbell (DJ Cassroc) and guest vocalist Ruth Joy, while his co-members in T-CUT-F are Delroy Joseph, DJ Franklyn McDonald and (unpictured) Leroy Crawford.

KOOL MOE DEE ‘How Ya Like Me Now’ (Jive/ Rooftop Records JIVE T 156)
‘Night Train’-introed great ultra-jittery (0-)104⅓bpm toughly worded rap cutting in James Brown beats (edit too), flipped here by the old (0-)88⅓-0bpm ‘Do You Know What Time It Is‘, the hot track from his last album. 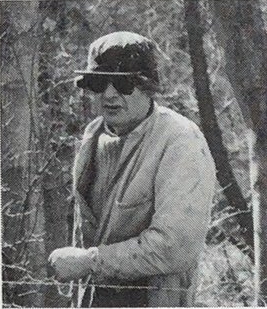 SPARROW HARRISON’s face got cropped from the Spooky Soul Sisters’ photo in last week’s cramped conditions, should you have been puzzled by the caption, but here really is the def trooper, surveying his North Wales estate! A prep school chum of John Peel, with whom he ran a music appreciation society as long ago as the late Forties, Sparrow (real name Robert — don’t ask!) led a notorious group called Sparrow & The Gossamers, and turned me on to R&B in 1962 when we used to catch Alexis Korner and Cyril Davies at the old Marquee in Oxford Street. A lot’s happened since then!

PETE WATERMAN has periodically slotted Capital Radio DJ John Sachs’ “skiddendaddy” catchphrase through the upcoming STOCK AITKEN WATERMAN ‘Packjammed (With The Party Posse)’ (Breakout USAT 620), due fully on December 1, a disappointingly dull and contrived organ-based brassy (0-)99⅔bpm funk jiggler that’s too much like though not as catchy as ‘Roadblock’, with nothing really happening to grab one. Back to the drawing board?

THE MICROPHONE PRINCE ‘Rock House’ (US Still Rising Records SRR-1007)
A totally wild rap three-tracker (plus instrumentals), featuring this jolting 96½bpm retread of the Commodores’ Brick House’, the 96⅔(-0)bpm ‘Memory Lane‘ which makes better use of Dennis Edwards’ bassline than even ‘Paid In Full’, and the Ed Sullivan impersonation started madly syncopated 83⅚bpm bonus rap ‘Hound Dog’ — yup, Elvis’s, brilliantly combined in fact with ‘Don’t Be Cruel’ and ‘Blue Suede Shoes’ in a rock ‘n’ roll rap that leaves ‘Go Cut Creator Go’ in the shade. These have to be heard!

BRENTFORD ALLSTARS ‘Greedy G’ (Studio One GRED 401, via Greensleeves 01-749 3277)
The burblingly chugging dub treatment of James Brown’s ‘Get On The Good Foot’ that we’ve been crediting to the Dub Specialists for want of any other identification when on LP, the basis for Matt Black + The Coldcut Crew’s ‘That Greedy Beat’ (and an influence on Derek B’s ‘Get Down’), is now on UK 12 inch in its original mix and a much thinner less resonant extended remix, plus (all at 109⅔bpm) a new rap treatment as T-SKI VALLEY ‘The Jam Is On‘.

HEAVY D & THE BOYZ ‘The Overweight Lovers In The House’ (MCA Records MCAT 1206)
The heavyweight 0-99bpm rap based largely on the JBs’ ‘Pass The Peas’ is here unbelievably flipped by (also released, MCF 3396) their ‘Living Large’ LP’s next hottest cut, the JBs’ ‘Gimme Some More’ and O’Jays’ ‘For The Love Of Money’-based 98bpm ‘Moneyearnin’ Mount Vernon‘, plus the oddly syncopated 0-79½bpm ‘Nike‘. END_OF_DOCUMENT_TOKEN_TO_BE_REPLACED

ERIC B & RAKIM ‘Paid In Full’ is already due out in Derek B’s Urban Respray mix, while their T-shirt is one of the classiest ever, black with a luxurious thick gold dollar sign on the chest … Society ‘Love It’, the previously reviewed Coldcut mix, is out here on November 23 … Chris Paul’s far better (as warned) 123¼bpm House Mix of ‘Back In My Arms’ (Syncopate 12SYX 5) samples vocal phrases from all sorts of volume-pumping disco hits and really jacks along, the one to get … Radio London could be facing some drastic changes as, unbelievably, of all the BBC’s local stations it apparently attracts the lowest percentage of available listeners (despite what Tony Blackburn keeps claiming) … Jeff Young. who played Supertramp’s soulful ‘I’m Beggin’ You‘ Hi-NRG hit at Prestatyn, adds an hour to his weekly Radio 1 dance music show from Friday, Nov 27, running then 7-10pm … Pete Waterman is “doing a Jonathan King”, hosting a Saturday afternoon show on Liverpool’s Radio City, playing the records he thinks should be hits and inviting listeners to send in their own recordings on tape (which he’ll consider for release) … Catherine Buchanan is ‘Famous For 15 Minutes’ this Friday the 13th at 6.15pm on Channel 4, the singer of Jellybean’s ‘Sidewalk Talk’ (and operatic diva on ‘The Opera House’) being revealed as an artily worded rapper with Talking Heads-type appeal … Thursday (12) Tony Griffin and Jerry Hipkiss start weekly soul/funk/house (strictly no yardie music) at Bristol’s smart Parkside Club in Bath Road, with Fred Dove as guest DJ the opening night … Chris Forbes is guest Def-Dance DJ this Friday (13) at London Limelight’s weekly The Chain Gang, followed in coming weeks by Nicky Holloway, Dancin’ Danny D and Jeff Young, while Gilles Peterson and Chris Bangs jazz the basement … Sunday (15) Chris Hill and Paul Morrissey guest with Steve Aspey at Oxford Boodles, and Hazell Dean joins Norman Scott at Luton Bolts … JM Silk featuring Keith Nunnally, Darryl Pandy, Full House, Joe Smooth, Chip E and Frankie Knuckles are jack tracking around the UK, at Derby 20th Century Complex (Nov 14), Kentish Town Town & Country Club (15), Uxbridge Brunel University (17), Brighton Top Rank (18), Bangor University (19), Hull University (20), Bradford University (21), Birmingham Porsche (22), Bournemouth Academy (23), Stockton The Mall (25), Glasgow Fury Murrays (26), Manchester International 2 (27), Sheffield University (28) … Adonis & The Endless Poker ‘The Poke‘ is due as a single from Westside Records, who have also plundered their ‘Jackmaster’ compilation LP to accompany it on strictly promo-only white label with tracks by Nitestar, Patrick Adams, Out Of Control and Hokus Pokus … ConFunkShun’s now solo Michael Cooper, way ahead of January release, has on Warner Bros promo the melodically rolling vocally sinuous 116¾(-0)bpm smoothly chugging ‘To Prove My Love‘ … EMI have tried a scam by not revealing on white label promos that it’s Climie Fisher performing the ponderously go-go-tempoed scratching 90½bpm ‘Rise To The Occasion (Club Mix)‘ (12EM 33) … Manchester’s Expansion Records shop, opening this Saturday, is in fact the north-west branch of John Anderson’s Kings Lynn Soul Bowl shop, and nothing to do with his similarly named record company’s partner Richard Searling … I spent much of my time at Prestatyn turning people onto the excellent new compilation double album, ‘The RCA Victor Blues & Rhythm Revue‘ (RCA PL86279(2)), which documents (with informative liner notes by Jerry Wexler) the progress of black music from 1940 to the mid-Fifties, through sophisticated big band blues, booting instrumentals, jumping shouts and gospel harmonies to climax in the Isley Brothers’ ‘Shout’ — terrific listening for the historically minded, and, as Chris Brown suggests, a good alternative for hairdressing salon and boutique play … Mark (One) Hewitt, now at Derby’s Pink Coconut and Dudley’s Goldsmiths, when jocking in Spain at Lloret De Mar’s Tropics had not three but five Technics SL1200’s to mix with! … I fear there’s so much advertising on these pages this week that there’s hardly any room for reviews, so check the Black Dance chart for new entries’ Beats Per Minute … DON’T STOP JAMMIN’!

Livewire’s second PRESTATYN WEEKENDER really showed how black music in Britain has polarised into two main types. Although soul and jazz were indeed played, the music that thundered through the speaker stacks to greatest audience response was rap and house. Even Robbie Vincent was playing it! By contrast, instead of the classy jazz and Sixties oldies that were normally featured upstairs, it was Nicky Holloway’s demented Seventies “disco” party that finally packed the smaller floor there. The biggest record by far was Eric B & Rakim, to such an extent that after the opening Friday night’s overdose of “Eric and Derek”, it was virtually banned! The Cookie Crew’s appealing live PA helped ‘Females’ too, while Pete Tong was featuring an acetate of the brilliantly exciting Jazzy Joyce-scratched dub mix of ‘Tighten Up’. The live star, Alexander O’Neal, left ‘Fake’ for his obligatory encore and was all ready to leave (some of the band had even re-boarded the bus) before being persuaded to come back and do his all-time UK classic, ‘What’s Missing’ — which nearly was! A good weekend, with few surprises and no trouble. Prestatyn III is at Easter, April 2/3/4, 1988 – details from Livewire on 01-364 1212. 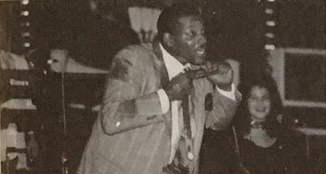 ALEXANDER O’NEAL got so hot performing at Prestatyn thot he tried to take his tie off — a normally macho act for any male singer, but this time he couldn’t undo the knot, and even with help from the band it took him a hilarious three minutes!

The once again slimline SEAN FRENCH was, as usual, in charge of the Pontins comp’s closed circuit Live Wire Television and radio service, broadcasting interviews, movies and music.

Saturday at Prestatyn coincided with Hallowe’en, and the SPOOKY SOUL SISTERS were the best dressed posse! In the top left corner, incidentally, you can just see local North Wales landowner Sparrow Harrison, on old school chum of John Peel and the man who turned me on to R&B in 1962.

Breakout’s ROB MANLEY, Phonogram’s JOHNNY WALKER and Profile’s PAUL OAKENFOLD got so high on “house” (and very silly) that when the time to crash come, they were totally zonked! 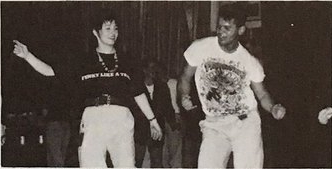 ALEXANDER O’NEAL ‘Criticize’ (Tabu 651211 6)
In four Steve Hodge remixes, this lurching 115⅓bpm smacker with catchily chorusing girls will certainly now work well and have pop appeal, despite being far from his album’s most popular cut.