Two weeks away on Sunday March 10, Disco Mix Club’s DJ Convention at London’s Hippodrome costs £10 with excellent buffet an extra £7 (food only available if booked): send cheque made payable to DJ Conventions 1985 at 25 Monkspath, Walmley, Sutton Coldfield, West Midlands B76 8RX, and remember it’s who you meet that’s more important than the actual event . . . Manchester’s Millionaire has arranged an amazing exclusive boost for any visiting artistes doing PAs —they also appear beforehand at the Arndale Shopping Centre’s packed Top Shop, right next to a chart return record shop (details John Mayoh 061-236 2466 or Ratko Top Shop 061-747 4655) . . . Britain’s majority musical taste remains unfortunately as ever influenced over the short term (reflected in the chart) by national Radio One: however, it’s heartening to recall those many soul classics which might have sold better back in the 60s, when the Light Programme in its equally ignorant way was just as blinkered about black music, and which are now better remembered by everyone than the briefly successful “popular” pap that was forced instead onto a public who knew no better — until that is they eventually heard Booker T & The MG’s, Ramsey Lewis, Edwin Starr, Eddie Holman, Jackie Wilson, The Drifters, Delfonics, Tams, Isley Brothers and indeed all the early Motown hits, on the second or even third time around often many years later . . . Redds And The Boys’ import version is far stronger than the UK version . . . Kool & The Gang ‘Misled’ in a less rock-y remix “to help break it on the floor” is due flipped by the original . . . Record Shack picked up the new Disconet remix of Samantha Gilles, and 10 Records have Maxi Priest . . . Richard Jon Smith’s promoed 118⅓bpm ‘ABC Of Kissing‘ is a dead ringer for Phil Fearon! . . . Caister’s main camp, on the same April 12-14 weekend as the overflow Caister Soul Weekender has been ousted to the nearby Seashore camp, is rather strangely the site for a rival Caribbean Weekender with lots of London sound systems and such radio jocks as (probably) David Rodigan and CJ Carlos — could make an interesting clash! (details Jet Promotions 01-689 9231) . . . LWR, Solar, Horizon, Skyline and seemingly more Greek and Arab stations than ever were all going strong in London last week despite official claims and hopes to the contrary . . . Radio London Soul Night Out tickets are only available on the door from 9pm Thursdays at Kilburn’s National Club, to prepare for a scrum . . . Radio Mercury’s auntie funker Peter Young actually played Prince ‘Erotic City‘ — it’s the way he funks ‘em! . . . Bronski Beat ‘Smalltown Boy‘ topped US Dance/ Disco, with the Prince-prod/penned Sheena Easton ‘Sugar Walls‘ in hot pursuit and big in the Black chart too . . . Rick James predictably takes a Prince-like rock route on his new material — well, he would wouldn’t he? — while Mick Jagger’s current video is remarkably like Prince (or is that vice versa?) . . . Thames Valley DJ Assn meets noon Sunday (24) at Bracknell Oceans in Market Street . . . Phillip Sampson tonight (Thursday 21) opens Brighton’s first purpose-built gay club (the mind boggles!), Beverly Hills in Meeting House Lane, with next week (28) Earlene Bentley the first of its Thursday big name cabaret stars . . . Tuesday (26) Laura Pallas & Phyllis Nelson star with Adrian Dunbar at one-off gay Basseys in Southampton’s Mayfair Suite, while Sunday (24) sees Carol Jiani at Bournemouth Academy’s Bolts and Divine at Edinburgh Fire Island . . . Hi-NRG breakers include Vivien Vee ‘Americano‘ (Dutch Break), Fancy ‘Get Lost Tonight‘ (German Metronome), Rofo ‘I Want You‘ (Belgian Infinity) . . . Peter Stringfellow, raving about Edwin Starr’s new and unplaced ‘It Ain’t Fair‘, has signed Dusty Springfield to his Hippodrome label (she refuses to go Hi-NRG) . . . Friday (22) finds Lonnie Liston Smith and other explosive New York jazzers at Southgate Pink Elephant’s Ethiopia benefit night, Mainstream live at Dartford Flicks, Darren Dawes with Ian Swanson, Clive Farrer and Hi-Res Break Crew at Bracknell Rugby Club, and Chris Hill at Peckham Kisses’ allniter . . . Bossa Man Baz Fe Jazz guests Sat (23) with Rhythm Doc at Coventry’s Precinct Roma Wine Bar, and he’s in the jazz room (where else?) at next Sunday’s (3) Nottingham Rock City alldayer . . . Pete Haigh’s new monthly funk alternative on Morecambe Promenade Upstairs At Charlestons is Tuesday (26) . . . ET’s protege ‘Mambo’ Peter Sharma is now resident at Edgbaston Faces International with an upfront funk policy Wed/Sat — there’s also a new Celebrity cocktail bar with pianist Dave Mellor, ex-MD for the late lamented Matt Munro (my condolences to Michelle) . . . Alan ‘Gibbo’ Gibson has just arrived at Jackie’s in Cairo’s Nile Hilton Hotel for his latest Bacchus residency . . . Washington DC go go label DETT’s third UK 12in through Fourth & Broadway in April will be the newly mixed studio version of Experience Unlimited ‘E.U. Freeze‘, the basis for Kurtis Blow’s ‘Party Time’ — which itself is due again in freshened form . . . I frankly will be glad when go go goes, BPM-ing all that wandering percussion is driving me mad, but not before Tony Blackburn and I have been the guests of Island Records mid-March in Washington DC! . . . Nick Ratcliffe (Portsmouth Ritzy) adds Atlantic Starr ‘Gimme Your Lovin’‘ to his go go-ish oldies . . . Keith Bell, chairman of Winchester City Football Club, after his recent record wants received ‘phonecalls from all over Britain — and the discs for free from DJs Rob Fox (Peacehaven) & Andrew Charles (Plymouth) — plus he had two offers of friendly games for the Football Club, and a proposition from an ex-girlfriend who’d rediscovered his number here (his wife was well pleased)! . . . Record Mirror, where even the small print gets results! . . . French linguists will realize the ’50s Paris discotheque last week was L’Etoile . . . Bobby Womack’s singing discovery now seems to be spelt Alltrinna Grayson . . . Steve Wiggins (Barry) reports MCA product is hard to find even in Cardiff’s top record stores and wonders if they want jocks to push it? . . . LET’S DO OUR JOB BEFORE THEY DO THEIRS!

DeBARGE: ‘Rhythm Of The Night’ (US Gordy 1770GF)
From Berry Gordy’s hip hop kung fu movie ‘The Last Dragon’, a totally infectious Lionel “calypso”-type jaunty 116bpm singalong jiggler for dancing all night long (all night), only on 7in until the M&M remix but already glossily videoed to make it a smash (slow 37½-75bpm ‘Queen Of My Heart‘ flip).

Get ready for the rap saga that’s taken American black kids by storm, and is already outdoing Johnnie Taylor’s old tales of ‘Jody’ (although it’s unlikely to be as long lasting as soul’s endless ‘Woman To Woman’ — ‘She’s Got Papers’ — ‘Another Man — ‘I Don’t Play That’ saga).

First of all there was UTFO ‘Roxanne, Roxanne’ (US Select FMS 62254), double-A-sided with the 0-109bpm ‘Hanging Out‘, in which Kangol Kid, Dr Ice & The Educated Rapper complain about a stuck-up Brooklyn girl called Roxanne and compare their unsuccessful attempts to chat her up, then (with the first few thousand rare pressings actually backed by their original 100bpm Full Force-created scratching instrumental cassetted off radio!) came the scolding-pitched young ROXANNE SHANTÉ ‘Roxanne’s Revenge’ (US Pop Art PA-7406) with her nagging reply, which prompted not only the similarly scolding SPARKY “D” ‘Sparky’s Turn (Roxanne You’re Through)’ (US NIA NI-1245) but also — getting back in on the act with of course the original Full Force track — ROXANNE (with UTFO) ‘The Real Roxanne’ (US Select FMS 62256). Stark and somewhat specialist though good fun, they all include various other dub, scratch and instrumental mixes, making the complete saga a cut-up caper for hip hop jocks, while the next chapter is rumoured to be ‘Roxanne’s Mother’! Roxanne had a baby, and can’t work no more?

END_OF_DOCUMENT_TOKEN_TO_BE_REPLACED 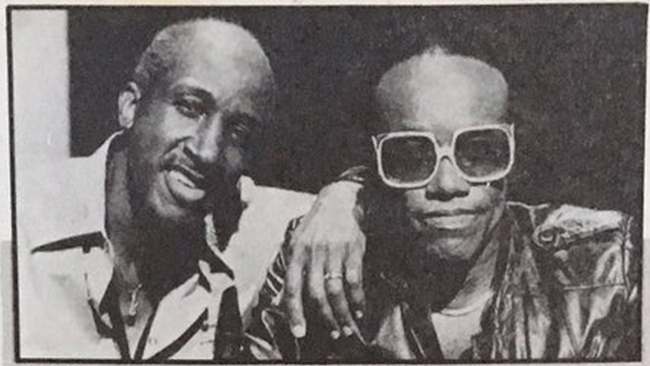 ‘Saturday Superstore’ viewers and BBC DJs should note that the bespectacled singer next to saxophonist Wilton Felder not only looks and sounds like but actually IS Bobby Womack! He and his spine-tingling protégé Altrina Grayson are the real stars of the eagerly anticipated new single credited just to WILTON FELDER, ‘(No Matter How High I Get) I’ll Still Be Looking Up To You’ (MCA MCAT 919), a tortuous soul-drenched 28½-57½…61⅓bpm gut wrencher roared and wailed by the duo in stunning style (Wilt blows alone on the flip’s speedy 138⅔bpm instrumental ‘La Luz’).

JENNY BURTON: ‘Bad Habits’ (US Atlantic 0-86909)
From the fellahs who gave us ‘Somebody Else’s Guy’, so similarities can be forgiven, this monstrously vivacious bouncy 103½bpm skipper finally supplied Jenny with soulful material to equal 1975’s ‘Nobody Loves Me Like You Do‘ (when known as Jeannie Burton), the more Jimmy Jam-ish 98⅓bpm ‘Let’s Get Back To Love‘ flip being quietly stormy although on her LP ‘Jenny Burton’ (US Atlantic 81238-1) only the extremely Teena Marie-ish lurching 112bpm ‘Nobody Can Tell Me (He Don’t Love Me)‘ also rises above her more usual electro (and some ballads).

CASHMERE: ‘We Need Love’ (LP ‘Cashmere’ US Philly World 90243-1)
Getting right away from the blatant pop commercialism of their included hit, this is a great soulfully worried buoyantly tripping little 103½bpm ticker, while the gently swaying 94⅔bpm ‘Cutie Pie‘, jerkily bubbling 120bpm ‘Keep Me Up‘, wriggling 117⅓bpm ‘Someone Like You‘, ‘Thriller’-ish 120bpm ‘Fascination‘ and jittery D Train-ish 120bpm ‘Don’t Keep Me Waiting‘ are all degrees of good.

JEFF LORBER: ‘Step By Step’ (US Arista AD 1-9311)
On remixed 12in ahead of his The System-produced album, this Audrey Wheeler wailed soulful 109⅓bpm jitterer is proving quite a nagger in Thelma style, flipped by its inst plus the jerkily tinkling instrumental 108bpm ‘Pacific Coast Highway‘ — this latter also on that ‘Step By Step’ LP (US Arista AL8-8269) along with the jaggedly lurching electro-jazz 116⅓bpm ‘Groovacious‘, Luther-ish 104⅔bpm ‘Every Woman Needs It‘, Luther meets Jimmy Jam-ish 98⅓bpm ‘It Takes A Woman’, System-ish 111⅓bpm ‘Best Part Of The Night‘, James Ingram-ish 122bpm ‘When You Gonna Come Back Home‘, Madonna-ish 120⅓bpm ‘This Is The Night‘, snarling 106bpm ‘On The Wild Side’, better by far than his last set. END_OF_DOCUMENT_TOKEN_TO_BE_REPLACED

Disaster struck on Sunday evening, my typewriter broke —meaning that much of Monday was wasted in buying a replacement, so there wasn’t then time to do any HOT VINYL reviews. You can see from the chart new entries what was truly hot, and they plus more will be reviewed in full next week. Sorry!

SYLVESTER: ‘Take Me To Heaven’ (Cooltempo COOLX 106)
Both remixed by Ian Levine, the frantically rattling 0-137bpm but otherwise undistinguished choice of A-side over his flip’s previously hotter and far better 128bpm ‘Sex’ is presumably due to the latter’s lyrics and title. Hasn’t ‘Relax’ taught anyone anything?

LIFE FORCE: ‘Reach For The Stars (Remix)’ (Polo 12-37, via PRT)
Finally released just as it drops off our Hi-NRG chart alter a run of 12 weeks, which seems like craziness to me, this chick song dynamically spurting and rattling 129bpm galloper will have to convince anyone who didn’t get it on white label that they need it now (much starker 131bpm inst flip).