WESTSIDE STORY: Ealing entrepreneur Morgan Khan’s new label signs a distribution deal this week, so no details have been made public yet, although I understand its finance is largely from Indian and US sources … Pete Tong was indeed creating a scam, last week’s moody white label 128½bpm house instrumental credited as ‘The Bootleg — The Rare Grooves’ turning out to be commercially the B-side (actually subtitled ‘The Rare Groove Bootleg‘) from Arthur Baker’s 128¼bpm Club Senseless remix of – ulp! we’ve been had! – Fine Young Cannibals ‘Ever Fallen In Love’ (London LONXR 121) … Jimmy Jam & Terry Lewis’s new (0-)114¼-114½bpm Manic Mix of Herb Alpert ‘Keep Your Eye On Me’ has indeed got chugging gospel organ, scratched-in girls going “funky” and just the Tijuana trumpet breaks, flipped on promo by an intro-less 114bpm instrumental of the hit version with, if anything, extra trumpet … Marshall Jefferson ‘House Music Anthem’ still has too many legal problems for RCA to release it here after all, despite pressing up 1,500 white labels … Charly won’t have Anita Baker’s ‘Angel’ here either, as they never clinched a deal – shame … Rhythm King’s £5.99 double album, Chuck Brown and the Soul Searchers ‘Live ’87’ (Flame Records MELT LP3) includes as the stronger sides three and four, the previously imported jazzy ‘Go Go Swing‘ and ‘Here We Go Again‘ 12 inch medleys — and if you think I’m about to BPM a live go go double LP, I’m afraid you’ve another think coming! … Funkin’ Marvellous Records and Steinar share as main man George Hargreaves, who’s thus been able to promo back-to-back from both labels a teasingly introed 118⅔bpm Mark Berry remix of Lee Prentiss ‘U Me’ and a 0-112⅔-0bpm M&M remix of Mezzoforte’s chunkily jittering vocal ‘No Limit’ … Haywoode’s revival of ‘I’m Your Puppet’ was produced in Philadelphia by Nick Martinelli, a detail that might have helped had it been mentioned on the white labelled promos … Debut picked up Bobby McClure … Champion’s overdue reissue of Kinkina ‘Jungle Fever‘ will include a new scratch version by DJ StreetsAhead … Portsmouth label Domino Records’ next reissue will be the Michael Zager Band ‘Let’s All Chant’ … ‘Paul Revere’ for some reason has now replaced ‘No Sleep Till Brooklyn’ on the Beastie Boys’ 12 inch … UK 12 inch pressings may soon have to contain only a maximum 20 minutes of music, and twin-packed singles seem certain to be a thing of the past … MCA Records in the US have issued seven of their current black hits on cassette maxi-single, a test-marketed ploy being tried by other labels there too, fine for Walkman wearers but less so for DJs should this trend ever replace vinyl (or CD) … Fourth & Broadway label manager Ian Dewhirst sensibly suggests that, as well as standardised rules being applied to future Technics DJ Mixing Championships to prevent any ugly misunderstandings, the competition might also benefit from being split into two separate categories, for gimmicky showmanship and for scratch-type technique … Manchester mixer Rob Manley is now packing ‘em in and breaking new music at Wakefield’s Roof Top Gardens/Cassanovas, which has encouraged him to compile a mailing list of the North’s top club jocks in an effort to service them with new product and help break it further throughout that area — send full work details to him at 42 Emery Avenue, Chorlton-Cum-Hardy, Manchester M21 2LF, provided you work either side of the Pennines and play more than the hits … Peter King (0675-63554) is updating the Midlands’ mailing list for SuperJocks, and after mid-week PAs for his own venue, Madisons … Nicky Holloway’s Rockley Sands soul weekender attracted a proper soul club crowd, with no shaving foam but a good atmosphere, and will be repeated on October 16-18 … Sunday (5) Birmingham Powerhouse’s 3pm alldayer has a DJ throwdown including UK finalists Scooby Swift and kitchen sink-toting Johnny Jay … Chuck Stanley, Tashan and Oran ‘Juice’ Jones, with busy duettist Alyson Williams in support, comprise a Def Jam US Soul Attack tour over Easter, hitting Manchester International Club (18), Nottingham Rock City (19), London Camden Palace (20/21) … Rick Robinson’s jazz plus lager at 60p a pint are packing Saturday lunchtimes at Chertsey Bridge’s Cricketers … Bournemouth Clouds’ Monday ‘Soul Train’ has new school Alan Matthews and old school Paul Anthony varying the vintages on the two back-to-back floors … Pete Haigh, souling Blackpool’s The Club on Fridays, above Talbot Square’s Rumours, is desperate for the seven inch Silk ‘I Can’t Stop‘ and will swop Randy Brown ‘Always In The Mood‘ on 0253-824156 … Shirley Murdock’s new US 12 inch of her crawling ‘Go On Without You‘ slowie is flipped by the just UK-issued ‘As We Lay (Horizontal Mix)‘ in a much louder pressing … Rob Moir says thanks and goodbye to all at his Chester and North Wales venues as he jets off to Spain for the summer season … James Lewis (Swansea Whispers Thursday) is probably not alone spotting similarities in the rhythm between Tullio De Piscopo and the early Seventies Italian hit, Adriano Celentano ‘The Language Of Love‘ … Peter Sievewright (Perth Yorky’s) wonders whether Jimmy Ruffin ‘What Becomes Of The Broken Hearted’ will make it onto a 501’s commercial … Lola’s ‘Wax The Van’ title in black American slang apparently means “going in by the back door”, if you get my drift … shoot me through the grease, LAH DE DAH DE! 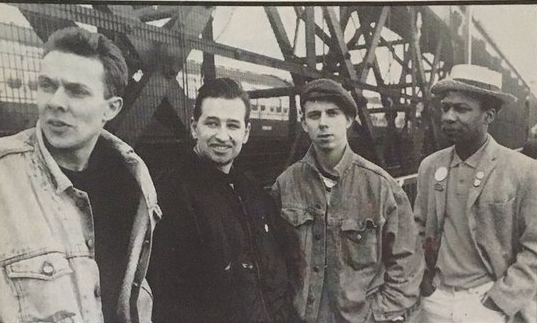 SIMON GOFFE (left) this Thursday (2) starts a new Across The Tracks night at Camden Lock’s Dingwalls in London, featuring all sorts of black music with the help of regular guests, beginning this week with rare groover Norman Jay (right), then funkster Nicky Holloway (centre left) and jazzer Gilles Peterson. Of course another name for the night could have been Canal Street Blues…

GRAEME PARK built Nottingham’s The Garage into a legend but has now moved with his upfront funk to that city’s newer The Barracuda, in Hurt’s Yard, every Tues/Saturday, leaving him more time to gig on other nights around the country. The dude is def.

Last week I mentioned how during some friendly banter with her, I gradually realised that it was none other than DEE DEE BRIDGEWATER (above, with yours truly) who was standing beside me at Maze’s Hippodrome party (not difficult to deduce, as there aren’t many Paris-based Americans currently appearing in the West End!) She’s playing Billie Holiday in the one-woman show ‘Lady Day’, which from April 10 is transferring from the Donmar Warehouse to the legit Piccadilly Theatre for a two month run. Also, just out here is her jazz trio-backed ‘Live In Paris’ LP (Affinity AFF172), not for dancing but great listening. Be like her number one fan, Steve Davis, and catch her if you can!

Established as a soul DJ around Camberley for the last ten years, Phonogram’s new disco plugger (and Buddy Holly lookalike) now really does have to spell his name as JOHNNY WALKER, to prevent confusion between his proper spelling and Radio One’s prodigal son Johnnie Walker!

CAMEO ‘Back And Forth’ (Club JABX 49)
Drastically remixed and opened out, their album’s hottest track now has a disjointedly jacking stereo title line vocal intro before the smacking 111⅔pm beat starts strutting jauntily through different phases to reach at last the catchily repeating roundelay lyrics, although the whole thing ends up overall with more instrumental than singing, gunshots and gurgling electronic voices punctuating the freakier dub (dustbins rattled and organ chorded itchy staccato 112¾bpm ‘You Can Have The World‘, too). Uniquely Cameo.

FLEETWOOD MAC ‘Big Love’ (Warner Bros W8398T)
I know it seems extraordinarily improbable, but this is house! Surging through 0-125¾-125½-125¾-125½bpm ‘Set If Off’ cymbal, pounding piano, jack track stutters and a typical episodic Chicago structure, its only prevented from being totally authentic by just a tiny bit of vocal early on. Honest! The irony is it’ll probably be the first crossover house hit in the States.

JIM BENNETT & HIS BUMPIN CREW ‘Bump & Roll (Give Up The Funk)’ (US Studio Records STU-1411)
Deserving to take over where Lorenzo Queen left off as easily the best and most commercial go go since ‘You Can Dance (If You Want To)’, this similarly well arranged infectiously weaving 103⅙bpm bumpy bubbler has a deadly simple synth riff and some nice neat piano fills behind Jim’s rhythm-riding exhortations (inst flip).

WOOLY REASONABLE & THE YO CULTURE ‘You’re The Only One’ (Club JABX 45)
Never as big as it deserved to be on import last year, this Duke Bootee-produced fascinating wriggly 103⅔bpm nagger friskily judders through a distinctive Jamaican accented muttering girl, soft chanting, het-up guy, slippery scratching, squalling sax, whining guitar and compulsive jiggly beats (inst flip), as off the wall as ‘Wax The Van’ or ‘Sexy’ and just as well worth checking.

NORWOOD ‘I Can’t Let You Go’ (MCA Records MCAT 1115)
Creating fantastic fervour as it gradually builds out of an over-long nervily jittering start, this 101⅓bpm electro-gospel singer gets excitingly soulful once the Abrams/Vandross/Pendergrass-ish Norwood B. starts hoarsely hollering and moaning through intensely chanting sanctified supporters, with a great jangly piano break erupting from the rhythm near the end (edit and loping Luther-ish (0-56¼-)112½bpm ‘Don’t Let Love‘ flip). Be sure and hear it all, as it’s one of those that’s better the longer it’s on.

ZUSHII ‘Surprise, Surprise (Remix)’ (Debut DEBTX 3005)
Newly remixed by Damon Rochefort and Robin Sellars, this repetitive girl squeaked 101⅓bpm episodic jitterer wriggles brightly through various nice jazzily inflected breaks with a samba-ish kick, and was something of a sleeper in its Nigel Wright-produced 101½bpm original version (now on the flip), selling steadily for many months after its release.

MAXI PRIEST ‘Let Me Know’ (10 Records TENT 156)
Naggingly familiar (why do I keep wanting to sing “make my dreams a reality”?), this gorgeous bubbling 0-88⅙bpm reggae soul swayer has melismatic Billy Stewart-ish singing and timeless vocal group support (timeless since the early Sixties, this is!), with an equally nice jogging 85½bpm ‘I Dream‘ flip.

RULA BROWN ‘I Do Love You’ (Revue REV 043T, via Rhino)
Speaking of the late Billy Stewart, and his word-bending melismatic swooping soul singing style, here’s a straightforward very pleasant 60-89⅔-91⅔bpm reggaefication of his lovely 1965 classic, bridging for a while into its even more famous follow-up, ‘Sitting In The Park’.

JUDY BOUCHER ‘Can’t Be With You Tonight’ (Orbitone Records OR 12-21)
The UK equivalent of Southern Soul, a Country-tinged sweetly sentimental simple pedestrian 68¾-68⅔bpm slowie, for middle-aged smoochers. You pronounce her name “Bowcher”, as Phil Allen has only just learned!

RT & THE ROCKMEN UNLIMITED ‘I Want To Go To Chicago’ (Club JABX 51)
In fact sung by Wally Jump Junior’s Will Downing and Craig Derry, last summer’s disappointing Arthur Baker-created would-be house galloper has now had a frantic 122½bpm Farley ‘Jackmaster’ Funk remix that compresses the sound without improving the over-busy beat, his two new vocal dubs on the flip however being much more comfortably textured, spacious, and useful, the ones to try.

THE CLASSICAL TWO ‘New Generation’ (US Rooftop Records RT003)
The guys keep rapping in support of “new school” rap but their bouncily jiggling 98½bpm beat repeatedly cuts in Bobby Byrd’s “get on up”, which is about as old as hats can be now – how about finding some fresh beats for a change? – although the rhythm is good (96⅚bpm dub and ‘Chapel Of Love’-quoting murkier 86bpm ‘(She’s A) Freak Dog‘, too).

GLORIA GAYNOR ‘Be Soft With Me Tonight’ (Fanfare 12FAN 11)
Much blander and very differently treated steadily swaying 87bpm Stock-Aitken-Waterman mixed original version of the song also out by Helena, who I prefer, though this is undemanding (inst too).

CALVIN BRIDGES ‘Rose Of Sharon’ (Bluebird Records BRT 32)
Unlikely title for a tinkling and tugging huskily emoted (0-)90⅔-94bpm soul swayer, with an unsteady beat, all about the desert flower after which so many girls have been named (whether their parents knew it or not).