Yes folks, amidst a flurry of beat boxes and a slither of scratching, it’s time to announce the big ones for that year of destiny 1984! All statistics are derived from the year-end disco charts, for the contents of which you only have yourselves to blame — which leads us straight into . . .

THE REAL HITS OF THE YEAR:

ARTISTE OF THE YEAR:
Chaka Khan.

ALBUM OF THE YEAR:
Leon Bryant ‘Finders Keepers’ (US De-Lite/Club)

IMPORT OF THE YEAR:

WHATEVER HAPPENED TO:
Prelude?

IMPORT LABEL OF THE YEAR:
Private I Records.

COMEBACK OF THE YEAR:
The Temptations. END_OF_DOCUMENT_TOKEN_TO_BE_REPLACED 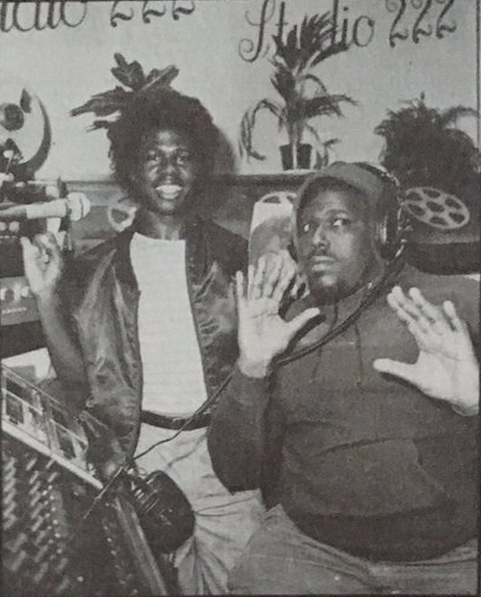 THE LIMIT: ‘Say Yeah’ (Portrait TA 4808)
Suddenly due in our shops on Christmas Eve — ‘cos let’s face it. it’s too hot to hold! — this breezily skittering 123bpm light snapper with Gwen Guthrie joining the chaps is the deadly catchy “say-yay-yay-yay-yeah!” singalong smash that’s already number 2 in our chart just on import. UK copies will have the as yet unheard ‘Destiny‘ added to the 12in inst flip.

AMII STEWART: ‘Friends’ (RCA RCAT 471)
Exploding as predicted now that European imports have finally flooded in, this unexpectedly beautiful almost ‘I’m Not In Love’-like gently bubbling 0-94⅓bpm soft soul swayer is truly haunting and should with luck (her past Wally hits will help at Radio One) cross over to a wide public — don’t miss it (inst flip).

SOUNDTRACK: ‘Breakdance 2 — Electric Boogaloo’ LP (Polydor POLO 5168)
Hollywood’s quickie follow-up film again has OLLIE & JERRY providing its title track, a chunky 112bpm lurcher obviously led by straining Jerry Knight with whinneying support and stronger than it struck me on 12in, plus their stark skittery 124⅓bpm electro ‘When I.C.U.‘, while the FIREFOX girls return on the jerkily strutting electro 121½bpm ‘Radiotron‘ and similarly backed but more soulful 125bpm ‘Stylin’ Profilin’‘, oldies being GEORGE KRANZ’ eccentric 123bpm vocalised drum solo ‘Din Daa Daa‘ and MIDWAY’s D Train-ish 119½bpm ‘Set It Out‘ (both abbreviated), CAROL LYNN TOWNES’ Hi-NRG pop 135bpm ‘Believe In The Beat‘ being due as our first single, MARK SCOTT’s ‘I Don’t Wanna Come Down‘ being a Michael Jackson-ish fast 129⅓bpm jolter and STEVE DONN’s ‘Gotta Have The Money‘ frantic 164½bpm flashdance —however, the one that’ll do the business here is RAGS & RICHES ‘Oye Mamacita‘, a light 117⅓bpm Latin chugger reminiscent of the Chakachas’ ‘Jungle Fever’. END_OF_DOCUMENT_TOKEN_TO_BE_REPLACED

GAP BAND: ‘I Found My Baby’ (LP ‘Gap Band Vl’ US Total Experience TEL8-5705)
The guys repeat their enduring underground smash ‘Outstanding’ bar for bar at 97bpm but now with a flavour of Fatback’s ‘I Found Lovin’’ – and as both are still instant floor fillers in black clubs this is off to a great start! – while ‘Disrespect‘ is a Woody Woodpecker-introed whistle blowing easily rolling and swaying 107¾bpm groove with chanting from halfway, ‘The Sun Don’t Shine Everyday‘ a particularly beautiful very delicate tenderly started 52/26bpm slow smoocher building in a Marvin Gaye influence (fragments of its instrumental link some other tracks), ‘I Believe‘ an interesting old fashioned yet Stevie Wonder-ish tortuous 73-0bpm weaver, ‘Beep A Freak‘ (the US 12in) a perfectly serviceable repetitive 114 ¼bpm P’funker, ‘Weak Spot‘ a rambling 106bpm soul swayer, their inevitable fast ones being the frantic 136½bpm ‘Video Junkie‘ and jerky 134½-137bpm ‘Don’t You Leave Me‘. Now, how about a megamix of ‘Outstanding’ and ‘I Found My Baby’ as UK 12in?

ASWAD: ‘Need Your Love (Each And Every Day)’ (Island 12IS 214)
Nice lazily soulful attractive 83bpm reggae swayer ending in its dub.

ATTENTION DJs! Please post your charts and all Christmas/New Year gig info NOW to arrive this coming Monday (10) or else you’ll be too late for inclusion in the Dec 22 issue, and likewise next Thurs/Friday aim for Monday (17) delivery to catch Jan 5. We’ll be back to normal (ie: previous Wednesday 2) for the Jan 12 issue, but especially at this busy time for everyone we really need ya to keep ‘em coming!

MASCARA: ‘Baja’ (Personal 12PER 110)
‘Jingo’-ish jaunty rattling 122¾bpm bounder with Spanish chattering chix and Kid Creole-ish rapping chap going into a vibes-based conversational break (useful Instrumental Dub and echoey Ruff Mix flip), mixed by Jellybean and huge in US clubs as is anything he touches. A stiff on import, but then even ‘Jingo’ took time to explode.

SHEENA EASTON: ‘Strut (Dance Mix)’ (EMI 12EMI 5510)
Starkly percussive powerful 114⅓bpm jagged jerker building intensity as it motorvates along behind chanting shrill Sheena, monstrous in the States since the summer and given the chance likely to do a Madonna here. I think it’s terrific! END_OF_DOCUMENT_TOKEN_TO_BE_REPLACED

Pennye Ford appears to be Sharon Redd’s sister, although oddly her biography confirms everything but that … Kool & The Gang’s LP is now out here (De-Lite DSR 6, ‘Misled’ being [unreadable] bpm), as is Deodato’s (Warner Bros 825 175-1), BPMs fractionally different from review) … James Ingram’s remix is due here January, when Chaka Khan’s follow-up will be ‘This Is My Night’ … Second Image return after Xmas with the aptly titled ‘Starting Again’ and jazzily instrumental ‘Ovo Mexido’, both soulfully harmonised swayers mixed by The Quick … Leroy Burgess (anything featuring his voice) seems to be an avidly collected hot property in certain quarters of black London … I’ve belatedly seen ‘Purple Rain’ and find significant Prince’s evident attitude to the more traditional black music exemplified by The Time’s two numbers (and some of his own more soulful rolling-on-the-floor screamers), the style which eventually makes him a star in the film and which he seems most genuinely to enjoy – and which he’s featuring on his current US tour – being unadulterated rock: taking the plot as loosely autobiographical, we must assume in real life his increasingly controversial early hit singles were but cynical confirmation of the black stereotype expected of him by the colour-coded US media until such time as his outrageous image had made him big enough to leap the barrier with ‘Little Red Corvette’ and rock like the Jimi Hendrix he now seems to emulate – he must, of course, have known all along that the white mass market will always prefer a rock star to a soul star (the film itself is basically just a remake of Elvis Presley’s ‘Loving You’ in many respects, my own favourite bits being indeed The Time, and Apollonia Kotero’s corset!) … Morris Day as reported has now split from The Time following the popularity of his scene-stealing “shuck and jive nigger” role in the film, the somewhat unkind send-up nature of which he himself may not have realised … London’s Hippodrome a year late on its first birthday finally launched its much ballyhooed “spaceships”, lighting loaded contraptions which came creaking across the ceiling at about three feet per minute to underwhelming response and looking, to quote Phonogram’s John Waller, “like my bathroom heater!” (the effect would have been better without up-lighters showing the suspension gantry), yet Peter Stringfellow kept babbling on, when the painful sound system didn’t cut out on him (as it did also in the middle of a mimed Rondo Veneziano PA!), about how only London and not New York could manage such a stunt — for the self-proclaimed “best disco in the world” the whole evening was not very impressive, showing that the world Stringfellow lives in is one of his own, and I’m afraid that my other companions including Theo & Joy Loyla, Kev Hill, Kim & Clare all agreed it was a shame the way it just begged sarcasm (by and large we’d rather have been at Flicks!) … Jez Nelson of Solar-FM’s Friday 7-9pm fan show (he’s at Bromley Dr Crippens Thursdays) and colleague Gilles Peterson are compiling an all-time Jazz Top 100 for Xmas broadcast: all (not just local listeners) are invited to send top ten nominations to him c/o Unit 1, 8-20 Well Street, London E9 … Les Knott explains his Harlow Hospital Radio party chart was compiled from local disco DJs for broadcast to the bedbound patients! … Hugh Williams, soon to leave the Black & White disco in Interlaken’s Hotel Metropole, warns jocks heading for Switzerland his slow-changing hits are Sandy Marton ‘People From Ibiza‘, Carrava ‘Shine On Dance‘, Paul Sharada ‘Florida (Move Your Feet)‘, P. Lion ‘Dream‘, Fancy ‘Chinese Eyes‘ — and, despite these, breakdancing is big news there … Frank Sammes in the Thames Valley DJ Assn’s current ‘Disco Action’ mag writes good advice for DJs about not buying more records than you can reasonably expect to use at the type of gigs you do (unadventurous maybe, but the richest jocks play the same old party records and just the biggest hits) … Flash Gordon, commuting home for Fri/Sat at Bristol’s Faliron Greek restaurant and a Wednesday night slot talking about record collecting on BBC Radio Bristol, now manages the London branch of Plastic Wax Records at 17 Westbourne Grove, offering 10 per cent discount on oldies and newies to bona fide DJs … Sandy Martin, whose Friday ‘Disco-Trekin’’ show on Wiltshire Radio, 96.4/97.4FM is 9-11pm, points out the Pointer Sisters also recorded Prince’s ‘I Feel For You’ on 1982’s ‘I Am So Excited’ LP, and that Chaka Khan’s real name is Yvette Marie Stevens (incidentally her sister Tasha Thomas recently died) … Norman Scott, reminding us Paul Parker’s current ‘Without Your Love‘ was originally by Cut Glass on RCA in 1980, is now joined by Colin Peters Saturdays at Haringey and circulates Sundays between the Bolts at Brighton, Bournemouth and the newly opened one in Luton RoneIles … Daryl Stafford (Bournemouth Cabaret Club) regrets that gay music ever got called “Hi-NRG” as the identikit formula then adopted by some UK record producers (he excludes Ian Levine) has helped fuel the growing Anti-Hi-NRG movement in gay clubs … Record Shack following the collapse of IDS is now distributed by EMI, so ‘Heartless’ should be back in stock (Evelyn Thomas, who’s sung backups with them, penned Fatback’s next single) … New Edition ‘Cool It Now‘ topped US Hot Black … Big Phil Etgart, surprised Angela Bofill wasn’t hotter as it’s great out of Thelma Houston, starts weekly with Gary Steele & Paul M at Berkhampstead’s Old Mill Hotel Fridays, when Tim Westwood hip hops Forest Gate Upper Cut’s roller disco while Zero Gravity reggaes the back room dance club … Pete Tong souls Chatham St. George’s Hotel The Music Parlor Sun (2), London Bridge Tooley Street Royal Oak Mon (3), when Steve Walsh funks Tottenham Silver Lady … Judge Dread’s “naughty disco show” hits the Bier Keller circuit in Leeds Mon (3), Blackpool Tues (4), Liverpool Wed (5) … Chris Dinnis souls Exeter Boxes Wed (5) … Roy Ayers has an RANYCBA, mane’s a JHLTBA, what’s yours? … Sophia Loren to guest in ‘Hill Street Blues’?! … Taurean Blacque to guest at Street Sounds’ Xmas party???? … SAY-YAY-YAY-YAY-YEAH!

THE INTRUDERS: ‘Who Do You Love’ (Streetwave MKHAN 34)
A delayed action explosion on import, this rhythmically War-like gospelly-sung superbly soulful 0-118bpm trotter is packing floors thanks to its “who do you love — is it him or is it me?” catch line (inst/edit flip).