Morgan Khan is the “brat from PRAT” no more, the atmosphere of the Pye/RCA RATCRAP merger making it a logical step for him to resign last week (amidst an evident outcry from PRAT’s R&B licensors), but unlike others in this currently troubled time he has some sensational plans (really) which should result in a giant leap for black music before very long when all can be revealed – although it’s safe to say now that his enthusiastic devotion to hard work will be earning respect rather than resentment in the future . . . Surface Noise’s new ‘Dancin’ On A Wire’ was not in fact completed by last weekend so the anticipated acetates obviously didn’t appear then . . . Al Jarreau ‘Distracted’ turns out to be on full UK 12in . . . Fatback ‘Backstrokin’ is due on UK 12in this week . . . Stacy Lattisaw’s next will be ‘Dynamite’ early next month . . . Teena Marie’s I’m A Sucker’ remix is only the flip of her 12in, the 7in being ‘Aladdin’s Lamp’ . . . MCA’s current 12in releases presumably do exist as I haven’t actually seen ‘em myself yet (Ray Still please note) . . . Aurra ‘When I Come Home’ has had a killer bass-heavy remix by Larry Levan (US Dream DG 705), and Community People ‘Education Wrap’ has re-emerged in basically instrumental form as ‘Education Rock’ (US Delmar Int’l) . . . Camberley Frenchies’ Robin Nash and Paul Wheeler open their club Jacksons in Staines soon, with pure jazz Thurs/Fri/Saturdays and a Sunday Californian ‘Cruising’ oldies format, aimed up-market (but of course!) . . . Steve Dee’s regular Brix residency near High Wycombe was completely destroyed by fire recently, he then went to check a venue he was due to appear at in the autumn and the next day – well, you all know what happened to that, it was Alexandra Palace! – and so now Steve’s sunning in the Canaries and hoping his answering machine (0494 443508) will be full of much needed bookings on his return . . . Chris Britton is touring the East Coast’s disco pubs, clubs and holiday camps with the Pernod Summer Road Show next month, when similarly Stuart Gensian promotes Crocodillo sparkling wine in slightly swankier spots around East Anglia . . . Martin Collins, despite happy funkateers, was ordered to play more commercial music at Ware Beckets and told the management that maybe they needed a commercial DJ instead – still, he had fun filling in for Froggy at the Royalty last Saturday . . . Froggy had fun buying records at New York’s Downstairs Records last Saturday at just about the time Martin was depping for him . . . Nicky “The Zit” McKenzie has a new position under Cuddles Canter – jocking downstairs at Mayfair Gullivers, that is! . . . Tom Browne was evidently good value doing club PA’s here, playing along on his horn . . . New York’s black disco-goers were a disappointment as they seem to have forgotten what good music is although they greeted Raydio and the Gap Band with excited whoops . . . Chris Hill, now back from his US travels, sent a postcard saying “in four weeks in the US you learn to live without a lot of things, but I’ve got a real Jones for your RM page – WHATZ HAPPENIN’? I saw the June 28 copy and I know it by heart!!” 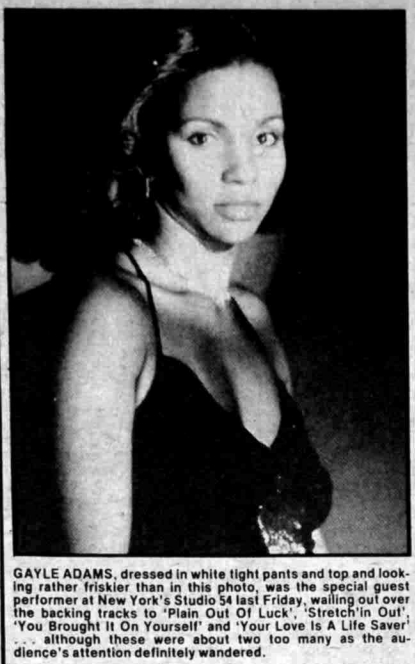 QUEEN: ‘Another One Bites The Dust’ (from LP ‘The Game’, EMI EMA 795) (BNDA debut 8/9/80)
New York’s hottest disco newie last week thanks to a US Elektra 12in promo circulated to key jocks, this you may misguidedly dismiss as DOR until hearing that amazingly it’s a bass-heavy ‘Good Times’-structured, 110bpm funk bumper compatible with many current disco hits – I kept hearing it played very loud and mixed with Raydio ‘For Those Who Like To Groove’, for instance! Check it.

JEAN CARN: ‘Was That All It Was’ (Philadelphia Int’l PIR 13-8840) (BNDA debut 12/22/79)
Loosely structured somewhat doodling yet tension-filled languidly smacking superb subtly building strangulated 114-116bpm 12in wailer speeds up only towards the end and, while passionately loved by its fans, never got as big on import as it deserved to be.  END_OF_DOCUMENT_TOKEN_TO_BE_REPLACED 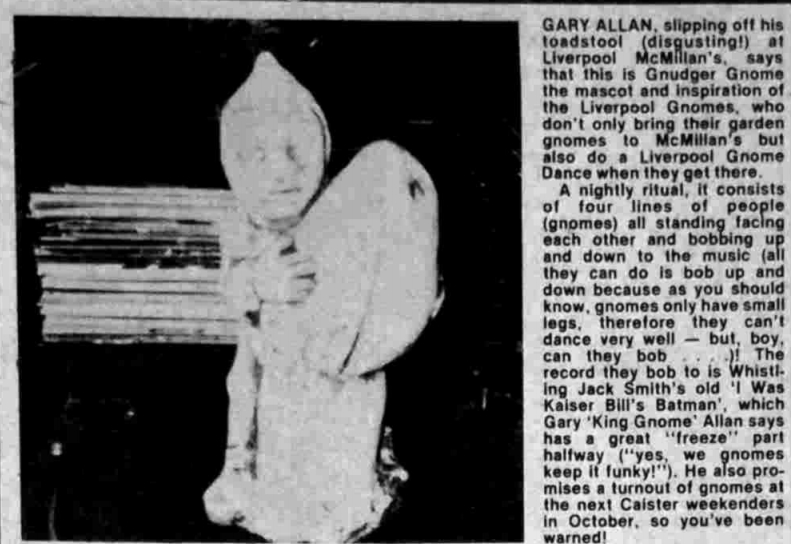 It’s been an “excruciatingly dull” week for imports, to quote Groove’s Chris Palmer, with nothing new worthy of review, but meanwhile back in Britain . . .

GEORGE BENSON: ‘Give Me The Night’ LP (Warner Bros. K56823) (‘Give Me The Night’ BNDA debut 7/12/80)
Quincy Jones-produced sensational set, largely penned by Rod Temperton and featuring Lee Ritenour on second guitar, the monster 110bpm title track (like a slower ‘Stomp!’) being due on 12in next week, others being the subduedly angry 124bpm ‘Off Broadway’ instrumental skipper, lushly jogging 114/57bpm ‘Love X Love’, scatting 118bpm ‘Dinorah Dinorah’ instrumental, lovely 30/60bpm smooching of King Pleasure’s classic ‘Moody’s Mood’, AWB-ish 51/103bpm ‘What’s On Your Mind’ slowie, swaying 39/79bpm ‘Midnight Love Affair, and a brace of atmospheric old Heatwave smoochers, the 0-22-44-bpm ‘Star Of A Story (X)’ and 37bpm ‘Turn Out The Lamplight’.

BABY ’O: ‘In The Forest’ (Calibre CABL 505) (BNDA debut 4/26/80)
Thunderously rattling and jumping 126bpm 12in Latin party leaper is already huge on import and should be another Odyssey as it’s well established especially with MoR and Wally crowds.  END_OF_DOCUMENT_TOKEN_TO_BE_REPLACED

Surface Noise’s Chris Palmer of Soho Greek Street’s Groove record shop is now compiling Radio Luxembourg’s import chart show (Fridays 9-11pm), which should give it more credibility . . . EMI’s disco dept (ie Gof Abbey) and lots more personnel have been made redundant from the end of the month, and Motown will move back to EMI’s Manchester Square offices . . . Jermaine Jackson ‘Burnin’ Hot’ is due on 12in this week . . . George Benson’s 12in LV B-side will be ‘The World Is A Ghetto’ / ‘Breezin’’ – is that hot or is that hot?! . . . Herb Alpert ‘Beyond’ on 12in evidently should indeed be printed 33 1/3rpm, making it 126-127-126bpm after all, though I think the B-side is at 45rpm . . . Isaac Hayes ‘I Ain’t Never’ is due again with original flip on UK 12in but now in its US promo extended 125-126-125(“go head”)-127bpm 10:26 remix . . . Narada Michael Walden ‘I Don’t Want Nobody Else’ / ‘You’re Soo Good’, Mass Production ‘Cosmic Lust’ / ‘Gonna Make You Love Me’, Sun ‘Space Ranger’ / ‘Hot Spot’ / ‘Quest’ will be on UK 12in ere long . . . Sadao Watanabe featuring Dave Grusin & Eric Gale is the latest Japanese digital recording to create a stir on JVC’s Flying Disk label . . . Herbie Hancock’s US 12in of ‘Go For It’ (US Columbia 43-11310) has a much extended ‘Stars In Your Eyes’ as flip . . . Ariola’s Erskine T has reserviced Delegation ‘Put A Little Love On Me’ from last Xmas, while EMI jocks have had a US Capitol promo 12in of Helen Reddy ‘Take What You Find’, a cool chugging 111bpm DOR thudder like Blondie singing current Cliff Richard . . . Motown’s 20th Anniversary is celebrated by the September 5th release of a special box set (which you’d better order now as it’s for immediate deletion) containing 20 double-sided Top 40 hit singles (40 titles), a badge plus the hitherto unreleased Marvelettes ‘Finders Keepers Losers Weepers’ (is that the Nella Dodds song?) c/w Kim Weston ‘Do Like I Do’ . . . PEEL’s latest sponsor-disc development is a flimsy 7in radio commercial advertising a cinema programme – but surely DJs would find it even more useful without backing music so that they could run the message over an instrumental break of their own? . . . Capital Radio’s Graham Dene and his producer Mike Childs are now travelling with me to New York on Sunday (I’m going more for fun than the forum, if Blackburn’s Martin Platts doesn’t object) – and did you catch the hysterical tape on Capital that put Graham and a stumbling lady phone-in contestant to the backing of ‘Je T’Aime’ with amazingly pornographic results?! . . . Alan Jewell (Finchley Road Les Elites) would have come to New York but will lose his day job if he does – oddly enough at Elite Motors (no relation) . . . Tony Jenkins (Mayfair Playboy) will be auditioning DJs for a new central London club, apply to him at 55 Greenacres Avenue, Ickenham, Uxbridge, Middlesex . . . Richard Lofthouse, 8 years a DJ at such Newcastle-upon-Tyne clubs as Julies, Playground & Grobs, is going mobile again with his jazz-funk Lofty’s Roadshow (Newcastle 681913/775401) . . . Kev James of au-pair fame is mobile on Wednesdays (such a busy night of the week) through PSD agency (01-267 7534), and says that as Mondays at Golders Green Great Expectations will soon be a Doctors & Nurses night (for real), he’ll give free tickets to any genuine nurses (and au-pairs) who can supply proof with an SAE at the 911 Finchley Road club . . . Iain Goodkind at Hendon’s Groove Line record shop now does Wed/Fri/Saturdays at Finchley Road’s redecorated Purple Pussycat (in Lithos Road), and reports Chic’s latest is a real floor-clearer . . . Kelly returns to jazz-funk Wigan Pier next Tuesday, flying up from Brighton Sherrys, his Mon-Saturday residency now which is getting a massive refit by Bacchus . . . John DeSade seems to be at Gravesend Wings every Thurs/Friday and Sheerness Woodys on Tuesdays . . . Northern club-owning Pete Stringfellow’s new plush Stringfellows next to Peppermint Park in St Martins Lane evidently has a jacket & tie policy, which may prove too provincial for the type of smart fashion-conscious Londoners it might otherwise attract . . . Wild Walt Brown (Surbiton) of the zany DJ style can be seen in the odd High Street on the back of a Ford Ranchero playing hillbilly music and extolling the virtues of Kentucky Fried Chicken, much to people’s amazement! . . . Sean “Slimline” French celebrated his birthday at the Royalty last Saturday, then with Tom “No Buns Please” Holland and Martin Collins (who’s skinny anyway) came to Gullivers to see James “Thin Man” Hamilton and Fatman Graham “Call Me Cuddles” Canter (who let the side down rather) . . . Jo Field, now helping on Glen Olds’ import stall in Hemel Hempstead and Hatfield markets, warns Sean French that eggs on toast are fattening! 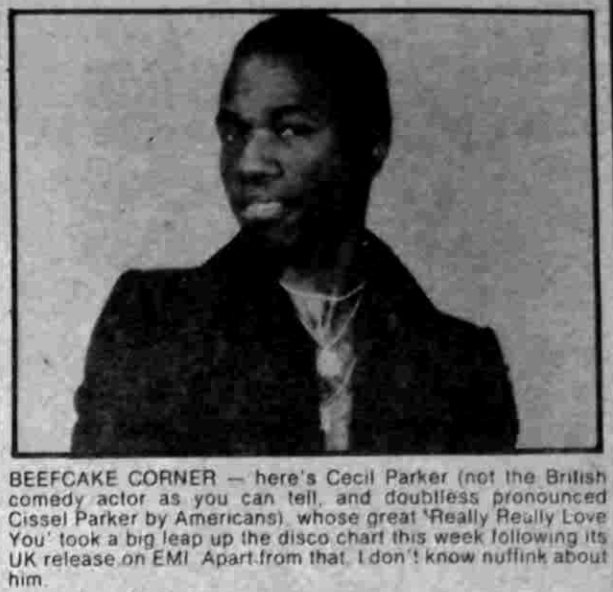 SHAKATAK: ‘Steppin’’ (enquiries to Les McCutcheon, 0602-410055)
On unidentified moody white label and well worth finding, this lovely lazily swaying classy instrumental 99bpm 12in jazz piano jogger obviously has ‘The Groove’ in mind as though much slower it unnecessarily keeps stopping almost too often for comfort. Similar quality jazz (nothing amateur about these) are the flip’s two tracks, the skipping 131-130bpm ‘Killing Time’ and atmospheric dead slow 31bpm ‘Lumiere’. Are they British or American?

B.T. EXPRESS: ‘Give Up The Funk (Let’s Dance)’ (Calibre 503) (BNDA debut 4/19/80)
4-track 12in containing two songs in different versions, this great funkily burbling chugger in a slightly fast 116bpm “original” and much slower 112(intro)-113bpm longer “remix”, the jauntily pushing variety-filled ‘Does It Feel Good’ staying at 117bpm for both editions.  END_OF_DOCUMENT_TOKEN_TO_BE_REPLACED