ROYALLE DELITE: ‘(I’ll Be A) Freak For You’ (Streetwave MKHAN 51)
Nearly a year old, the Brooklyn girls purposefully wriggling here 108½bpm hauntingly moronic nagger never charted in a big way yet has hung on in certain of London’s low dives as an underground monster, now finally to hit the nation flipped by a new clever Derek Boland-cut, scratched ‘n phased 108½-108bpm Good Groove Mix (edit too). 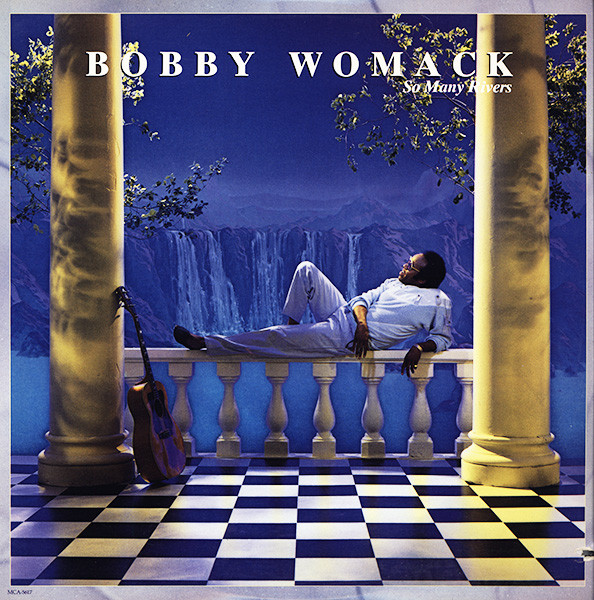 BOBBY WOMACK: ‘So Many Rivers’ LP (US MCA Records MCA-5617)
Hottest release of the week and because of an early deadline I haven’t time to review it properly! Rest assured that if you’re into Bobby you’ll simply love it, although as a dance set its not strictly essential unless you and your crowd love soul.

BROOKLYN BRONX & QUEENS (B.B.&Q.) ‘Minutes Away’ (Cooltempo COOLX 112)
Their album’s attractive crawling Curtis Hairston crooned 0-75½/37¾bpm ballad has been extended, and flipped for real power by a punchily jolting 112bpm remix of the chunkily chugging ‘Main Attraction‘ — which indeed it probably will be, so far as discos are concerned. Good value.

THE THREE DEGREES: ‘The Heaven I Need’ (Supreme Records SUPET 102. via PRT)
From the same team as Princess and like her selling in some lucky shops on single-sided white label ahead of release on September 16, the girls return is a brightly snicking and ticking 110bpm choppy unison harmony pusher that at last gives them a modern, smash bound, credible sound again. END_OF_DOCUMENT_TOKEN_TO_BE_REPLACED

RENE & ANGELA: ‘I’ll Be Good’ (Club JABX 18)
Even more potent than their last one, this soulfully het up rumbling purposeful 108¼bpm slippery snicking pusher sounds like Yarbrough & Peoples produced by Jam & Lewis, and is guaranteed to melt your stylus (thunder introed attractive 73bpm ‘You Don’t Have To Cry‘ flip). Hot!

ATLANTIC STARR: ‘One Love (Remix)’ (A&M AMY 273)
Not quite another ‘Silver Shadow‘ although their LP’s next hottest cut, this jolting (0-)108¼bpm jiggly tripper has been remixed already and builds nagging tension, with almost inevitably their old classic 79bpm ‘Touch A Four Leaf Clover‘ as flip.

COLLAGE: ‘Romeo Where’s Juliet?’ (LP ‘Shine The Light’ US Constellation MCA-5564)
This great beefily lurching 107¼bpm rolling driving groove by Larry White’s seven man band has been bubbling under our chart on 107bpm 12in (US MCA-23558, the same length mix but with good longer dub too), finally to rocket in on LP with the excellent semi-falsetto solid 89½bpm ‘Winners And Losers‘, attractive Shalamar-ish 111¼bpm ‘Step Right Up‘, buoyantly “fresh” 0-120bpm ‘In The Mix‘, rockily chugging 113¼bpm ‘Kickin’ It‘, soulfully doodling 74bpm ‘Here And Now’, Ollie & Jerry-ish 118bpm ‘Let’s Rock And Roll’, slushy EWF-ish 0-74bpm title track all adding up to a strong set.

JAKI GRAHAM: ‘Heaven Knows’ (EMI 12JAKI 5)
Out next Monday, her soulfully wrought slow swaying rhythmically hesitant 90-0bpm much admired oldie has been spaciously remixed by Derek Bramble so all the instruments are precisely placed amidst the overall echo (which for disco use possibly should be tightened up). END_OF_DOCUMENT_TOKEN_TO_BE_REPLACED

JOHN MORALES, currently the hyperactive half of the famous M&M Mix partnership, makes such a good living from remixing records that at first he may seem an unlikely ally in my campaign to halt remix mania. However, he has this foreboding that a big change is coming — brought upon themselves by the record companies, whose present course if unchecked will kill the goose that lays the golden eggs.

“All these re-remixes are jeopardising my future livelihood, especially when record companies don’t care what they sound like so long as they’ve got something different to sell again. I want to be hired because I do good work and people trust me, but now I’m being hired just because I’ve got a bit of a name. If they see my name splattered over all these remixes people will say I’m only doing it for the money and don’t care any more. I’ve turned down more work than I’ve done but even so on this trip to London I’ve remixed 11 records in just two weeks. When I do a remix I deliver the remixed A-side, a 7in edit, and a different dub version for the B-side — all of which would be on the same 12in in the States, but in Britain the B-side dubs are being held back for use as another later A-side or at least part of the follow-up. This is not what I intended. It gives the wrong impression to the public who will think it’s me who’s exploiting them because my name is on more releases than it should be.”

John agrees that if the companies don’t already they’ll soon realise that all the different mixes are costing them more (in goodwill as well as money) than any short lived marketing advantage is worth. He reckons shops no longer want to order 500 copies of a record in case they’re left on the shelf when a remix arrives, so instead they order fewer copies of the successive remixes that the companies will soon be in the position of having to put out just to sell records at all. (In practice the best serviced chart-return shops have bargaining power and can swap unsold mixes, but that adds up to an even bigger waste and loss even if a doubtful status quo is maintained in the chart.)

We both say, the rot has got to stop! On a lighter note, before returning to join Sergio Munzibai in New York remixing DeBarge’s ‘You Wear It Well’, John confided that the only remixer he rates in Britain is Paul Hardcastle. He’s had his name splattered about in even larger letters than M&M!

HOWARD JOHNSON: ‘Stand Up’ (A&M AMY 266)
Rock solid rather than inspired, this wailing forceful 111½bpm thumper is all beat and feel (flipped by the classic old 0-113bpm ‘So Fine’ and 102½bpm ‘Keepin’ Love New’), whereas on his LP ‘The Vision’ (A&M AMA 4982) the Jam & Lewis-prod/penned outstanding 0-108¾bpm ‘Knees‘ really refreshes jaded ears with its adventurous loose combination of English accented chat-up lines, female whispers and climax moans, pent up stereo multi-tracked gurgling and yodelling, all wriggling and weaving through a lopsided beat that’ll truly make it the ‘Encore’ of ’85. Flyte Tyme also supply the sharply jolting 109bpm ‘Older Girl‘, but disappointingly routine are other teams’ 118bpm ‘So Tuff‘, 118½bpm ‘Show Me How‘, 113bpm ‘Outta My Head‘, 0-60½bpm ‘All We Have Is Love’, 131bpm ‘You’ve Got A Lot To Learn’.

LUKK Featuring FELICIA COLLINS: ‘On The One’ (US Easy Street EZS-7518)
One of those natural monsters that sound right in the pocket on first hearing, a languidly rolling 104¼bpm jiggler like Five Star singing to a Jocelyn/Jenny-ish backing, nagging as hell (inst/edit flip).

HARLEQIUN FOUR’S: ‘Set It Off’ (US Jus Born Prod JB 003)
That’s the spelling! Strafe’s original was weird enough last year and this cover, although clarified, is equally odd — a constant cymbal shushed 111½bpm mesmeric pulsing rhythm eventually reaches some subduedly mixed chicks chattering and hissing, then finally trumpet and piano (dub flip), the basis for a million mixes (Gullivers Graham Gold synchs with ‘Single Life’) which looks like being massive after breaking first in Manchester. I have to mention that as they’re point scorers up there! END_OF_DOCUMENT_TOKEN_TO_BE_REPLACED

PETER ROYER: ‘Love Is In Season’ (Club JABX 17)
Sounding not unlike Phil Fearon, the ex-model and dancer for Loose Ends has been produced by that very group (with Jane Eugene and Julie Roberts on rather tentative backing vocals, plus — a big plus — Dexter Wansel’s tinkly piano on the instrumental dub flip) in a lovely just slightly reggaefied 103½bpm revival of the smoochy swayer, which already has a large lead over the now rapidly reissued DETROIT SPINNERS: ‘Love Is In Season’ (Atlantic A9648T) their gorgeous 101½bpm original having been huge on LP last spring but lost when released as a single months later, although now its 102½-105½bpm ‘Could It Be I’m Falling In Love’ flip will obviously be useful too. A shame there has to be a battle when both versions deserve to win.

NO ROOM and no time for full reviews and BPM’s this week, but I hope you’ll find the detailed report about Community Radio of adequate interest to compensate. However, if it’s any guide, the imports I bought last week were: END_OF_DOCUMENT_TOKEN_TO_BE_REPLACED