COFFEE ‘CASANOVA’ will be on UK 12in in a month, others on the way being Jermaine Jackson ‘You’re Supposed To Keep Your Love For Me’, Teena Marie ‘I Need Your Lovin’, Zapp ‘More Bounce To The Ounce (full LP version) and indeed Ernie Watts. ‘Just Holdin’ On’ (which varisynchs like dynamite for a long mix out of Roy Ayers ‘Running Away’!) . . . Geof Abbey still seems to be servicing jocks with certain EMI releases . . . BADEM’s well-run Dlscotek ‘80 exhibition over the week-end was much as usual but — surprise, surprise — fewer Djs than anticipated showed up on the public Saturday, while over the road in a pub room a much smaller breakaway Discoextra 80 show with only four or so exhibitors was an interesting addition . . . Soundout’s new mixer has all its control panel printing on the reverse of a translucent perspex plate so nothing will wear off, even the LED-type VU meters being flush beneath it in a somewhat disturbing way . . . Colin Snow of Rayleigh’s Record Man shop has a members-only jazz-funk Blue Note Club which this coming Wednesday (17) moves weekly to Rayleigh Croc’s, having been at Southend Scamps on Mondays (details O268-779722) . . . Funktion’s Friday debut at Mayfair’s Penthouse Club more then quadrupled the club’s normal attendance – but it still wasn’t as full as nearby Gullivers, where this last Monday Stevie Wonder had a private party which as anticipated would, with Wonderlove, take over the stage after a Bobby Thurston set (I write before the event) . . . Diana Ross would have come down Gullys on Saturday but the long queues put her off! . . . Camberley Frenchies is now under new management while the Wheeler twin’s new Jacksons in Staines is already no longer jazz orientated — although Chris Brown hopes to change that this Tuesday (16)! . . . Steve Jason says that Peterborough’s Kebab House in Bridge Street (next to the marital aids shop) is the local rival to Covent Garden’s Rock Garden for apres-gig DJ dining, regulars being himself, Dave Barry, Phil James, Steve Jones, Dave Peters, Vince King and assorted roadies, promoters, groupies . . . Eric Hearn, still at Liverpool Cagneys, has left the Timepiece “due to musical and financial considerations” . . . Stevie Allan says Liverpool Rotters’ funky main room pulls 1500 punters nightly, three nights a week . . . Tony Manson’s Disc Empire record shop in Chelsea Kings Road has imported a Japanese 7in edit of Sadao Watanabe’s ‘Nice Shot’ but it’s still £2 (plus 30p post), while Soho’s Groove sell Sadao’s new US Columbia ‘How’s Everything’ live double LP for only £6.99 . . . Groove Production’s next release is a slightly reggae-influenced densely textured c.86bpm soul remake of ‘Strawberry Letter 23′ by Bunny Brown, of Chosen Few/’Dancin’ On A Wire’ vocal / overpowering aftershave fame . . . Sean French marries Joanna soon — so that’s why he’s been losing weight! . . . Steve Walsh is down 1 ½ stone too, but he’s got a way to go yet.  CJ Carlos (Soho Hombre De Bahia), back from his hols and with a little moustache that he looks like old silent swashbuckler Douglas Fairbanks — and has anyone noticed how Princess Margaret’s son Viscount Linley looks amazingly like John Travolta?! . . . Steve Wiggins (Barry Freddie’s Bar) says the 36-24-36 blonde winner of his recent beauty contest only likes big fat cuddly men, so he’s stoking up on the cream buns and reckons Cuddles Canter could be right after all . . . Robbie Collins, recent recruit to Ilford Room At The Top, now also alternates with Jon Berry on Thurs/Fri/Saturdays at Hackney’s funky Flamingoes . . . Chris Britton will return from Honeymoon to a residency at Watford Bailey’s new disco within a disco, Juliets . . . Kev Hill (Brentwood) confirms that Chelmsford Our Price record shop has some great jazz oldies at 50p each . . . so THAT’S what Tony Hodges looks like! . . . Kwick ‘Can’t Help Myself’ is the new “rowing” record for Al Taylor at St Asaph Stables (Talardy Hotel) . . . Gary Oldis (Aycliffe Gretna Green) suggests Richard ’Lofty’ Lofthouse check with Phonogram’s Orin Cozler to confirm that last Nov/December his reaction reports were first from the North-East on ‘Oops’ . . . Jimmy Senyah, huge in London and moderate Midlands, seems inexplicably stuck in the chart despite having George Benson appeal – why? . . . Lakeside ‘From 9:00 Until’ has finally found its time, as it’s great with Locksmith and other funkers. Proton ‘Make Your Move’ chops nicely out of 80’s Ladies (instrumental), Rhyze ‘Do Your Dance’ is shaping up as a monster, and Starpoint slots in a lot better than my review may have suggested . . . Raydio’s Ray Parker plays on Michael Henderson ‘Wide Receiver’ and Michael played on Raydio’s ‘For Those Who Like To Groove’ . . . Nick Davies (Watford New Penny/Stevenage Bo Jangles) is the latest recruit to Lord Kitchener ‘Sugar Bum Bum’ (Ice 12in) for calypso fun . . . Jimmy ‘Bo’ Horne ‘Spank’ is still huge in Scotland for Jim Hunter (Coatbridge Taggarts) . . . Craig Dawson (Edinburgh), clever wee laddie, pairs Jam ‘Start’ and Beatles ‘Taxman’ . . . Showstopper Promotions want the world to know they had absolutely no connection with the Skegness National Funk Day . . . KEEP IT GOOD.

GROOVE WEEKLY, the free fanzine put together by some Fleet Street jazz-funk    fans and now (not surprisingly) available at the Groove Records shop, goes from strength to strength with the possibility of being properly printed with financial backing soon. The current issue has an excellent account of Cliff Rennie of Showstopper’s Bank Holiday Brighton Beach Party, where (in Cliff’s estimation) the hot toons were Locksmith ‘Blackjack’, Coffee ‘Casanova’, Rick James, William  De Vaughn, Cameron ‘Let’s Get It Off’, Ned Doheny, Lynx, Teena Marie ‘I Need Your Lovin”, Black Slate, Ramsey Lewis ‘High Point’ / ‘Colors In Space’ and Rhyze ‘Do Your Dance’, big oldies being Donald Byrd ‘Dominoes’ (of course), Eddie Russ ‘Zulus’, Crown Heights ‘Far Out’, Willie Bobo ‘Always There’, Gil Scott -Heron / Brian Jackson ‘The Bottle’, GQ ‘Make My Dream A Reality’ and Slave ‘You & Me’.  Keep it up, lads!

STEVE WALSH was amongst the jocks booked for the Skegness ‘National Funk Day’ recently, who did not find exactly what they were expecting. To begin with the site had been moved at the last minute to Ingoldmells, where only one of the two advertised marquees was erected and the promised “full adequate catering facilities” amounted to mobile hamburger, hot dog and waffle stalls – and evidently lust three lavatory caravans for the expected 15,000 crowd.  However, only something like a twentieth of that number turned up. Knebworth veterans complained but many of the others had a good time not knowing what they were missing and unaware of the dramas backstage, where a cash-flow problem had developed with performers wanting folding money and the banks being closed. Mass Production played and were paid (in part evidently by their own agent), Bobby Thurston did a voice-over PA as his band didn’t show up, Shakatak and the Rick Clarke Orchestra (containing several from Light Of The World) played, and all the DJs did a token spot. This is only half the story though, as to make the tent hire economical three days of activity had been booked, with a mums-and-dads holiday show starring Liquid Gold, Mud and some Coronation Streeters that had to be cancelled on the Sunday and a double bill (intended for two tents of course) on Bank Holiday Monday which paired a Mod/Northern all-dayer and an Elvis Presley event – It’s lucky there wasn’t a blood-bath! The Mod show went on, but was hardly enough lo prevent a loss of mega-thousand pounds. Let this be a warning to all would-be promoters that just because you copy someone else’s good idea it won’t necessarily work as well for you. The difference between success and failure could be a matter of class – of both promotion and punters. Somehow in the South all the major Showstopper Promotions events (Caister, Brighton, Knebworth) attract a type of punter with a strong sense of identity and lifestyle, who together make up “the family”. They know what makes a gig good. Somehow Skegness just didn’t have that certain cachet, know what I mean?

KURTIS BLOW: ‘The Breaks’ (Mercury BLOW 812).
Actually rather good rapper, huge in New York, is now 2bpm faster at 115bpm on UK 12in, making the heavy bass beat even less easy to mix out of Tom Browne / Queen (although Fatback’s closer now).

TINA CHARLES ‘Turn Back The Hands Of Time’ (Polydor POSP 162).
Kelly Marie soundalike, back with a zingy Biddu-penned dated Motown-type 134bpm 7in romper.

Nothing new of any great note seems to have been about, although pleasant enough are: 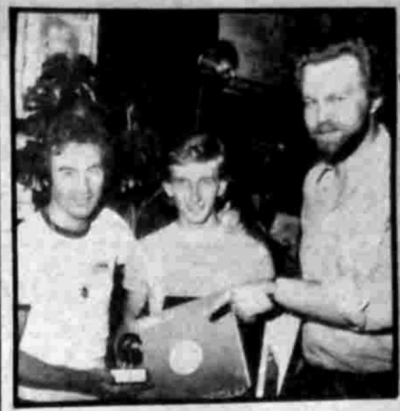 TONY HORN came up with well over a hundred titles containing the word “groove” to win Groove Records ‘Check Out The Groove’ competition prize of ten LPs, ten 12-inchers and a special trophy. A lapsed Northern Soul freak originally from Northants, 22-year-old Tony is now a Putney Council caretaker and well into jazz -funk, although as he and lovely wife Sharon have a baby they’ve not been out much lately. Here he’s seen at the Soho record shop in Greek Street with Groove’s Surface Noise star, the suntanned and somewhat flushed Chris Palmer (it was his birthdayl) and your roving reporter. Oh, Tony read about the competition in Record Mirror – (but of course).

JEANNEANE CESVETTE, alias Miss Bluenote, is often warm-up jockette and good friend to Tom Holland, and is well into the sort of reggae that has crossover appeal for white funk fans. Her hot reggae tips will be a regular feature from now on.

Others to watch for include 16 & 17 ‘Promise To Love You’ (CB), Black Uhuru ‘Sinsemilla’ (Island), Archie & Lynne ‘Rat In The Centre’ (High Note). Junior Keating ‘Long Long Time’ (Solid Gold) and Gregory Isaacs ‘Wailing Rudy’ (African Museum) sez Jeanneane – who could give Janet Street-Porter a run for her money! Some of the above may be hard to find as Jamaican pressing plants closed down during the recent hurricane and initial imports sold out fast.

Leave a Reply to Mike A Cancel reply