THE WHISPERS do indeed have a brand new album, ‘Love Is Where You Find It’, due on UK release this week . . . 12in newies due now too are George Benson ‘Never Give Up On A Good Thing’, Slave ‘Wait For Me’ / ‘Just A Touch Of Love’, Earth Wind & Fire ‘I’ve Had Enough’ / ‘Let’s Groove (Remix)’ / ‘Sparkle’, Modern Romance ‘Queen Of The Rapping Scene’ / ‘Can You Move (Everybody Salsa – US rap mix)’, Mike Post ‘Hill Street Blues’, Five Special ‘Just A Feeling’, while albums due next week are Kleeer, Chaka Khan, Sister Sledge, Shalamar . . . Al Jarreau ‘Roof Garden’ will be on single in a fortnight . . . Rush Release have serviced a mystery RCA white label 12in by an unnamed group, ‘Don’t Stop’ being a 128-129bpm chanting electronic pop pounder in the deadpan Depeche Mode style . . . I’m writing this while still holidaying in North Nottinghamshire, where import shops and disco gossip ain’t exactly on the doorstep, so sorry if there’s very little hot to report . . . Baccuus International are currently revamping London Camden Town’s old Music Machine into an “ultra hi-tech discotheque” for re-opening under a new name in a couple of months or so . . . Capital Radio’s ‘Souled Out And Roots Rockers’ programme now runs 9.30-10.30pm on Fridays . . . ‘OTT’ sorta ‘TISWAS’ for kids who stay up late, is very silly and quite likely to keep people in (or at least watching on their videos) on Saturday nights, especially if it sustains such inspired lunacy as The Greatest Show On Legs – three stark naked guys having difficulty in covering their naughty bits with balloons while dancing the cha cha cha! . . . Chris Hill, David Bowie, Shirley Bassey and Elvis Presley were all born on January 8th – mind you, my birthday’s the same day as the Queen’s! . . . Chris Hill now makes a point of mixing solidly for an hour between 11pm and midnight every Saturday at Canvey Goldmine . . . Froggy, who’s punters sing the “R-D-R-D-O” bit from ‘Caveman Boogie’ as “airy-ah-ah-soul”, defends the way he doesn’t do much mixing when at Radio One’s Kid’s disco’s by saying “With 3,000 kids in the venue there will be a thousand standing in front of the stage waiting for a giveaway or a silly and although I do mix a few records together it’s only two at a time as otherwise I’d lose contact with the crowd who basically would not understand what the hell was going on.” (he’s been brooding about that for months, has our Frog!) . . . Mark Southall of Newport’s Flashback Record Shop (where I believe his hero also works) says without doubt that Britain’s best mixing DJ is Dave Bumford who demonstrates the fact every Friday at Scruples in the Kings Head Hotel, Newport (Gwent) – Dave also prints exhaustive BPM lists and peel-off sticky BPM labels . . . I’ve been having fun with two copies of Kool keeping the ‘Get Down On It’ title line repeating ad infinitum, also synching KID over TC Curtis for ages, and taking Lamont Dozier out of Brandi Wells ‘Around’ . . . Europa International Agency has recently restructured itself and started up Bless The Funk Promotions which kicked off over Christmas presenting Froggy, George Power and others at Wood Green Avenida (over the Odeon) with a strict funk/soul but no jazz/reggae policy, this venue evidently being regular – as are the more commercially orientated Europa International’s nights for North London Colleges at Southgate Royalty on Wednesdays . . . Neil Fincham and Colin Cordrey say their funk/soul weekend policy at Edinburgh’s Uptown packs the place by 10.30pm so get there early if you want to get in . . . Lenny says it’s not all electro-funk at Edinburgh’s Nite Club (over the Playhouse Theatre), the video thang is where it’s all happening . . . Theo Loyla after seven and a half years has had to leave his residency at Bridge Country Club (near Canterbury) where his all-time top request was Stephanie Mills ‘If You Can Learn How To Cry‘ (US Tamla 7in) . . . I actually played for a party at my parents on New Year’s Eve, in preparation of which I and my father spent two days just shovelling snow out of the drive so that our guests could arrive, with the consequence that my leg muscles ended up aching in places I didn’t even know I had places! . . . London Capital Radio’s four hour uninterrupted continuously mixed New Year’s Eve ‘Ain’t Nothin’ But A House Party’ show meanwhile went out on tape after I’d put it together before heading North for Christmas, and in the compiling of it I discovered a sensational synch mix through the drum break of Altered Images ‘Happy Birthday’ into – you try it too – Chris Montez ‘Let’s Dance’! . . . Soft Cell ‘Tainted Love’ and ‘Bedsitter’ on 12in are both 145bpm and mix flawlessly, but in synching the 145bpm Human League ‘The Sound Of The Crowd’ through ‘Bedsitter’s’ central tapping bit I could not tell which record was making which noises, they were so perfect (ahh, the luxury quartz locked – fixed speed – decks!) . . . Bruce Springsteen ‘Cadillac Ranch’ synched out of Rod Stewart ‘Maggie May’ is a bit tasty too! . . . POD peculiarities this week include pop jocks finally catching up with Perry Haines, and discovering ‘Fire And Desire’ on the flip of Rick James ‘Super Freak’ at last . . . “D” Train is moving faster than British Rail’s APT, look at that record go! . . . and speaking of trains, I’ve got to get this onto a Red Star to London . . . Next week hopefully there’ll be some news that’s new, but in the meantime – make it anything you like, but MAKE SOME MONEY!

BRANDI WELLS: ‘What Goes Around Comes Around’ (WMOT WMOTL 105, via PRT).
Already established as the new Evelyn King, this Dexter Wansel-arranged powerfully lurching 113bpm 12in simple snickety strutter mixes sensationally out of ‘I’m In Love’ and just keeps right on along through some great rolling instrumental passages, while the equally strong ‘Watch Out‘ coupling is a chunkier 117bpm bass rumbled lilter with more vocal emphasis including a rap about the backing band and some superb jazzy scatting. The only two hot cuts off her import album, this is terrific value and not to be missed.

TOM BROWNE: ‘Fungi Mama / Bebopafunkadiscolypso’ (Arista GRP ARIST 12450).
One of the hottest sounds around, this crowing cockerel introed and clucking chickens accompanied madly jaunty bass burped 121-122-123-124bpm 12in driving jitterer has blasts of trumpet and happy fiesta-type chanting, mixing beautifully between “D” Train and EWF or (as discovered over Xmas) chopping sensationally out of Bros Johnson ‘Stomp’ in place of the bass break, the flip’s new 111bpm ‘Funkin’ For Jamaica’ remix being a tiny bit shorter and slightly rearranged with less vocal and different more doodling trumpet at times.

CENTRAL LINE: ‘Don’t Tell Me’ (Mercury MERX 90).
Sneakily infectious subtly powerful steadily tugging 111(intro)-114-113-114bpm 12in clomper with touches of Evelyn King in the beat and backing plus a whole lot of Eddy Grant in the vocal, the somewhat Isleys-style ‘Shake It Up‘ fast funky 129bpm B-side burbler fading in on some “go ‘head” chants.

RICHARD ‘DIMPLES’ FIELDS: ‘She’s Got Papers On Me’ (Epic EPC A1918).
Not shortened as initially feared although only on 7in (as flip to the datedly whomping 117bpm ‘I’ve Got To Learn To Say No‘) this full 6:36 long sensationally deeply soulful 20/40bpm bittersweet smoocher culminates in a dynamite abrasively nagging rap by Betty Wright as the wronged wife, and has been not only a US soul radio smash but also huge here for months in hipper sophisticated venues. One of the classics of 1981, it made his album a top Stateside seller, yet can now be bought here for the price of a single.

DARYL HALL & JOHN OATES: I Can’t Go For That (No Can Do)’ (RCA RCAT 172).
Timmy Thomas-type electronic rhythm box driven gorgeous 111bpm 12in lush harmony swayer by the USA’s currently most consistent chart-toppers, A dynamite mix out of Gayle Adams’ final break, with lots of blue eyed soul appeal.

DETROIT SPINNERS: ‘Love Connection (Raise The Window Down)’ (LP ‘Can’t Shake This Feelin’ Atlantic K 56838).
Mtume & Lucas replace Michael Zager as producers, making this funkily burbling exhuberantly chanted 113bpm backbeat smacker the group’s best out-and-out disco dancer in a while, although the rest of the set is slick soul as before, ‘You Go Your Way (I’ll Go Mine)‘ being a very nice soulfully wailed 43/86bpm gentle jogger and ‘Got To Be Love‘ a pleasant winding 106bpm swayer, while the smooth bubbling 117-118bpm ‘Knack For Me‘ and fast bounding 127bpm title track are due as the initial single in a fortnight.

PIGBAG: ‘Papa’s Got A Brand New Pigbag’ (Y 12-Y-10).
Long overdue, here at last is a much extended 12in remix of the great brassily screeching, braying and squealing, drums rattled 137-136-143-137-139-0bpm instrumental which originally seemed totally off the wall but subsequently inspired the likes of Haircut One Hundred (with whom it now mixes superbly). I hope it’s a smash this time around.

MASS APPEAL: ‘Tartan Fling’ (Red Bus RBUS 62, via PRT).
Excellent rumpity tumpity 0-133-135bpm 7in jolly medley of traditional Scottish tunes, great for parties and strong enough not to be ruined by a superfluous ‘Hooked On 45’ beat, hidden as flip of the less successful 131-132bpm ‘Stars On 39-45’ which medleys George Formby and other World War II memory jerkers. 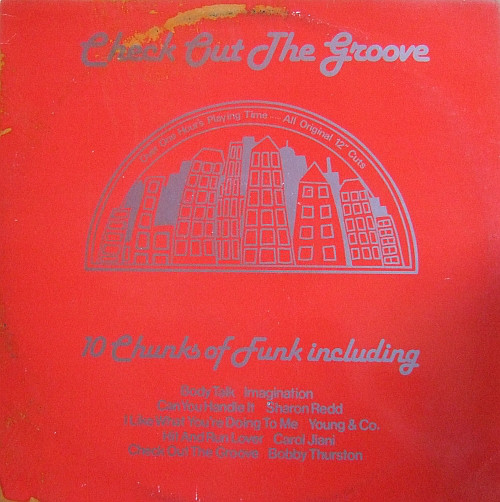 VARIOUS: ‘Check Out The Groove‘ LP (Creole CRX 6).
So badly packaged you won’t even notice it, this album nevertheless offers over an hour’s worth of the original 12in versions (obviously not cut as loud as on the singles) of the following goodies from various labels — Sharon Redd ‘Can You Handle It’, Young & Co ‘I Like What You’re Doing To Me’, Carol Jiani ‘Hit ‘N’ Run Lover’, Bobby Thurston ‘Check Out The Groove’, Imagination ‘Body Talk’, Firefly ‘Love (Is Gonna Be On Your Side)’, BT Express ‘Do It (Till You’re Satisfied)’, Scandal featuring Lee Genesis ‘I Wanna Do It’, Project ‘Love Rescue’, Watson Beasley ‘Breakaway’. Wot a lot they got!

MAVIS JOHN: ‘How Can I Love Again’ (Red Stripe SON 2222, via Sonet).
Superb old fashionedly soulful 30/61-0bpm 7in slow lament. Not to be missed by veteran deep soul fans.

SCRUNTER: ‘Woman On The Bass’ (Charlie’s Records CRD001 via Smokey Joe Productions, 0442-47915).
This 111bpm 12in calypso and the 108bpm ‘Animal‘ double A-side are hits from two Trinidad carnivals, and are both rather ethnic but useful to find available here as the first release from Smokey Joe’s new calypso catalogue.

DIRECT DRIVE: ‘Don’t Depend On Me’ (Oval DRIVE 20/20, via Rough Trade, 01-221 1100).
Linx influenced pleasant enough but terribly tentative lightweight 116-117-118-117bpm 12in jiggler by a young sounding black group, the 2-track flip’s complex comes-and-goes c125bpm ‘Time Machine‘ being nicely scatted and wailed with a Lonnie Liston Smith ‘Expansions’ feel which could get it specialist jazz-funk attention.

STACY LATTISAW: ‘Baby I Love You’ (Atlantic K 11680).
Piercingly piped burbling catchy 115bpm 7in swayer unlikely to do much now unless pop radio picks it up.

CRISTINA: ‘Disco Clone’ (Ze 12WIP 6750).
1978 vintage early Ze classic much beloved by the Rusty Egans of this world, an episodic 127-128-127bpm ramble through various styles which previously might have been dismissed as “zingy”, now on 12in as flip to a Christmas record that came too late.

No Import Reviews this week.

BUBBLING UNDER the UK Disco 90 with increased support are: