LOOSE ENDS’ commercially released ‘Nights Of Pleasure’ appears to be a single 12 inch containing Nick Martinelli’s 103bpm mix and just Dancin’ Danny D’s 104⅔bpm Dub version (not his vocal remix, once again), plus the older 120½bpm ‘Let’s Rock’ … Dancin’ Danny Poku has in fact joined Pete Edge running Cooltempo, the black music team at Virgin now being Mervyn Anthony and Justin Lubbock … UK promo copies of ‘Mr Big Stuff’ are flipped for collectors by the rapping and chanting 96⅔bpm ‘Uptown’s Kicking It‘, credited to The Uptown Crew despite the lyrics going “my name is Heavy D — and we are The Boyz”, evidently unscheduled here and (although it sounds awfully familiar) not due yet even in the US … Les Adams has concocted a 106½-111-121¼-0bm Jaki Graham ‘Megamix’ (EMI 12JAKIX 9) out of ‘Set Me Free/The Closest One/Step Right Up’, and has done a much smoother 114¾bpm lnto The Street Mix of Sharon Dee Clarke ‘Dance Your Way Out Of The Door’ (Arista ARIST 22682), other current remixes including an emptier 0-115¼-0bpm Commodores ‘Goin’ To The Bank (Credit Card Mix)‘ (Polydor POSPA 826), Phil Harding’s 130bpm Cupid Mix of Billy Ocean ‘Love Really Hurts Without You’ (Supreme Records SUPETX 110), a much chunkier 109⅔bpm New York Mix of O’chi Brown ‘Two Hearts Beating As One’ (Magnet MAGT 297R), Dancin’ Danny D’s go go-ish 100bpm Party Time mix of Octavia ‘2 The Limit’ (Cooltempo COOLR 131), and a US Warner Bros promo-only 0-108⅓bpm Victor Flores Passion Mix of Jeff Lorber ‘Facts Of Love’ (selectively mailed out by Phonogram here) … Mel & Kim’s Freehold Mix is indeed 119bpm … Cooltempo, who will be releasing it, warn that shops selling bootleg copies of the Naturals ‘Funky Rasta‘ run the risk of a visit by the BPI … Maceo & The Macks’ ancient ‘Across The Tracks‘, currently so hot its only just outside our Disco chart, is apparently being bootlegged here with the Jackson Sisters ‘I Believe In Miracles‘ as flip … Cultural Vibe has been repressed in the US with a brand new mix of ‘Dub Games’ … David Grant has left Chrysalis to sign with Polydor … Patti LaBelle duetted ‘On My Own’ at her Hammersmith shows with drummer John lngram, from the family group Ingram, and his sister Barbara Ingram was one of the three backing girls (in fact she was hardly able to walk as a lighting rig had recently fallen on her feet) … London’s WBLS returned with a strong signal, and is one of at least six black music stations now cockily running right through the week … Freddie Jackson ‘Tasty Love‘ topped US Black 45s, Cameo ‘Word Up’ and then the Communards ‘Don’t Leave Me This Way’ Club Play in Billboard … Bobby Nunn of the original Coasters died aged 61 from a heart attack in Los Angeles on November 5, just as elements of his group’s old style seem to be resurfacing in some of today’s rap records … Thursday (27) Redhill s old Busbys reopens as Millionaires, with Paul Fernandez of Purley Scarlets there every Friday and looking for PAs on 0268-727412 (office hours) … Robbie Vincent souls Didcot’s revamped Rio Friday (28), when Tony Blackburn joins Chris Britton at Tottenham Websters … Nick Lloyd of Swindon Pasha (Tues/Thurs) had his records stolen from his car, mainly seven inch singles, some rubber-stamped with his nickname “Funky Banana” or with “Pasha Nightclub”. He’s offering £100 reward, call Swindon Police on 0793-28111 … Randy Crawford’s totally tempoless ‘Almaz‘ is lovely for listening, but is it really a floor-filler? … Gap Band 8 —One Way 9, Hip Hop Electro 15 — Serious Beats 1, Hibernians 4 —Hamilton Academicals 0 … DER RUMP DUMP DUM DUM DUMP DUM. 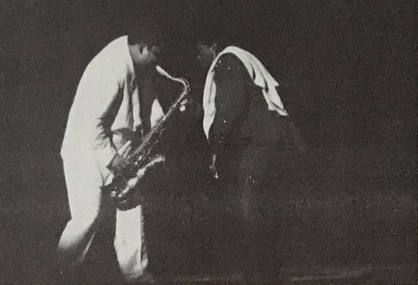 PATTI LaBELLE surprised many with one of the best live shows in a long time at Hammersmith Odeon two weekends ago. Looking stunning, yet very basic and human under the glitter, she kicked off her shoes, jumped up and down in gospel frenzy, lent her furs to people in the audience, and, cracking open a Heineken, said “I don’t like drinking out of a can … but I will”. Burp! The sudden appearance of Bobby Womack on stage almost stole the show, everyone spontaneously leaping to their feet, but in the end it was definitely Patti’s night. A blinder!

FISSION ‘King Of Swing’ (Streetwave UKHAN 4)
Retitled so that Radio One won’t have to advertise a brand of beer, and remade using different recordings of the Glenn Miller tunes to get around copyright problems, this amusing 97⅚-0bpm rap ‘n’ scratch by Howierd The Duck and DJ Szeps is indeed the already raved about and now widely available ‘Miller Light’ (in two vocal versions, plus beats and the 119bpm ‘Private Dicks’).

M.C. SHY-D ‘I’ve Gotta Be Tough’ (US Luke Skyywalker GR-104)
Bragging young Peter Jones sounds far from shy rapping his own praises to a fluidly ticking light (0-)117bpm beat with the scatting from Earth Wind & Fire’s ‘Biyo’ scratched in, the tougher 111⅔bpm ‘We Don’t Play’ flip mixing in the Motown Spinners’ guitar from ‘It’s A Shame’ (instrumental too).

AL JARREAU ‘Tell Me What I Gotta Do’ (WEA U8523TF)
This John Luongo-remixed tortuous gently jiggly 90⅚bpm swayer now it’s properly out is a twin-pack, minus its promoed dub, but with the nasally scatted tensely accelerating 97⅔-101¼bpm ‘Roof Garden’, jazzily skipping 0-113½bpm ‘Easy’ and slinky 86½bpm ‘Distracted’ oldies, all with dramatic vocalese and surging brassy accents.

KENNY G ‘Champagne’ (Arista ARIST 12686)
Pleasant doodling and tootling 105⅙bpm jazz-funk sax instrumental coupled with a sparse 103⅙bpm Kenny Beck remix of ‘What Does It Take (To Win Your Love)’ (plus its original edit) and an also emptier 0-112¾bpm Froggy remix of ‘Hi, How Ya Doin’?’.

CHUCK BROWN & THE SOUL SEARCHERS ‘Family Affair’ (US Future Records & Tapes F-0017)
Chuck’s releases are becoming as predictably frequent as once were that other Brown’s, James, this being a powerful only slightly go go-ed 90-90¾bpm revival of Sly & The Family Stone’s singalong classic, flipped by a 45-0bpm ‘The Christmas Song’ and including a “Santa says nope to dope” poster!

ROSE ROYCE ‘Fresh Cut’ LP (US Omni Records 90557-1)
Mainly for downtempo listening, with the Grover Washington-saxed whispily delicate 82¾bpm ‘Lonely Road’ getting most attention despite the Nick Martinelli-produced Chaka-ish throbbing 100bpm ‘Doesn’t Have To Be This Way’ (their US single) and Arthur Baker-produced similarly purposeful 98bpm ‘If Walls Could Talk’ having some floor potential, these producers and more creating the juddery 109¾ ‘Fighting Chance’, plaintive 94bpm ‘Magic Doll’, cantering 116⅓bpm ‘Listen Up’, Temptations-reviving 0-47½/95bpm ‘Just My Imagination’, sweet 87⅔-0bpm ‘I Found Someone’, soulful slow 28½/57bpm ‘You’re My Peace Of Mind’ and 0-36bpm ‘I Know I’m In The Mood’.

THE GAP BAND ‘Gap Band 8’ LP (US Total Experience 2700-1-T)
A lazily assembled set, sweat only being expended on the ‘Big Fun’ hit and the pop star-namechecking attractive brassily building jiggly faster seeming 87⅓-89½bpm ‘Bop B Da B Da Da (How Music Came About)’, their swaying 104½bpm ‘I Owe It To Myself’ possibly even using Prime Time’s original backing track, while others are the Stevie Wonder-ish mushily rolling repetitive 103⅙bpm ‘Don’t Take It Away’, Cameo-rambling 105bpm ‘Get Loose, Get Funky’, swaying wriggly beat-tripping 99⅚bpm ‘Keep Holding On’, slushy 57/28½bpm ‘I Can’t Live Without Your Love’ and 0-28½/57bpm ‘I’ll Always Love You’.

SALT-N-PEPA ‘Beauty And The Beat’ (US Next Plateau NP50053)
The sing-song girl rappers set up a mesmeric 94⅓bpm sultry groove over jittery lurching and scratching electro and human beats, with snatches of Little Stevie Wonder’s ‘Fingertips’ mixed in, flipped by the beefier slightly different 97⅔bpm ‘Part II At Warp Speed’ (both with instrumentals too).

STEVE PARKS ‘Movin’ In The Right Direction’ (US Dance Floor DF-1210)
Of uncertain vintage, this Curtis Mayfield-styled Smokey Robinson-accented flute-tootled nervily jittery 0-108⅓-108¾-110bpm light wriggler is what’s selling a four-tracker that also includes dated treatments of Mary Wells ‘The One Who Really Loves You’ and Drifters’ ‘Under The Boardwalk’.

LIBRA LIBRA ‘I Like It’ (US Chicago Connection Records CC8601)
Mournfully sung like a less dramatic Darryl Pandy, this effective simple nagging 120½bpm house bounder (in four mixes) has been around a few weeks and after a hi-NRG false start seems to be building into a big one.

CLAUDJA BARRY ‘Down And Counting’ (Epic 650047 6)
Cantering 121¾bpm recent US hi-NRG hit surprisingly getting some soul support here on promo despite being nowhere near “house”, although it does have some amusing Grace Jones-ish lisping put-down lines and catchy male chants (dub flip).

CALIFORNIA EXECUTIVES ‘I Don’t Know Why’ (US Williams Records WR-100)
A must for all Sixties deep soul vocal group freaks, this meandering and crescendoing 0-33⅙/66⅓bpm smoochy soul wailer will wash them with delight, coupled by a shorter version plus the similarly excellent if less stunning 56/28bpm ‘I Can’t Let You Go’ (inst too).