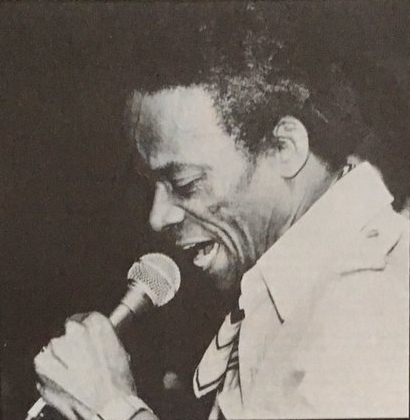 HANK BALLARD & THE MIDNIGHTERS wore marvellous last Thursday at the Hammersmith Palais, turning the clock back to the Fifties and Sixties without making any compromise to more recent musical developments. Hank, with his tidily lean face looking ever youthful, began making hits in 1954 and surely couldn’t have been much more dynamic even then, while the Midnighters vocal group stood out on their own especially singing ‘My Girl’, member Caesar Valentino doing back flips and splits during his solo Jackie Wilson tribute, and guitarist Billy Davis revived all the redundant blues licks you never thought you’d see performed again (as was everything) in such perfectly dated style. Soul, blues, gospel and rock ‘n’ roll combined, with inevitably ‘The Twist’, to make an educational blast from the past and back to the future. 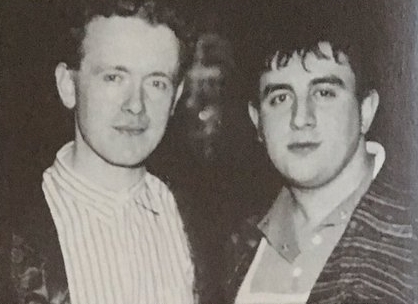 THROWDOWN ‘The Champ’ (HardBack BOSS 3)
Gilles Peterson, Paul Phillips and George Michael’s cousin Andros Giorgio have produced with musicians from Hi-Tension, Kandidate and the Team Ten Horns a note for note 111bpm remake of the reedy organ driven UK-recorded 1968 break beat classic by the Mohawks, currently numero uno on most DJs’ want lists (however, for good news, see Odds ‘n’ Bods!). Based on the chant and structure from Lowell Fulsom’s ‘Tramp’ – better known by Otis Redding & Carla Thomas – it’s still instrumental on the A-side (edit too), while the AA-side adds in Faze One and DJ Streets Ahead for a 0-100⅔bpm ‘Bust The Champ’ rap ‘n’ scratch (edit/beats too) that’s up to US standards of toughness.

HOWARD HEWETT ‘Stay’ (US Elektra 0-66827)
Shep Pettibone and the Latin Rascals have concocted five remixes of the Shalamar star’s hottest album track, a mesmeric jittering Jam & Lewis-ish swaying jogger that ends up excitingly pent up but is most immediately passionate in the 98½bpm Before Midnight Mix and slow burns in the 99bpm After Midnight Mix, with 98¼bpm Dub, 98⅓bpm Instrumental/Bonus Beats too.

NITRO DELUXE ‘The Brutal House’ (US Cutting Records CR-210)
Rapidly building over the past two weeks, this bass and jittery percussion boosted ever shifting 114½bpm instrumental reverts to the Bohannon, BT Express type of Seventies rhythm but with greater modern clarity and some squeaky doodling synth tones nagging through it all. The flip’s 114⅔bpm ‘Let’s Get Brutal’ and its 114bpm Dub are differently textured shorter treatments.

MASTER C & J ‘Face It (Club)’ (US State Street Records S.S.R. 1001)
Taking off fast, this classically simple cleanly cantering 120½bpm house – or, if you prefer, timeless disco – has a chap calmly muttering his mysterious pleas for help in a pseudo-profound narrative as the synth-washed beats keep leaping along (instrumental Dub It and keyboarded Jazzy Jack Track too).

PRINCE PHILLIP MITCHELL ‘Devastation’ LP (US Ichiban Records ICH 1004)
One look at his song titles and you’ll call him Mr Pitiful, not Prince. This guy is hurtin’ inside, and the result for us is the best truly soulful album in a long time … including Bobby Womack. Whereas Womack recorded in Memphis and still sounds predictable, the almost equally veteran but refreshingly far less familiar Mitchell recorded in Muscle Shoals with its Sixties backing musicians, producing and writing everything himself. The jogging slightly Al Green-ish 98½bpm ‘I Can’t Get Used To Sleeping By Myself’ has the most easily useable rhythm while best slowies are the 0-28⅘-57⅔bpm ‘I Taught Her Everything She Knows’ and 35-70bpm ‘She Was My Lady’, others continuing a theme being the 106bpm ‘The Show Must Go On’, 68bpm ‘You’re Gonna Come Back To Love’, 34/68-0bpm ‘This Is Our Song’, (0-)116bpm ‘In Her Own Way’, 122½bpm ‘Body Shop’. Obviously, this guy’s been left, and don’t know what to do about it – unlike Oran ‘Juice’ Jones!

BEASTIE BOYS ‘Licensed To Ill’ LP (Def Jam 450062 1)
Outraging stuck in the mud traditionalists and exciting the more open minded, these brash and self-consciously nasty boys have really made a fusion of rock ‘n’ rap, with solid depth instead of the surface rock guitar trimmings that satisfy nobody. The whole set is a blast, floor-fillers though being their 0-96⅔bpm ‘Slow Ride’ adaptation of War’s ‘Low Rider’, Led Zeppelin-ripping hip hop heavy metal 96½bpm ‘She’s Crafty’, scratching and shouting 98bpm ‘Time To Get Ill’, honking and chanting 116bpm ‘Brass Monkey’ – and don’t forget ‘Girls’!

JESSE JOHNSON ‘Crazay (Featuring Sly Stone) (Remix)’ (US A&M SP-12214)
Although a dreadful untidily jumbled overly-vocal version has already been released here, A&M have rightly superseded it by mailing DJs this vastly superior import remix, a smoothly pumping (0-)113-0bpm backbeat chugger with bursts of chanting and Sly’s old “I want to take you higher” washing through (rather than dominating) the now cleanly driving beat, sorta ‘A Love Bizarre’ meets James Brown with the rough edges knocked off (in four mixes).

DOUG E. FRESH & THE GET FRESH CREW ‘Oh, My God!’ LP (US Reality F-9649)
I had been resisting having to buy a set that revolves around a lengthily remixed ‘The Show’, and ‘All The Way To Heaven’, but had to succumb as growing numbers of DJs force it into our chart all because of the infectiously jiggling go go-ish 101⅓bpm chantalong, scratchalong, rappalong ‘Lovin’ Ev’ry Minute Of It (Cyclone Ride)’. It’s preceded by the even jauntier short 0-101⅔bpm second half of ‘Leave It Up To The Cut Professor’, while ‘Nuthin’‘ has a totally human beat boxed backing.

SALT-N-PEPA ‘Hot Cool Vicious’ LP (US Next Plateau PL1007)
Cheryl (Salt), Sandy (Pepa) and Latoya (Spinderella) are obviously girls who just like to have fun, on a good humoured rap set which includes their singles, hottest newie so far being the giggly go go-ish 0-91⅔bpm ‘My Mike Sounds Nice’, while coincidentally the 93bpm ‘Tramp’ is based on the scratched-in Otis & Carla cut that inspired ‘The Champ’. Check the chart for other relevant beats.

THE SOURCE featuring CANDI STATON ‘You Got The Love’ (Streetwave MKHAN 78)
Farley ‘Jackmaster’ Funk mixed the sparser more fluid flip’s two versions of this murkily tempoed 109⅗bpm burbler, naggingly souled with an inspirational lyric, but the only thing that really cuts through is a tinkling chime in the two A-side mixes’ chattering rhythm.

HEAVY TRAFFIC STARRING “V” ‘Jealousy (Remix)’ (US Atlantic 0-86767)
Having plumped for the better value album I much prefer its more concise version of this Brian & Eddie Holland-prod/penned girl-souled rolling lurcher, but Larry Patterson’s (0-)110⅕-0bpm remix has been serviced (along with other recent imports) by WEA to several DJs, and the flip’s sparser self-descriptive Dub A Capella is rightly building support, being reduced to just the bass, backbeat, and powerful wailing (inst/edit too). Who is “V”? She can sing.