CATHERINE BUCHANAN was the Madonna-supported actual lead singer of Jellybean’s earlier hit, ‘Sidewalk Talk‘, and it’s her operatic singing that starts off the current Jack E Makossa ‘The Opera House‘. However, tough luck on her (she is getting a British TV show devoted to her soon, which ought to compensate), all the “opera” element has been scrapped from the brand new excitingly pounding Phil Harding and Yo Yo-remixed 119¾bpm Blue Ink Mix of ‘The Opera House’ (Champion CHAMPR 12 50), now seemingly based more on the original flip’s ‘African Mix‘ and devoid of gimmicks.

Natasha Brice from Upper Norwood deservedly won last week’s competition to find ‘Miss Gullivers 1987’, and was immediately congratulated by (left to right) Nat Augustin, Patrick Boothe, Rick Clarke and Everton McCalla. Gullivers will in fact be moving to brand new Soho premises just off Regent Street in a month’s time, but right up until the night before the change will be open as usual at its legendary site of 17 years, in Mayfair’s Down Street. 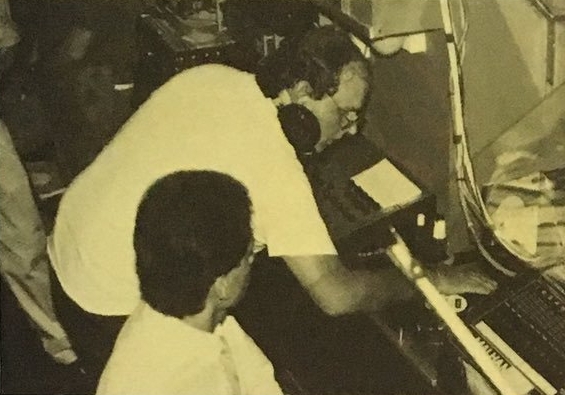 LES ADAMS went over to say goodbye to resident jocks Nic Wakefield and Jon Jules, and to thank them for playing L.A. Mix ‘Don’t Stop (Jammin)’, at Uxbridge’s Regals during the Turbo Sound/DMC party last Tuesday — but he wasn’t allowed to leave until he’d done a quick and fierce scratch mix session!

One item that caught my eye at PLASA’s Light & Sound Show ’87 was Harrison Information Technology of Cambridge’s SP12 stereo mixer, which includes two crossfades, stereo emphasising image controls and other useful functions (as it should for £781.48), including a built-in beats per minute counter (top right corner). How accurate this is, of course, remains to be seen, as I’ve yet to encounter one that’s totally satisfactory.

MICHAEL JACKSON ‘Bad (Dance Extended Mix)’ (Epic 651155 6)
Already massive on dancefloors in its LP version, his urgently jittering smacker is now in a much extended 114⅓bpm Bruce Swedien remix that dips down into a false fade three-quarters of the way through, before bursting back on the beat (dub/acappella flip).

CAMEO ‘She’s Mine’ (Club JABX 57)
Rather sombre lurching 95½bpm return to their once typical ‘She’s Strange’ style (or rather its rapping ‘Room 123’ version), with acid guitar and rasping sax, Les Adams’s new ‘Cameo Megamix’ being due as flip to a creatively marketed later pressing, this one’s flip having the old funkily jolting 108bpm ‘Flirt’ and jaggedly flying 132-0bpm ‘The Sound Table’.

EPEE MD ‘It’s My Thing’ (US Fresh Records FRE-14)
Helicopter introed Eric B & Rakim-type (0-)102bpm drily rapped jogger cutting in the title line from Marva Whitney’s ‘It’s My Thing’, her James Brown-produced (of course) 1969 answer version to the Isley Brothers’ ‘It’s Your Thing’, monotonous and routine to my ears but big in rap venues, the drawling 93¾bpm ‘You’re A Customer’ flip cutting in yet more stuff to possibly better effect (both with dubs too).

PEGGI BLU ‘Two Can Play At That Game’ (Capitol 12CL 460)
Sweet soulfully sung lightly juddering 106bpm swayer remixed and extended by Godwin Logie, fine for clubs though not necessarily a crossover song (no knowing what the commercial flip will be).

RENEE ALDRICH ‘Just Begun To Love You’ (US Jam Packed JPI-2010)
Pleasant enough if unexceptional sweetly sung 0-107⅔bpm routine rolling plodder which could have come out any time in the last eight years, but chose three weeks ago and has been building support since (dub/edit flip).

GEORGIO ‘Tina Cherry’ (US Motown 4586MG)
Jermaine Stewart-ish monotonous, but I suppose once it’s known, possibly quite mesmeric 116½bpm fluttering wriggly US hit, boosted here only by DJs recently returned from New York who became acclimatised to it there (in four mixes).

WENDY and LISA ‘Waterfall’ (Virgin VS 999-12)
The girls from Prince’s Revolution sound like Fleetwood Mac on this 119bpm unabashed pop churner but are still recognisably purple on the jerkily syncopated lurching 113bpm ‘To Trip Is To Fall‘ flip.

AGE OF CHANCE ‘Don’t Get Mad, Get Even!’ (Virgin VS 989-12)
Not Mary Wilson’s secret Hi-NRG hit of the same name although quite fast in a house-ish sort of way, this jerkily spurting 125¾-0 bounder lacks the flash of a M|A|R|R|S or Criminal Element Orchestra but starts with scratching effects, plonking piano, and thrashing drums before rocky guitars and punky chants turn it pop-wards (so the instrumental and beats flip could be useful).

THE REAL THING ‘I Can’t Help Myself (Sugar Pie Honey Bunch)’ (Jive JIVE T 147)
Unable to hit with their own self-penned new material, the hoarse Liverpudlians try a straight 124¾bpm revival of the Four Tops’ 1965 classic for the scampi in a basket nostalgia set.

LITTLE BENNY ‘Buggin’ Out’ (Bluebird BRT 37)
Dreadful leadenly paced boring untidy (0-)96bpm go-go plodder, undeserving of that normally joyful music’s name, but flipped for contrast by his two and a half year old 109¼-108⅔-109⅔-110½bpm ‘We Come To Boogie’, the music’s epitome and still its biggest UK hit.