CBS finally pull their finger out and issue an amazing Tappan Zee 12in EP on May 4, containing Wilbert Longmire ‘Black Is The Colour’, Mongo Santamaria ‘Watermelon Man’, Richard Tee ‘First Love’, Bob James ‘Touchdown’! . . . Herbie Hancock ‘Tell Everybody’ and Melba Moore are on UK 12in next week, as are Eugene Record, Lamont Dozier, Air Power and Mass Production . . . Two Man Sound has been remixed by Pete Waterman for the US but is due here again on new 9:20 12in . . . Gino Soccio previously recorded as Kebekelektrik! . . . ‘Makin’ It’ was shown on Thames TV last Wednesday afternoon and returns in a few weeks – it’s ‘Happy Days’ meets ‘Saturday Night Fever’ (Stigwood’s involved), starring Sylvester Stallone/Al Pacino (ie Tom Conti)-type David Naughton, whose RSO 12in of the theme is a US disco hit already . . . DJF (GB) officers stand for re-election (or replacement) at the AGM this Tuesday . . . North Midlands Assn of DJs hold a Forum this Wednesday (11) at Sheffield’s West End Hotel in Glossop Road at 7:30pm – contact Derek Dane on Sheffield 874280 if interested . . . Dorset/Somerset borderland jocks wanting a DJ Association could call Tony James on Dorchester 66254 . . . Chris ‘Michael’ Browne (no relation now to the Bangalore Brownie!) is running a jocking competition every Tuesday until the May 1st final at Elephant & Castle, Charlie Chaplin’s pub, with £40 first prize and various others, open only to experienced DJ’s (equipment provided) who should call Chris first on 01-340 5876 after 10:30am . . . Glenn J. Simpson is setting up a new disco promotion service for not only records but also disco equipment (representing just whom is not clear at the moment), so if interested apply with details about your DJ activities in writing to him at On Air, Penthouse Suite, Town Centre House, The Merrion Centre, Leeds 2 . . . Dartford Flicks, far from boppin’, goes Roller-Disco on Tuesday nights now, while DJ Colin Hudd hopes to have a ‘Kinks & Fetishes’ fancy dress night soon! . . . Chris Bangs also funks to Roller-Disco now at South Harrow Bogarts on Thursdays & Saturdays . . . Ilford Room At The Top is having trouble getting its appropriate licences and now closes on Sundays . . . Mick & Paul Clark of Brighton’s Papillon challenge any London funk club to a crazy football and disco ducking competition at the Papillon on Sundays! . . . Rayleigh Crocs has installed a laser lightshow . . . Niels Birk reports from Denmark that Scandinavia’s hottest disco label is, er, K-Tel – but don’t all laugh, as K-Tel’s two local disco labels Arrival and Chart release product from Can’t Stop Productions . . . Wiggins of Harry Rugby Club notoriety keeps getting his Polydor promo packages pinched (better than your bum, dear!) anyway, stop thief! . . . Phonogram’s John Waller is evidently upsetting jocks when invited to spin a few by being better than them (but then he was a DJ to begin with) . . . Is it true that Mike Allen can’t dance?

WINGS: ‘Goodnight Tonight’ (Parlophone 12Y R6023)
Best kept secret of the year so far, this 124bpm “disco” outing is also available on extended 7:25 12in with beefier beat response, more rhythm break time, and . . . the best bit by far, absolutely drool-provoking lavish packaging! Housed in a glossy LP-type sleeve, the inner sleeve is then like a blown-up version of the old ‘50s Parlophone 7in bag!

MIKE OLDFIELD: ‘Guilty’ (Virgin VS 24512)
Giorgio Moroder meets ‘Tubular Bells’ – a obvious thing to say, but true! Pressed in lovely blue vinyl with white label and photo sleeve, this 128bpm synthesizer thumper will be big with pop fans and comes in two versions, on 4:00 A-side and 6:38 flip. I actually rather like it.

BUNNY SIGLER: ‘By The Way You Dance’ (Salsoul 12SSOL 117) (BNDA debut 3/10/79)
Boy, what a goof last week! Reviewed then in good faith from a white-label promo, this now turns out to have a totally different Tom Moulton remix A-side version on the 7:05 12in, and something else on the flip! Now at 125bpm, the new treatment is only available here, and rightly is exploding already.

BRAINSTORM: ‘Lovin’ Is Really My Game’ (Miracle CM5-12) (BNDA debut 5/14/77)
Frantic 142bpm oldie from 1977 is now on tangerine coloured 7:33 eye-cued 12in and always was exciting – but surely is now far too fast? Considering that Miracle slowed down the Glass Family, they could have adjusted this too, or are they after Northern sales?

LEMON: ‘A-Freak-A’ (CBS 7219) (BNDA debut 1/6/79)
CBS will lose this unless they whip it off edited 7in and put it on full 12in, as it’s now become obvious that DJ’s and punters alike just don’t want anything on 7in. The 124bpm girlie group skipper has been rendered blandly innocuous in this radio-aimed version.

VARIOUS: ‘Three Before Eight’ (RK 1004)
Due for deletion, this maxi of Wigan Casino’s traditional three closing records by Tobi Legend, Dean Parrish and Jimmy Radcliffe is getting one last push.

MECO: ‘Main Title Theme From Superman’ (RCA XB 1073)
Boring 128bpm retread sounds like all his other film theme versions, and is said to be on 12in too. Why aren’t I getting all these 12in releases?

REVELATION: ‘Why Do You Cry?’ (Burning Sounds BS 041)
Gentle 70bpm reggae thumper with a pulsing backbeat.

THE RASSES: ‘Old Time Friends’ (UA UP 36496)
Unusual happily soulful 88bpm reggae lurcher, which I hear rumours about being on 12in too. 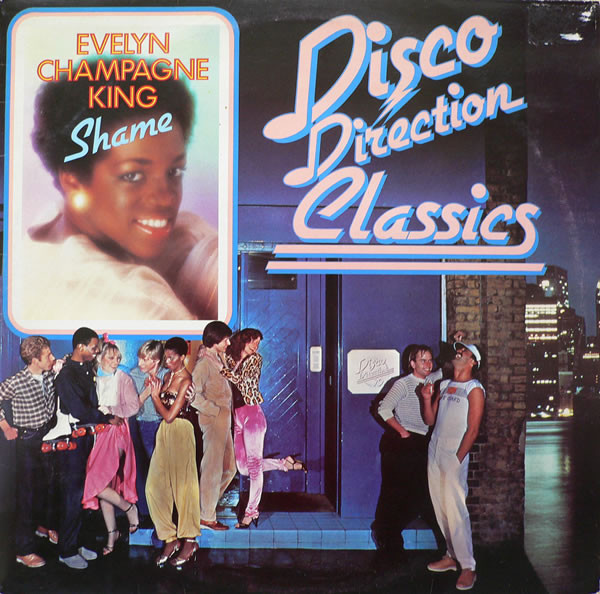 DISCO DIRECTION CLASSICS
RCA’s set of reissued 12in oldies is now available, and they are beautifully packaged in matching colour photo sleeves with each artist depicted as if on a poster above the heads of a disco queue. Full reviews and BPM’s next week, but meanwhile the titles so far are Evelyn “Champagne” King ‘Shame’ (DDC 001), Odyssey ‘Native New Yorker’ (DDC 002), Inner City Express ‘Dance And Shake Your Tambourine’ (DDC 005), Olympic Runners ‘Keep It Up’ / ‘Whatever It Takes’ (DDC 004). Missing but due is Shalamar ‘Uptown Festival’, presumably DDC 003.

MANTUS: ‘Midnight Energy’ LP (US SMI SM-601) (‘Rock It To The Top’ BNDA debut 3/31/79)
A dream come true for lovers of syndrums and powerful percussion breaks, this all revolves around just those elements, each song building into terrific breaks. The killer 9:33 ‘Rock It To The Top’ starts as a skippable 130 bpm churner before dropping into a superb long 126 bpm clonking session which makes a great mixer. The 133bpm ‘(Dance It) Freestyle Rhythm’ is already known, while the title track’s rattling break is 130 bpm.

JOE THOMAS: ‘Make Your Move’ LP (US LRC LRC-9327)
Doubtless other hot cuts will emerge from this good, jazz-funk set, but so far the big ‘un is the slightly Brass Construction-ish 6:56 title track churner, which suddenly hits an amazing ear-splittingly phased and compressed 130bpm clapping percussion break that’s great on its own, before returning to the tune with jazzily tootling flute.

RAMSEY LEWIS: ‘Aquarius / Let The Sun Shine In’ (US Columbia 23-10932)
The movie of ‘Hair’ has just opened in America, making this jazz-funk disco treatment of the show’s big tune a timely revival. Forget your prejudiced memories of it, and let Ramsey’s pretty piano trills build and build (122-126bpm) into some great Latin breaks on 10:09 12in, which needs plenty of volume to work at full power.

RAUL DE SOUZA: ‘Til Tomorrow Comes’ LP (US Capitol ST-11918)
Pizzicato string wind up into a happily jumping 126 bpm jazz-funk trombone title-track romper that twirls along for 8:04 of smoothly thumping energy. Also hot, the more convoluted 120bpm ‘Up And At It’ is a funkier burbler.

RICHARD EVANS: ‘Burning Spear’ (from LP ‘Richard Evans’, US Horizon SP-735)
Slow starting before the brassy fire takes over, this 5:33 version by the arranger who wrote it originally for the Soulful Strings in the 60’s is a subtly pushing 116bpm big band instrumental – except it’s too subdued to sound like traditional ideas of big band blowing. Jazzy and more satisfying than the other current Salsoul Orchestra version, it’s joined by a straightforwardly “disco” chix-sung mid-tempo 117bpm ‘Do-Re-Me-For-Soul’.

BRAINSTORM: ‘Hot For You’ / ‘Don’t Let Me Catch You With Your Groove Down’ (US Tabu ZS8 5514) (BNDA debut 4/7/79)
Probably less cluttered on the presumably longer 12in, this churning 4:10 7in thumper accelerates through squawking chicks, brass and rhythm breaks from 132 bpm to 139 bpm, while the simpler 127 bpm flip is brassier with an easy groove developing into an instrumental last half. Funny that their oldie should be out here this week, too.

ENCHANTMENT: ‘Journey To The Land Of Enchantment’ LP (US Roadshow BXL1-3269)
Because it’s a traditional soul-orientated set this may seem rather dated by disco standards yet it still contains two currently hot cuts (and some nice slowies) – which must show where UK DJs’ loyalties lie! Both chug along with subtle wailing gospel-styled vocal work, the 4:41 ‘Magnetic Feel’ at 110 bpm and 3:48 ‘I Wanna Boogie’ at 112 bpm.

AIR POWER: ‘Be Yourself’ (US AVI AVI 12-252-D)
Sparsely orchestrated and bland seeming chix-sung 9:10 12in chugger actually pushes along quite nicely at 129 bpm, with several eye-cued breaks, though it’s far from funky.

Franklin Sinclair, mobile and guest spots from Prestwich (061-773 2151), used to be a good “chatter” until he discovered BPM and got into mixing. “The other night I did my best little mix yet, Gene Chandler into Keith Barrow into Players Association into Gaz, and afterwards a guy came up to ask how come the last record was sung by four different people! That really made my night.” See, you too can win friends and influence people with BPM. Anyway, my own current hot BPM mix is a synchronised fade from Jacksons ‘Shake Your Body’ over the main beat of Gino Soccio ‘Dancer’, which then halfway synchs perfectly into Poussez ‘Come On And Do It’, which chops after the girls go “do it to me” a few times halfway into the girls just after the start of Bunny Sigler ‘By The Way You Dance’ (UK remix). Another goodie is Eugene Record ‘Magnitism’ instrumental part mixed into Carrie Lucas ‘Dance With You’, starting at main beat and organ. And don’t forget the dynamite rhythm bits on the new Mantus album!