ROCKERS REVENGE has been snapped up by Phonogram for rush release on London, Satril picked up Dunn & Bruce Street . . . I’ve finally invested in a quartz locked deck, so all bpm’s will now be absolutely accurate (unless marked with c for circa — meaning they were done in a shop) . . . Steve Walsh (01-724 1559) is looking for a lighting and sound engineer, to learn the business from scratch if necessary, at one of the World’s major ballrooms (I wonder which one?!) . . . M Platts now — beat this! — says: “When between DJ jobs my charts are more accurate than half those working” . . . Russ Winstanley reintroduces Northern Soul allniters to Wigan at Tiffany’s the second Friday of every month from Friday August 13 (let’s hope that’s not an omen!), with all the old Casino jocks plus the prospect of Edwin Starr live in September — £2 for members, 1am-8am, 1,200 capacity, lotsa sweat! . . . Capital Radio’s open air Jazz Festival at Knebworth last weekend, at least, had great weather for once . . . Top Of The Pops recent ‘Soul Train’-like edition had its effect — look at the top end of the pop chart . . . I stopped playing ‘Fame’ after the fifth time at a mobile gig last Saturday — the TV series’ Erica Gimpel must be bitter that it’s not her version that hit here, as most people probably think they’re buying her . . . UK pressings of the ‘KISS Mastermixes’ double album, although identified by catalogue number and sleeve logo as on Epic, actually use the Prelude label on the actual records — a long overdue British identity for the hot American disco outlet . . . Whitehaven Whitehouse’s Phil Haslehurst sent me a tape of local Cumbrian band It Bites, whose ‘Ytopio’ is a very accomplished catchy fast flowing sax-led jazz instrumental . . . Gary Crowley could make a fortune doing gigs, to judge from the likely lad’s first live Tuesday broadcast from the Camden Palace recently on Capital . . . Alan Coulthard’s Solar mix got everyone talking who’d heard it on Luxembourg last Friday at 10.10pm — like a fool I forgot to hear it as I was out drinking with Peter Young! . . . OK, Keith, so Persis Kambata is not in the new ‘Star Trek’ flick, though it’s still subtitled ‘The Wrath Of Khan’ . . . Richard Allinson just did a brill segue from Ultravox ‘All Stood Still’ into the similar Sheena Easton ‘Machinery’ — what a way to start sitting in for Nicky Horne! . . . Rush Release’s Ian Titchener marries Clare soon, and invited the world to Harringay Lazers to celebrate this Tuesday just gone . . . Nicky Sands, once disco plugger for such as CBS and UA but now an area manager for Alfred Marks, finally made Joy an honest woman and honeymooned in New York where they caught all the many doo-wop shows, both live and on radio (check 101FM Sundays 7pm-midnight, and twiddle through AM frequencies Saturday 10am-2pm to locate Bobby Jay’s show) . . . Rick Holland kindly gave me a replacement Willie Tee ‘Walking Up A One Way Street‘ so Tuesdays at Le Beat Route are cool again! . . . Rick himself jocks at Tulse Hill’s Bonne Bonne (pronounced “Bon Bonnie”) where he alternates with Tom Nelson (The Admiral), and at Twickenham’s Winning Post . . . Bristol’s Martin Starr, thanks to a mention on this page, temporarily does Dave Beeching’s Level One club in Neasden shopping centre every Mon/Thursday . . . Mayfair Gullivers lets you drink yourself legless for free up until midnight every Tuesday, provided you pay £5 admission . . . Pigbag ‘Big Bean’ on 12in is 129-131-129-131bpm . . . I have seen the likely reality of the 21st century on Earth, in a preview of the hit US movie ‘Blade Runner’, and it is not a pretty sight — but the movie and its visionary effects are stunning . . . Abba’s ‘Lay All Your Love On Me’ was only on 12in here, but did indeed come out in the States on 7in . . . Ronnie Scott’s got a chef in his club who’s half black and half Japanese, so every December he attacks Pearl Bailey! . . . KEEP IT TIGHT!

They kick off by supporting Light Of The World at Hammersmith Odeon on July 31 followed by gigs in their own right at: Hitchin Regal August 5, Manchester Unity 7, Cardiff Top Rank September 3, Brighton Top Rank 10, London Venue 11.

More dates will be confirmed later.

KOOL & THE GANG: ‘Big Fun’ (De-Lite DEX 7).
‘Celebration’ meets ‘Get Down On It’ halfway at 116bpm — which really says it all — the 12in being flipped by the extended 110-111bpm remix of ‘Get Down On It’ previously only available for Walkman wearers on the ‘Dura-Dance’ cassette compilation.

PATRICK BOOTHE: ‘Never Knew Love Like This Before’ (Streetwave STR A13-2596).
The Richard Jones-produced track is so truly awesome this time that the sinister bass figure is likely to do damage to your speakers as this purposefully pushing 109bpm 12in jitterer unwinds, Earth Wind & Fire’s overworked Phoenix Horns yet again braying behind pent up Patrick (instrumental flip) — but, vital to Streetwave though this release is, I still have the nagging doubt that not enough of a song develops, despite the last minute insertion at my suggestion of more variety towards the end. However, its immediate impact is strong (especially on radio), and it should do much better than that last disaster.

KENI BURKE: ‘Risin’ To The Top’ (RCA RCAT 252).
Around for ages on album, this beautifully soulful classy cool unhurried (0 -)94bpm 12in jogger has been flipped for value by his set’s next hottest cut, the similarly cool drifting and rolling 111-112½bpm ‘Hang Tight‘. On both, it’s the man’s vocal quality that counts.

DONNA SUMMER: ‘Love Is In Control (Finger On The Trigger)’ (Warner Bros K 79302T).
Properly remixed, extended and decidedly strung out 132bpm 12in version of her Quincy Jones-produced current pop hit, with instrumental flip, not that this lengthening adds any punch to the more concise 7in.

LOUIS CLARK conducting THE ROYAL PHILHARMONIC ORCHESTRA: ‘If You Knew Sousa (And Friends)’ (RCA RCAT 256).
Terrific ultra jolly marching and galloping party fun, the 12in seguing both 128bpm parts in fact in reverse order to the 7in sides, the B-side Part 1 (if you get me) going nicely before Mario Lanza’s ‘Valencia’ (US RCA). Cor!

SHARON REDD: ‘Beat The Street’ (LP ‘Redd Hot’ US Prelude PRL 14106).
Sinnamon’s producer Eric Matthew concentrates too much on creating a hard dry rhythm texture which may be modish but lacks instant happy appeal, although this jittery burbling 117½bpm smacker pinches that “D” Train intro and hence synchs superbly out of Rockers Revenge’s middle bit (Bobby “O” is then great out of it — see later), ‘You’re The One‘ smacks starkly along at 110½bpm with electronic precision but little joy, ‘Never Give You Up‘ sways squidgily at 113bpm, ‘Send Your Love‘ is a purposefully rolling 101bpm chugger, and ‘In The Name Of Love‘ a lush 127bpm rhythm ballad. Not her best, but not bad.

CONWAY & TEMPLE: ‘Love Lights (You Can Lay Your Head On My Shoulder)’ (US Old Town OTXL-1984).
Craftily compulsive well constructed chick ‘n’ chap duetted 110bpm 12in soulful swayer mixes perfectly out of Odyssey (in fact it was this rather than Odyssey which got my floor started on Friday!), the pleasant groove switching into some rap bits before the end. Nice to see the vintage label back, now based in suburban Woodbury rather than on Broadway in New York.

RAFAEL CAMERON: ‘Desires’ (US Salsoul SG 373).
Randy Muller-prod/penned moderately tuneful if loosely strung Stevie Wonder-ishly growled steadily accelerating 113-117bpm 12in swayer, more a mood than a song and very obviously in the Odyssey bag, ends up working into an impassioned sweat and is really rather good despite his new album in general being rather bad.

DAVID McPHERSON: ‘You Can’t Stop!’ (US SAM S-12349).
Shep Pettibone-mixed huskily sung swaying 115bpm 12in jitterer with slinky backing chix while the rhythm and intensity beef up under the smooth veneer until it reaches a rumbling, tapping and scrubbing break. The 2-track flip featuring (of course) an electronically freaky ‘Fierce Instrumental‘ as well as a ‘Traditional Instrumental’. It’s deceptive — my floor got surprisingly frisky while it was on.

BOBBY “O”: ‘Still Hott 4 U’ (US “O” Records OR 718).
Although there’s an ‘I’m So Hot For You‘ vocal A-side, it’s this dynamite rattling and smacking 122bpm 12in instrumental rhythm side that’ll grab most jocks — wild and “fierce” with flutter echo and all the trendy trimmings. It vari-synchs sensationally (and I mean, sensationally!) through Sharon Redd’s ‘Beat The Street’.

MIGHTY FIRE: ‘Just A Little Bit’ (LP ‘Mighty Fire’ US Elektra E1-60104).
Fairly mundane funk set serviced to DJs by Fred Dove (hence chart mentions), redeemed by this one gently twiddling attractive 98bpm jogger, much better than the dull funky 122bpm ‘Heavy Rotation‘, 115bpm ‘Start It Up‘, 112bpm ‘Sixth Street‘ — the group also have a new 12in, not on LP, ‘Take It To The Hoop — L.A. Lakers‘ (US Elektra 0-69900), a sparse c.126bpm funk smacker about basketball and their local team heroes.

HOWARD JOHNSON: ‘Say You Wanna’ (LP ‘Keepin’ Love New’ US A&M SP-4895).
I still think the ex-Niteflyte lead singer is too carefully controlled and quite frankly rather dull on this very samey set from Evelyn King’s production team, the only advantage in this 113-112-113-112bpm track being that it not surprisingly mixes perfectly with ‘So Fine’, ‘I’m In Love’, etc.

PATRICK COWLEY featuring SYLVESTER: ‘Do Ya Wanna Funk’ (US Megatone MT 102).
Sylvester is in ‘You Make Me Feel (Mighty Real)’ voice on this very similar 130bpm 12in synth and drumkit backed pounder, well done but now dated for all except Cowley’s camp followers.

DAVID SANBORN: ‘Rush Hour’ (LP ‘As We Speak’ US Warner Bros 1-23650).
The jazz saxist’s specialist convoluted c.116-112-116bpm instrumental burbler and moodier c.105bpm ‘Port Of Call‘ are naturally being charted by some jocks because, well, it’s David Sanborn. Real dance appeal is low even if the music’s OK.

PIECES OF A DREAM: ‘We Are One’ LP (US Elektra 60142).
Down tempo jazz apart from the last cut each side, The chix-sung jittery 109bpm ‘Yo Frat’ half-stepper and ‘Mt. Airy Groove‘, a slow 107bpm instrumental smacker starting with the currently trendy back-tracking beat effect.

GERALD MALLORY: ‘Lay It Down On Me’ (US Prelude PRL D 627).
Smoothly crooned intensifying c.125bpm 12in jitteringly tugging chugger, breaking only in the North-West (where they tend to chart anything that’s out).

BRENDA JONES: ‘My Heart’s Not In It’ (US Wave DL 1215).
CM Lord co-prod/penned soulfully wailed emphatic c.113bpm 12in lurching thudder with lots of presence and bass synth.

BT (BRENDA TAYLOR): ‘You Can’t Have Your Cake & Eat It Too’ (US After Hour Records AHR 4100).
Purposeful c.112bpm 12in chunderer with insistent chaps behind wailing BT.

GRANDMASTER FLASH & THE FURIOUS FIVE: ‘The Message’ (US Sugarhill SH-584).
Rather good interestingly natural to begin with slow thudding c.110bpm 12in rap about hard times.

RICH LITTLE: ‘President’s Rap’ (US Boardwalk NB9-99901).
Ronald & Nancy Reagan impersonations (with applause) over the c.100bpm 12in ‘Genius Of Love’ riff, not very funny unless you’re in tune and in America. 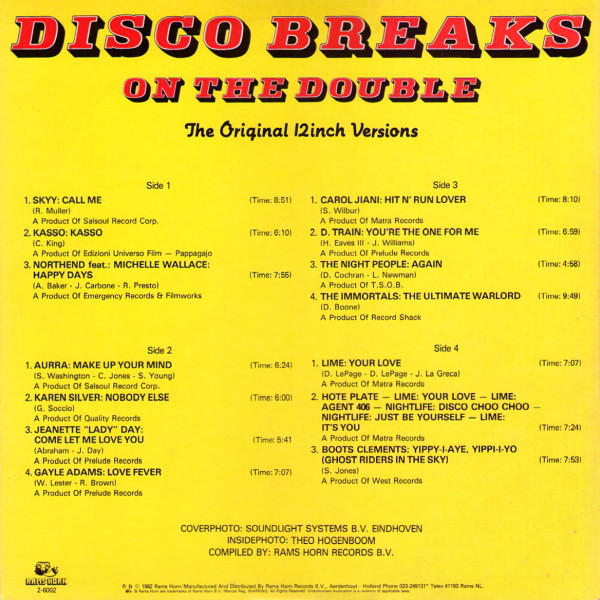 VARIOUS: ‘Disco Breaks On The Double‘ LP (Dutch Rams Horn 2-6002).
Double album of recent (but not new) full length 12in material, half reasonable / half gay, all mixed and including yet another ‘You’re The One For Me’ phasing out of ‘Hit ‘N’ Run Lover’.

DEE DEE WOP: ‘Get Off My Cloud’ (Canadian Rio RIO 39).
Exaggeratedly English accented chick talks through the Stones oldie over a thudding c.112bpm 12in beat.

BARRY WHITE: ‘Change’ (US Unlimited Gold 4Z9-03051).
A striking start then dips disastrously before Barry hollers a c.131bpm 12in smacker about a change being needed. Indeed.

BUBBLING UNDER the UK Disco 90 with increased support are:

So many records have been hitting the Breakers purely on the strength of play in gay discos that it seems timely to list the specifically gay club hits on their own. Now that there’s more room, as promised, this could be a regular feature provided we get enough regular chart returns.