DAYTON ‘The Sound Of Music’ has been test promo-ed as a really useful ‘US Pre-Release X-Tended Re-Mix‘ which straightens it out into a steady 114-115-114-115(break)-114-115bpm, replacing the jazzy but tricky intro with vocoder and beat . . . Galaxy featuring Phil Fearon ‘What Do I Do‘ is another frothy 113½bpm shuffling pop kicker, due commercially next week . . . Luther Vandross ‘I Wanted Your Love‘ is now on US 12in (Epic 49-04969), as is a remix of Gladys Knight & The Pips ‘When You’re Far Away‘ (US Columbia 44-04965, 111bpm) . . . Adrian Sykes’ new co-plugger at Island, Julian Palmer is starting an electro/alternative DJ mailing list — jocks honestly into it should send him their details at Island Records, 22 St Peters Square, London W6 9NW . . . Art Of Noise ‘Beat Box‘ now tops US Dance/Disco, Cheryl Lynn ‘Encore‘ is top US Black single — c’mon Britain, get on the case! . . . Break Machine’s video (like all the others) is good enough, but live on TVam with no clever editing they were brilliant — and were even more marvellous, according to Gary Van Praagh, at Soho Bananas (where they return on Tuesday 28) . . . Capital Radio’s Mister Ouch! Al Matthews acted the jitterbugging black GI victim of the dance hall punch-up in ‘Yanks’ . . . Burundi Black’s original unadorned African chant sounded highly incongruous throbbing out of the Amazonian jungle during ‘Fitzcarraldo’ on telly — couldn’t painstaking director Werner Herzog have found something more authentic, or at least less well known? . . . Radio Invicta’s nightly 103.6FM broadcasts may be from SE London but cover the metropolis and are good reason for turning the radio on at night again — though why do Mastermind leave their mixes until so late on Wednesday (actually Thursday morning)? . . . Giorgos Pappas calls his station Greek Cypriot Broadcasting For London, according to my local kebab take-away! . . . Gary Allen tonight (Thursday 23) starts a fetish club Decadance II at Liverpool’s Concert Street, where there’ll be a human cage and (he hopes) lots of kinky dressers . . . Daryl Stafford (well known printing error) insists The Cabaret Club is Bournemouth’s only exclusively gay club — so there! . . . Paul Parker appears exclusively at Haringey Bolts this Friday (24), when Froggy, Chris Dinnis, John C and Central Line “live” funk Yeovil Olivers, Roger Dynamite has another ’60s special at Gt Yarmouth Tiffany’s, and Robbie Vincent joins Colin Hudd at Dartford Flicks . . . WE FUNK ALL NIGHT!

MICHAEL JACKSON has blazed back into the US Top 5 now that ‘Thriller’ is out there on 12in (US Epic 49-04961), with something that we (and mixing DJs in particular) really missed — an instrumental flip! However, one step behind, well be getting it on the B-side of ‘P.Y.T.’ whenever that comes out here. The same 118bpm backing track, it retains some chorus singing and Vincent Price, and is worth buying on import for the cover pic alone.

JULIA AND COMPANY: ‘Breakin’ Down (Sugar Samba)’ (London LONX 46)
Steeped in gospel (dad was an original Dixie Hummingbird), Julia McGirt took over Jennifer Holliday’s role in ‘Dreamgirls’ and now wails as well as you’d expect over a fantastically infectious frisky jazz backing that’s already burning up the airwaves here — the UK 12in somehow runs slower at 115-114½bpm, with a new Pedro Edit for radio and same Club Insert.

DUCES WILD: ‘Gimmick’ (US Next Plateau NP 50018)
The week’s hottest hip hop, great with Pumpkin/Art Of Noise, this 107bpm 12in judderer has terrific freaky FX as it progresses but really rates for its rapping lyrics (inst/bonus beats flip). Presumably they can’t spell “deuce”, or are they Mussolini fans?
[Editor’s Note: only the Instrumental/Bonus Beats is available online.]

SHANNON: ‘Give Me Tonight’ (US Emergency EMDS 6542)
Useful as ‘Let The Music Play — Part 2’ though not so strong a song, the 118½bpm 12in dub version is again best for hip hoppers and bumps up an electrical storm that mixers will love (this time both sides are the same BPM!) 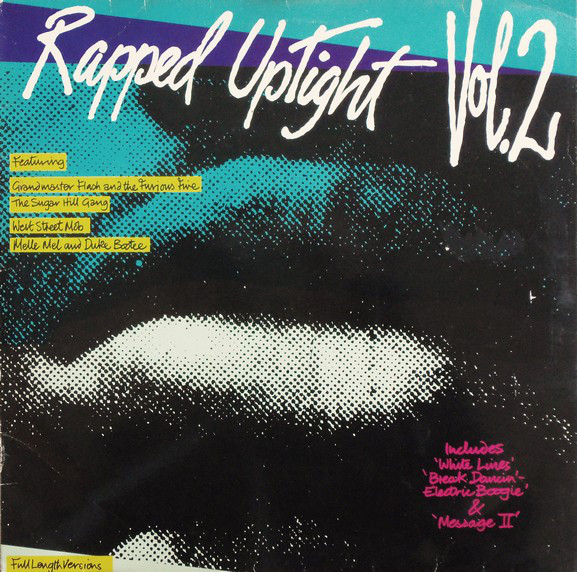 STEVE ARRINGTON’S HALL OF FAME: ‘Hump To The Bump’ (Atlantic A 6963T)
Less impressive than others on his LP, an urgently bashing Narada Michael Walden-ish fluid 121-122-123bpm smacker climaxing in tinkling steel drums, on 3-track 12in with the edit alone on one side pushing the long version next to the older 109bpm ‘Nobody Can Be You‘.

ALISHA: ‘All Night Passion’ (US Vanguard SPV 72)
Shannon inspired 117½bpm 12in blend of flurrying electro beats and passionless “disco” squawking, not as good as Shannon or Xena but obviously useful for mixers (differently textured dub/bonus beats).

ALEX & THE CITY CREW: ‘Say What, Say Who’ (Dutch Megadisc 128318)
Say which exact Continental city are the crew from? Competent enough to be from the South Bronx, if nothing different, the youngsters’ 115bpm 12in hip hop rapper is flipped by 14 short snippets of various effects “specially cut and ready to scratch”.

WAS (NOT WAS): ‘(Return To The Valley Of) Out Come The Freaks’ (Ze/ Geffen TA 4178)
Tricky to explain, the 12in A-side remix of their current LP’s remake of an old track is a marathon 100¼bpm Smokey Robinson-sings ‘Spanish Harlem’ to a ‘Sexual Healing’ beat type of idea, the flip’s ‘Predominantly Funk Version‘ being a meandering mix of the very different 118bpm original (I think).

MILLIE JACKSON: ‘I Feel Like Walking In The Rain’ (Sire W 9348)
Thunder introed pleasant peaceful 43/86bpm 7in slowie, serviced to DJs by WEA.

MAVIS STAPLES: ‘Love Gone Bad’ (US PhonoRecords CP-1051)
Although the Staples are now on Larc, Mavis solos independently with a sultry slow soulful c.98bpm 7in swayer, bronchially emoted as ever.

ROZ RYAN: ‘Boy Where Have You Been’ (US Mirage 0-96969)
Butch Ingram-produced old fashioned c.121bpm 12in hop, skip and shuffle with bumbling bass and twiddles behind the strident chick (inst ‘club mix’/slow flip).

LAID BACK: ‘White Horse’ (Creole CRT 63)
With male vocals and overall feel harking back to Eurodisco’s 1977 Boney M era, this sparsely simple looping 12in loper was once flip to the Continental smash ‘Sunshine Reggae’ but now in its own right has topped the US Dance chart, hence its reissue here in 123bpm US Megamix and blander 123½bpm UK Remix.

BUBBLING UNDER the Disco 85 are:

and under the Boys Town-Hi-NRG 30 are:

Beats Per Minute for last week’s Top 75 entries on 7in (endings denoted by f/r/c for fade/resonant/cold):

Apart from a straight segue out of AB’s and the Newcleus chop, all are vari-synched running mixes, with from Shannon onwards using very short segments only.