BOMB THE BASS are in fact from London, being DJ Tim Simenon from the Wag and studio engineer Pascal Gabriel, a remix of ‘Beat Dis’ already being due … Adrenalin MOD’s ‘Bouncy House’ for the time being is still released on Warrior Records, although now MCA Records (whose employee Maurice Bird is part of the group) are trying to tie up the rights, instead of the previously mentioned Uptown Records — in point of fact, my review really stirred things up! … Derek B’s now white-labelled jauntily jiggling 0-97bpm ‘Goodgroove’ this time trendily uses the Jackson 5’s ‘ABC’ rhythm, and is due commercially in two weeks … Matt Black, having fun playing with his new C-Lab Creator computer sequencer from Germany, is working with Jonathan More on a couple of acid house tunes while, out early March, their megamix of JB beats will launch a James Brown remix series on Urban, and — worth other mixers noting — their ‘Theft Appella‘ seven inch B-side to the new Coldcut ‘Doctorin’ The House’ just contains all the samples they used, on their own without music! … Essex DJ Mark Ryder (photographed two issues ago) is scratching on the upcoming ‘Get Busy‘ by MDEmm … Barry White ‘For Your Love (I’ll Do Most Anything)’ is due in a beefed up Harris & Jolley remix already, with added Mike Stevens sax … Detroit Transmat label owner Derek May’s 124bpm The Mayhem Rhythm Mix of Two Men A Drumstick And A Toothpick (London LONXR 141) is speedily snickety, while there are back-to-back 109⅓bpm Women & Children First Remix and Remixed Vocal Versions of Gladys Knight And The Pips ‘Love Overboard’ (MCA Records MCAX 1223) … Meli’sa Morgan ‘Good Love’ is due as a US remix, while Sherrick’s next single will be his reading of the Originals’ ‘Baby I’m For Real’ … Quincy Jones is apparently remaking New Order’s ‘Blue Monday’! … Larry James, drumming leader of Fat Larry’s Band, has died aged 38 in his hometown, Philadelphia … Joyce Sims is mooted as the live star at the Easter Prestatyn weekender … Morgan Khan plans not only a London-held three day UK Fresh 88 hip hop concert but also a similarly live all-star house music event in Birmingham, in June – in addition, Morgan, obviously thinking anything Germany’s Brian Carter can do he can do better, is planning a 15 LP boxed set of house music past and present, ‘The Westside House Music Box Set’ … Serious Records’ sister label Needle Records has two hot (if somewhat duplicating) compilation LPs due, ‘Mad On House‘ MADD 1) with current jacks by Bam-Bam, Adonis, Jack Factory, Fallout, Mr Lee, House Master Baldwin, and ‘Dance Mania 2‘ (DAMA 2) with Bam-Bam, Adonis, Beatmasters/Cookie Crew, 2 Bad 2 Mention, MSQ II, Spoonie Gee, Cash Money, Jellybean ‘Jingo’ … Mark Kamins’ Arabic records used on ‘Mohamed’s House’ (see review) include in particular a late Sixties ‘Greatest Hits’ album by the now dead Egyptian female singer Sabba … Colin Hudd returns to Gravesend, opening Steps (formerly the Soul Bowl) this Saturday (6), and is looking on 0474-328745 for a female DJ, to train if necessary … Soho’s Gullivers in Ganton Street, attracting a classy soul crowd, restart their old Wednesday party night under the new name ‘Wednesday Live’ next week … Nicky Holloway has already launched an Amnesia night for people with a sense of humour on Thursdays at Mayfair’s Legends … Nigel Wilton, Richard James and Rick Robinson funk ‘Planet Rok’ Thursdays at Deptford’s Champs … Rob Day (with 25 years’ worth of underground funk) and Bob Jones (with jazz and soul likewise), plus guest scratching by CJ Mackintosh, are every Friday at Flim-Flam in its new home, London Bridge’s Royal Oak in Tooley Street (no longer the Special Branch) … Glen Gunner funk/house/raps The Camden Slammer every Saturday at Camden Town’s Electric Ballroom … LWR’s Sunday breakfast man, Lewis Dene reckons Terry Billy’s similarity to Joyce Sims could be because of her Mantronik connection, as female vocalist on 1986’s Hanson & Davis ‘I’ll Take You On‘ … Sabrina’s video for ‘Boys’ is a real eye-popper — a big girl, she keeps bouncing out of her bikini top! … PUMP THAT BASS! 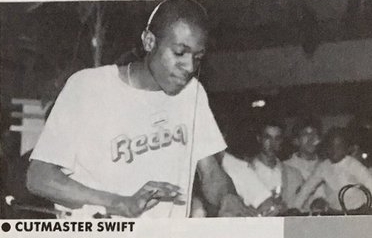 The 1988 Technics UK DJ Mixing Championships’ heats came to an end last week, with only the three regional semi-finals to go before the grand final on February 16. At Nottingham’s prettily colour co-ordinated Ritzy (where for some strange reason the audience attendance was the lowest of any heat, crowds hanging from the rafters everywhere else), the mixing standard was very high, London’s Cut Master Swift coming first in brilliantly original but jerkily inconsistent style, his flashes of genius outweighing the messy patches. His mixes are often featured on Capital Radio by Tim Westwood, but live he pulls such stunts as using both hands in rapid turn to scratch the same record, and pushing the mixer switches with his nose! 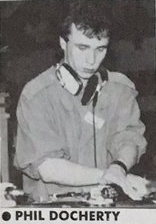 Equal second with exactly the same marks (so both qualify for the semi-finals) were Phil Docherty from Birmingham’s Stocks, who proved by going on first that this is not necessarily a jinxed position to draw in the evening’s running order, and London’s amazingly calm and collected 14-year-old Scratch Professor (see caption). In Northern Ireland, at Portrush’s Traks (packed by enthusiastic dancers), the standard was not so high, with no scratching, but Rob Nelson from Bangor’s JJ’s came a semi-finals qualifying first mixing perfectly synchronised beats, while equal second were Billy Greer from Bangor’s Matinee and Ken Burrell from Belfast’s Soul City, with Strabane’s Ian Robb third. 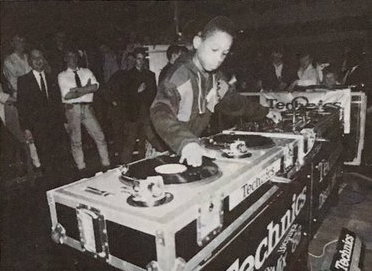 Scratch Professor, 14 years old but looking younger, came equal second at the Nottingham mixing heat purely on his ability, not because of his age. Mixing for four years now, after being inspired by seeing a DJ at an open air party in a park, the young Prof from Paddington has already won a scratching competition on BBC Radio London, just over a year ago, and can only get even better as the years go by. 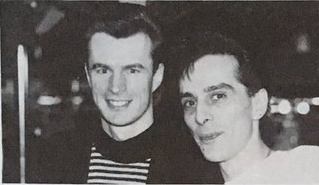 PAUL DAKEYNE (left), one of the Disco Mix Club’s star mega- and re-mixers, has joined Nic Wakefield behind the decks every Monday at Uxbridge Regals.

LL COOL J ‘Jack The Ripper’ (Def Jam LLCJ T2)
Wild and noisy, tongue lashing Kool Moe Dee and others who said he was going soft, this angrily jittering 94⅔bpm judderer in the frenetic Public Enemy style started selling on import seven inch but is now 12 inched here, for some reason though as flip to the unfashionably fast and sparse 0-135¾bpm ‘Going Back To Cali‘ (from ‘Less Than Zero’), together with his old 89bpm ‘I Can’t Live Without My Radio’. The dope!

SHEIK FAWAZ ‘Mohamed’s House’ (US Pow Wow Art International PW 431)
Mark Kamins has for long used Arabic records to add atmosphere at his illegal New York club Harem, and now incorporates them into the Live At The Harem, Islamic Fundamental Mix, and totally foreign Fawaz’s Groove mixes of this infectiously leaping piano-jangled 124¾-0bpm house canterer. If these don’t grab you, the straightforwardly instrumental Salaam Aleikum probably will. Check this out, y’all.

TONGUE ‘N’ CHEEK ‘Nobody Can Love Me’ (Criminal BUST 6, via Jet Star)
Girl led tightly jittering bubbly simple 106⅚bpm British soul weaver something like a livelier Loose Ends (edit/dub flip), white labelled ages ago to what I took to be zilch response whereas it hadn’t necessarily reached anyone then — now though it’s suddenly exploded, not only in London but Manchester too.

JOHNNY HAMMOND ‘Shifting Gears’ (BGP Records BGPT 001, via Ace Records)
The label name stands for Beat Goes Public, as well as for Baz Fe Jazz and Gilles Peterson (its owners), this flute tootled and electric keyboard nagged lightly jiggling 107-109-111-110-111-112bpm Blackbyrds-ish jazz-funk chant classic from 1975 being likely to shift gear fast in 12 inch form for the first time ever as its inevitably now a rare groove.

RACHEL ‘Love Emergency’ (US Omni/Atlantic 0-86620)
Presumably by Screamin’ Rachel, if anyone (certainly not Cousin Rachel), this soulfully warbled atmospheric swirling and tumbling 118½-0bpm story song from Chicago is much better produced (by the Byrons Stingily & Burke) than most mere “house” and has already hit our Hi-NRG chart (radio/dub flip), mixer Freddy Bastone supplying even some transformer scratch edits.

PIERRE’S PFANTASY CLUB ‘G.T.B. Got The Bug’ (US Trax Records TX157)
Frantically bounding 130½bpm acid house moaner (with still vocal 130¾bpm B-side Dub and Instrumental) by one of the increasingly fashionable DJ Pierre’s various outlets, whose earlier even more acidic 126bpm ‘Fantasy Girl‘ (US SRO 750487) remains one of the rarest and most sought after house imports, as only a few hundred were ever pressed for local Chicago distribution.

FUNK MASTERS ‘Shake Your Body Down’ (Master-Funk TWD 1955, via Jet Star)
Youthful bubbly 109¼-109⅔bpm sparse jiggler with a James Brown-ish beat in ‘Get On The Good Foot’ style (in four versions), rather appealing and worth checking.

VANESSA FRANKLIN and Midnight Energy ‘My Mind’ (CityBeat CBE 1220)
Good straight ahead huskily wailed 117bpm bass synth burbled leaping canterer that isn’t influenced by house or rap in any way (in three mixes, plus the crawling 33/66bpm ‘Never Give Up’).

This, the year’s first Hi-NRG roundup may look a bit out of date now, but that can’t be helped. Incidentally, if anyone grunts “Huh, that isn’t a Hi-NRG record”, I can assure you that everything mentioned here has shown up in Hi-NRG charts that we receive. Some are in the pop chart too!

KYLIE MINOGUE ‘I Should Be So Lucky’ (PWL Records PWLT 8), typically catchy shrill 115½bpm rinky tinky canterer from Stock Aitken Waterman’s Bananarama reject pile, by the fashionably Australian TV actress who, as by now everyone must be sick of hearing, plays Charlene in ‘Neighbours’;

ELISA FIORILLO ‘How Can I Forget You (Dance Mix)’ (Chrysalis ELISAX 1), strainingly small-voiced rhythmically muddled (Motown meets ‘Graceland’?) 0-137½-0bpm disappointing wriggly galloper, nothing to do with Jellybean this time.