Streets Ahead and Norman Cook will be following Coldcut’s ‘Payback Mix’ with a James Brown mix of their own… Rose Royce trendily much revived ‘Car Wash’ is being reissued in a new, slightly augmented, re-edit… Germany based Brian Carter’s latest box set is, unbelievably, a five LP/bonus 12 inch, 41 track compilation of the ultra-rude Blowfly ‘X-Rated’ (BCM Records BC 70-20 69-49, also available as a CD three-pack, BC 50-20 69-42), with a T-shirt included too, the point about the “Blowfly” alter ego of soul singer Clarence Reid being that he puts totally obscene new lyrics to well known hits!… Robbie Vincent’s 7.30-10pm soul show on Radio 1 this Saturday (April 16) comes live from New York City, with James Brown, Randy Muller, Timmy Regisford and other superstar guests promised!… BBC2-TV’s music investigating ‘Behind The Beat’ series, starting later this month, filmed some strangely chosen bits of the Prestatyn weekender, just on the opening night… Nitro Deluxe’s name was printed in the Prestatyn programme as ‘Intro Deluxe’, which actually sounds quite good, doesn’t it?… Jimmy Castor’s unexpected appearance at Prestatyn was a big thrill for me — I was able to meet him at last, and tell him that 21 years ago (as a fan of his first ‘Hey Leroy‘ hit) I had actually rung his door bell in the Bronx, but he was out!… Cutmaster Swift and DJ Pogo (both of Technics mixing fame) made sure they were standing dead centre of the stage front to watch the Cold Chillin’ acts at Prestatyn… Steve Walsh, a first time visitor to any LiveWire weekender, was well impressed during his brief Saturday night stay, but evidently couldn’t take the pace and passed out cold in a chair, this year’s prime “zonked on house” victim!… Steve, incidentally, turns out to be the producer of Julian Jonah, and behind the UK release of Cappella… I must admit to not originally being bowled over by LA Mix’s upcoming samples-crammed 117⅓-0bpm ‘Check This Out‘ (despite being sampled myself on the flip!), but it really was one of the few newies that cut through the crowd at Prestatyn, thanks in large part to its Serious Intention ‘You Don’t Know’-derived hookline… Peterborough’s jammin’ Steve Jason has started a Friday 6.35-10pm dance music show on Hereward Radio 102.7fm, reflecting rm’s various club charts… Tim Westwood heads up the weekly Sunday 3-8pm Illin for under-18s at Brixton’s Fridge… Motown’s upcoming new Hits Of Gold seven inch back-to-back reissue series will include the Jackson 5 ‘ABC’/’The love You Save’, and a useful coupling of the vintage Contours ‘Do You Love Me’ (one of the all-time party stormers) with Barrett Strong ‘Money’ (the hit that kicked off Motown)… TV’s ‘Falcon Crest’ last week featured ‘Twist And Shout’ during a party scene, using an ancient LP version by the Miracles!… Mahesh Bajaj, amidst making staff changes at Serious Records (could future remixes be by Single Trouble?), had all his business files stolen from his car while parked outside the Wag Club — so bear with him if there’s a hiccup in communications… Gregg Diamond & Bionic Boogie’s ‘Fess Up To The Boogie’ B-side isn’t quite as fast as printed, only 117bpm!… Capital Radio’s chanting Mick Brown made his UK Top 100 debut as part of the Monty MCs ‘Holiday Rap (With A Capital C)’… Kim Wilde is masquerading on a current clubs-mailed promo as “Mick” (another whistle blown!)… Stock Aitken Waterman won a staggering 11 Ivor Novello Awards at last week’s luncheon… Dance Aid launches its 1988 charity appeal in a businesslike way with a gala luncheon of its own on May 26 (Thursday) at London’s Metropole Hotel, with guest speakers from the disco music industry (£45 ticket info on 01-607 8311)… World Class Wreckin Cru ‘Turn Off The Lights‘, here the B-side to Sargent Tucker, is the first US Hot 100 hit ever to chart in Billboard as only a 12 inch, with no seven inch available… Salt-n-Pepa ‘Push It’ has won a gold disc in the US, the first single to do so this year despite peaking at only number 19 in Billboard’s radio playlist (rather than sales) orientated Hot 100, yet more proof of how false a picture that chart gives — because of the tune’s essentially instrumental nature, easy to talk over, it received far more radio airplay than was reported… GET OFF! 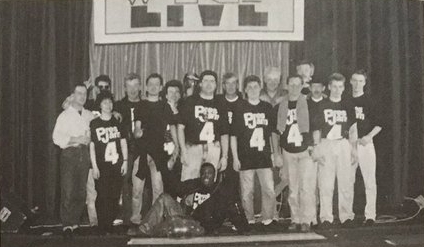 PRES JAM, as LiveWire’s Prestatyn soul weekender seems now to be called, went without a hitch over Easter on its third visit to the North Wales Pontins holiday camp. If the DJs’ choice of hip hop, house, Seventies oldies, jazz and (mainly on the closed circuit radio/TV) soul seemed predictably safe and rather low key, this appeared not to disappoint the crowd, who apparently never grew tired of ‘I Want You Back’ whether it was by Jackson 5 or Eric B & Rakim! Sadly, though, this weekender has become a time of musical entrenchment rather than experimentation, maybe because, thanks to current recording techniques, not many unknown newies have the power to cut through on first hearing in a large room.

Amongst the many star PAs, I really felt for Nitro Deluxe, who only has 10 per cent sight and was led on stage for what should have been a three minute slot, which he kept lengthening because — who can blame him — he probably had the greatest audience response he’ll ever have in his life. Terry Billy so enjoyed herself that she spent the entire weekend, up all night with the best of ’em! Wee Papa Girl Rappers were hanging out, too, but Simon Harris was crestfallen at being booed on stage, mainly, he thinks, because his record kept jumping. At least he was working live, whereas everyone else used a cassette — and, anyway, surely his friendship with Public Enemy gives him credibility even if he is in the top 20?

Capital Radio’s Tim Westwood made the journey just to introduce (in impressively full effect) the disappointingly rather ragged Cold Chillin’ crew of scolding shrill Roxanne Shanté, boringly striding and shouting MC Shan and Big Daddy Kane and — easily the standout — Biz Markie. His opening human beatbox demonstration, impersonating Doug E Fresh and the Fat Boys before putting the mic against his neck and even the top of his head to amplify his own style, was terrifically exciting, capped by the appearance of TJ Swan to rap ‘Make The Music With Your Mouth, Biz’.

Chubby young Al B. Sure! put on a squirming performance before the main Easter Sunday event, Joyce Sims’ first ever live gig anywhere with a backing band, which proved to be interesting as, when you consider she pits her distinctively plaintive vocal pitch against Mantronik’s electronic rhythms when recording, the live percussion turned ‘All And All’ into a Latin tune!

Her new US single, the revival of Barbara Acklin’s swinging ‘Love Makes A Woman’, as it does on record, featured the surprise guest appearance of Jimmy Castor (‘The Everything Man’) on sax, a highlight for those who knew what was happening. Pres Jam 4 is over the Guy Fawkes weekend of November 4/5/6 (booking details on 01-364 1212), so fireworks are a foregone conclusion, while heavily hinted as the star live attraction is — wait for it — Frankie Beverly and Maze! Whoosh!

THE BREAK BOYS ‘And The Break Goes On (The Original Freestyle Groove)’ (US Fourth Floor Records FF 1090)
Tommy Musto co-created terrific frantically exciting 119bpm percussive ‘Set It Off’-ish throbber based heavily on George Kranz’s ‘Din Daa Daa’, but a real journey into sound too, in six mixes (118¾bpm And The Dub Goes On), sure to be huge!

PEDRO ‘Goodfootin’’ (B.U.M. UM 001)
Nothing to do with either of the possible Pedros, Waterman and Tong, the latest bootleg styled, though doubtless later to be proved legal, “scam” is an infectious jerkily chugging 0-109⅓bpm shuffler sampling James Brown’s voice – to what could possibly be the Sly & Robbie backing track to the unreleased JB session that you may remember snuck out briefly as an ultra-rare ‘Beat Freaks’ B-side (Dub Mix flip), rather good.

E.U. ‘Da’Butt’ (US EMI-Manhattan 56083)
A massive US black hit (from Spike Lee’s ‘School Daze’ movie) but largely unknown here until Chris Hill brought a copy home from the States, this Marcus Miller-produced jauntily bumping go go jiggler proved to be one of the few newies that really cut through the crowd at Prestatyn, thanks to its “when you feel that notion put your backfield in motion” and “sexy sexy” chants, in 97bpm Extended Soundtrack, 97⅙-97½bpm Radio, and jerkily edited dubwise 96⅓-97½bpm B-Boy Mixes (Radio Edit too).

JUNGLE BROTHERS ‘Because I Got It Like That’ (US Idlers WAR 016)
Red Alert-mixed naggingly driving 103bpm oddly infectious talk-chanted jitterer, more funk than rap, with a deadly little organ riff amongst other doubtless pilfered ingredients (in four mixes), already raved about by Tim Jeffery.

LUTHER VANDROSS ‘I Gave It Up (When I Fell In Love)’ (Epic LUTH T6)
Breezily swinging fast 126½bpm canterer, for his pop fans, coupled with the bass snapped 0-119bpm ‘She’s A Super Lady‘ and Les Adams’ old DMC-featured ‘Luther In Love‘ megamix, slickly accelerating through ‘Never Too Much (111)/I Really Didn’t Mean It (115)/It’s Over Now (116½)/I Wanted Your Love (120)/For The Sweetness Of Your Love (124)/I’ll Let You Slide’ (133½bpm, presumably this frantic latter being the original cause of the whole mix).

YOUNG M.C. ‘I Let ‘Em Know’ (US Delicious Vinyl DV-004)
Fast talking jerky 0-101⅙bpm rap, another one based on Wild Cherry’s ‘Play That Funky Music’, and a tongue twisting ‘The Fastest Rhyme’ acappella started 98bpm piano jingled ‘My Name Is Young‘ flip (both with instrumentals too).

COOL C ‘Down To The Grissle’ (US Hilltop Hustlers HTH-003)
Steady B co-produced sparse stark 96⅙bpm rap jolter scratched by Tat Money, plus the JBs-ish 97⅓bpm ‘C Is Cool‘ (instrumentals too).

MEAT BEAT MANIFESTO ‘Got The Fear (Titanium Mix)’ (Sweatbox Records SOX 023R)
Samples crammed scratching angry intense (0-)103-102⅚-0bpm jitterer with a white boy rap quite wild in spurts but unlikely to get radio exposure thanks to its language – missing from the flip’s instrumental (0-)103⅙-0bpm Without Jack mix — these in fact being remixes of the earlier more stark and somehow harder original 102⅓-0bpm ‘Suck Hard’ (SOX 023), which was only ever on limited release but seemed to have more DJ support.

T.C. CURTIS ‘Pack Up Your Things And Get Out Of My Life (Out Of My Life Remix)‘ (Hot Melt 12TCT15R), simple 115⅓bpm whinneying lurcher made much busier with scratching and in-fills, plus a leaner percussive instrumental 117¼bpm Pack Up Remix flip.