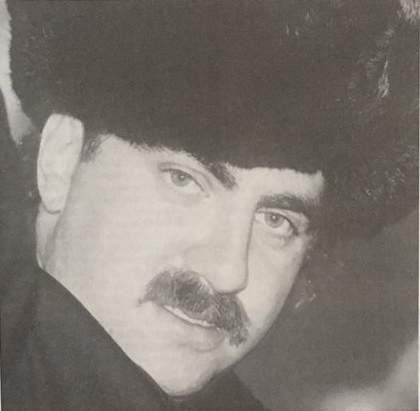 Arthur Baker is currently in the country overseeing the final preparation of his “solo” album on Breakout — in Jellybean-like style the first single (due early April) will feature Shirley Lewis while also supplying vocals on the album are Robert Owens, Will Downing, Jimi Somerville, Martin Fry, Andy McClusky of OMD and more. Arthur began to judge the Technics mixing finals, but then either got bored, or disgusted, or else had something better to do, and walked out halfway!

Cutmaster Swift, defending 1988 champ, came on last in the finals of the 1989 Technics UK DJ Mixing Championships and, as anticipated by the smart money, pulled it off to be the winning champ again! With delightful grace, grimaces and gyrations, his skill packed seven minutes included a Guy ‘Teddy’s Jam’ synch (good to find someone using this neglected killer), 45rpm fast cuts, and a hilarious “acieed” satirising trance dance with his T-shirt pulled over his head. In case the few photogenic stunts give a wrong impression to people who were not there, his manipulation of the decks was all important – and, what clinched it for him, Swift’s most stunning trick of all sounded like an expertly flawless fast cutback using two copies of a record to repeat the same phrase, except that there was only one record on the deck, and Swift was manually lifting the stylus back a groove precisely on the beat without any discernible break in sound! You has to see it to believe it!

A close and thoroughly deserved second was DJ Pogo, whose locomoting fast accurate tricks were breathtaking and gained a fantastic response, one of his new stunts being the manipulation of the mixer’s crossfader with his shoulder – he seemed like the winner until Swift followed him on stage.

Third was the crowd pleasing 15 years old Scratch Professor, who for my money was more “show business” than “scratch business”, appearing initially in shades with a pair of slinky Robert Palmer-style femmes fatales undulating behind him as she stood on a chair with his foot on the record (rather than the mixer, which was a switch), his mixing being reasonably accurate but with messy transitions at times – he repeated his “bad meaning good” fast cuts and ‘Bad’ transformer scratch.

DJ Biznizz to my mind was better, doing almost flawless fast cuts with lots of flash, and manipulating the crossfader with his tongue and foot.

One of the leading favourites to win, DJ Jay, who it must be remembered is only two years older than the young-for-his-age-looking Scratch Professor, was disappointingly much less accurate than usual, fast cutting but with jumps and skips, to cool audience response. The very partisan London audience at the Empire obviously perceived the finals to be an exclusively hip hop event, any suggestion of house (apart from Swift’s satire) getting a cool reception, and any overly acrobatic antics that detracted from the pure skill of scratching being actually booed.

Merseyside’s DJ Trix was given a hard time but won the crowd around with his “bring the noise” and other fast cuts in a typically slick, accurate and clever programme that was easily the equal of most of the aforementioned London jocks, but Manchester’s zanily acrobatic DJ Leaky Fresh, who scratched well apart from some sloppy cutbacks, was rudely booed, while Sheffield’s Mink was plagued by a repeatedly jumping tone arm yet attempted acrobatic tricks which were doomed to fail. 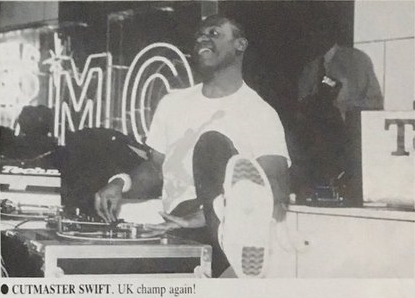 ROB BASE & DJ E-Z ROCK ‘It Takes Two’ (CityBeat CBZ 1224)
Despite already having hit number 24 in the pop chart this reissued rap classic could now get even higher, being the Lyn Collins ‘Think (About It)’ break beat based source of the “wooo”/“yeah” that seems these days to be over everything (and certainly much in evidence during the Technics mixing tour!), here again in its (0-)111bpm Original Version flipped by Derek B’s transformer scratched 112bpm Tuff Audio Mix, both previously released.

DEF JEF ‘On The Real Tip’ (Delicious Vinyl/Fourth & Broadway 12BRW 123)
Cheryl Lynn ‘Got To Be Real’/Gaz Sing Sing’/T La Rock & Jazzy Jay ‘It’s Yours’ based 102⅔bpm lazily rapped jogger, hotter here than and the UK A-side over the import’s Peter Brown ‘Dance With Me’ based and Joe Tex title line quoting jauntily wriggling jumpy 105½bpm ‘Give It Here‘ (both with instrumentals too), our pressing lacking ‘Just A Poet (It Feels Mighty Fine)‘.

K-9 POSSE ‘K-9 Posse’ (US Arista AL-8569)
The insistently rapping duo (of which one half is Eddie Murphy’s half brother) use vaguely familiar breaks and samples for a good debut album with the rolling jiggly scratching party atmosphere 0-96⅙-0bpm ‘Tough Cookie’, drily jolting urgent 103⅚bpm ‘It Gets No Deeper’, fast talking catchy lurching 110bpm ‘Turn That Down’, infectious jiggly 100⅔bpm ‘No Stoppin Or Standin Between The Rhyme’, muttering scratchy 101bpm ‘This Is The Way The Quick Cut Goes’, wordy sinuous 94⅙bpm ‘Somebody’s Brother’, cranking story rap 0-92⅙bpm ‘Say Who Say What’, urgent jittery 0-109⅓bpm ‘No Sell Out’, angrily lurching 0-101-0bpm ‘This Beat Is Military’, and previously 12-inched cough punctuated jittering 104-0bpm ‘Ain’t Nothin’ To It’.

WOMACK & WOMACK ‘Celebrate The World (Long)’ (Fourth & Broadway 12BRW 125), another whompingly bounding 130½bpm old fashioned soul backbeater in the same pop-pleasing style as ‘Teardrops’, this being one of those songs of hope for all mankind;

MICHAEL JACKSON ‘Leave Me Alone’ (Epic 654872 6), a bonus track from the CD version of ‘Bad’, unremixed for 12 inch, this typically nervy 123⅓bpm basher with all the usual trademarked pants, yelps, squeaks and whoops is perhaps revealingly flipped by his old classic style-setting 119 (intro)-119¼bpm ‘Don’t Stop ‘Til You Get Enough’ and tenderly hushed 46½bpm ‘Human Nature’;

JAKIE QUARTZ ‘A La Vie, A L’Amour (In The Cannes Mix)’ (PWL Continental PWLT 30), Pete Waterman launches his new Eurobeat-boosting label with this massive Hi-NRG hit from last year, for months a fixture in our chart, a French-singing plaintive girl’s clippety clopping SAW-style 124½bpm canterer in the Pete Hammond mix that was a Continental smash;

SEVENTH AVENUE ‘Standing By Your Side’ (Nightmare MARE 77), the hunkily posing boys (soon to reappear on Jive with a name change) now sound Brother Beyond-ish on a cleanly bounding 127¾-127⅔-128-127¾-128-0bpm simple chugger with one of those fluidly facile late Sixties/early Seventies basslines, the most radio orientated thing that Ian Levine has produced in ages (a pity then that he has lost the act);

STEVE POWERS ‘Blame It On My Conscience’ (Blue Moon BLUM 5), heartthrob-type jumpy 131⅔-0bpm churner with some wailing help halfway by Tracy Ackerman and another of Ian Levine’s datedly skipping basslines;

MONIE LOVE ‘I Can Do This (The Dancin’ Danny D Remix)’ (Cooltempo COOLXR 177), drily jittering percussively bubbling 117bpm nervier remix with a useful starker percappella-style 117bpm so-called House Acappella flip, for which it has been selling too;

ROB BASE & DJ EZ-ROCK ‘Get On The Dance Floor (The Danny D Remix)’ (Supreme Records SUPETX 139), Dancin’ Danny overdubs their ‘It Takes Two’, thus adding Lyn Collins’ “woo”/”yeah” break beat to the Jacksons and Black Riot in a slightly messy 118⅕bpm remix, with an 118⅔bpm Danny D Dub too;