ONLY SEVEN finalists are able to compete against the defending 1988 champion, Cutmaster Swift, for the 1989 Technics UK DJ Mixing title this Wednesday (15) at London’s Empire in Leicester Square … and here at last, after five weeks of exhaustive play-offs around the country, are those truly magnificent seven.

In the semi-finals, at Uxbridge’s Regals (where he said of his jealous critics, “They don’t want to battle on the turntables, they just want to fight”), DJ Pogo came first with a scratch mix programme that took a while to warm up but ended brilliantly with fantastic fast cuts creating a rhythm from one rapidly repeated beat, and a slurring, motoring frantic finale — in the middle of his set he had turned the Gemini mixer upside down and fast cut working the fader in reverse under it with his finger, then his bum, elbow, nose and most other protruberances!

15-year-old Scratch Professor came a very close second, having performed a deadly accurate programme, including “bad meaning good” cutbacks, ‘Bad’ transformer scratches and a synch, and even did a little dance.

Mink, from Sheffield’s FON Force, was totally untogether to begin with, putting on the wrong sides of records, but then showed flashes of cheeky brilliance in some dexterous manipulation and pulled off a unique slow scratch trick, earning a qualifying third place having repeated his entire set following sound problems with the Gemini mixer that he (as did so many others) had opted to use instead of the larger GLI.

Doctor K was the most impressive I’d ever seen him, doing very stark “black is black” cuts, and accurate cutbacks without using headphones, some at a speeded up 45rpm — a shame there wasn’t room for him in the final.

DJ “Whizz-Kidd” was not quite as tidy as he had been at Romford but had some good tricks (including a long synch of Kylie Minogue through the Lyn Collins “woo/yeah” break beat!) while DJ Carl, Rob Nelson (the Northern Ireland winner), and DJ Kut One were, with respect, not really up to the highly innovative standard of the obvious leaders.

At Chippenham’s Goldiggers, an excellent venue with a large stage so that all could see, making for a good night, Monie Love’s brother DJ Jay was the convincing winner with a programme of amazing fast accuracy, basically doing frantic cutbacks with immense cool and limb twisting dexterity, using a few tricks like his chin on the crossfader, and pulling his “14 K Gold” wool hat over his eyes in a blindfold, the crowd going apeshit!

Second was his colleague DJ Biznizz, thanks to a flawless performance. I regretted that DJ Reckless was unable to qualify, as his gracefully executed programme had included an excellent slow backwards and forwards scratch, accurate cutbacks and a long beat on beat running synch during which he sat on a chair at the front of the stage!

Norwich’s Sure Delite was extremely competent if a bit clinical (common amongst similar “bedroom mixers), while Dodger X, Terry Crofts and DJ Wizard Random were not up to the prevailing 1989 standard.

At Leigh’s hard to find (and hard to spell!) Reuebens, the most satisfactory result was a complete tie for the first place between DJ Leaky Fresh and DJ Trix. Leaky, aided by last year’s area winner Owen D, kicked off by falling over backwards — literally! — to be helped to his feet James Brown style. He then cavorted everywhere, mixing well all the while. Trix by contrast mixed with terrific dynamics, doing cutbacks without headphones as he built to a “bring the noise” finale of dazzling dexterity. Chris Harris as usual proved to be a strong scratch technician, but there were no more places to be won, Scotland’s Brian Hope (with a nicely chugging ‘Bring The Noise’/’Fake’ syncopation) and Newcastle’s house mixing Cool T being the only other contestants. 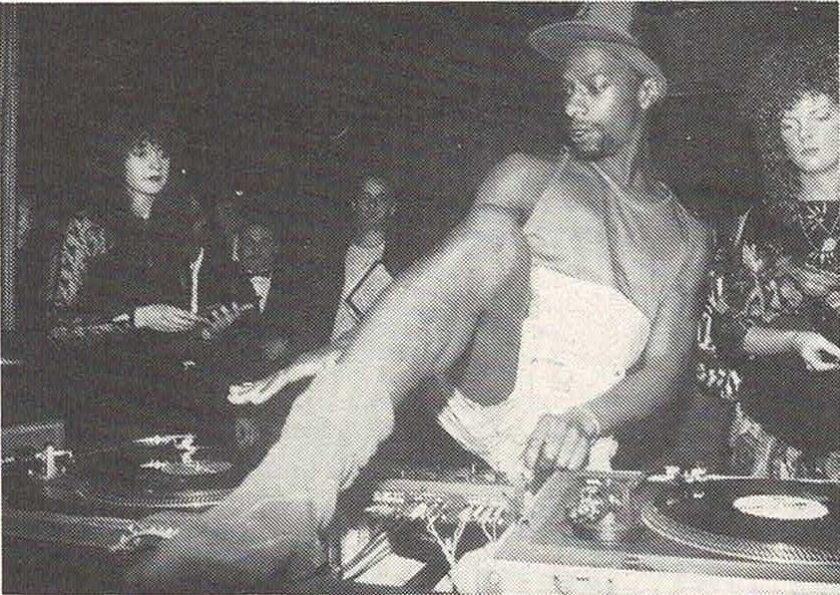 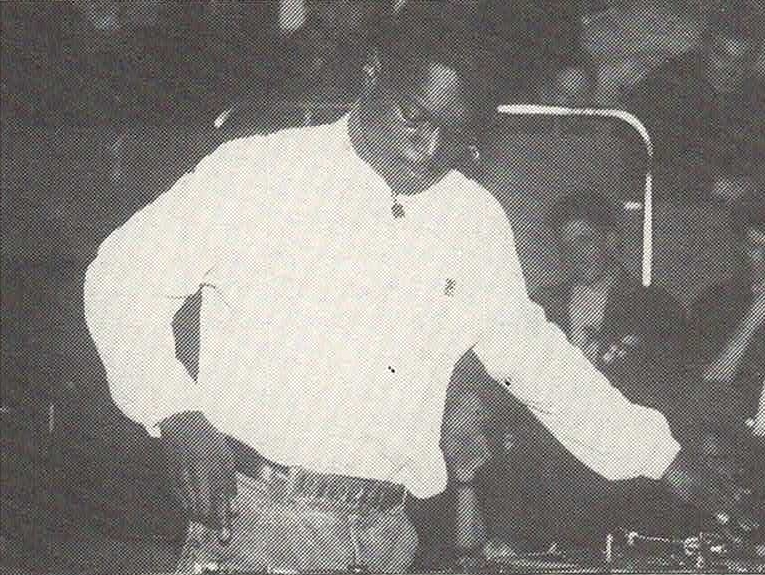 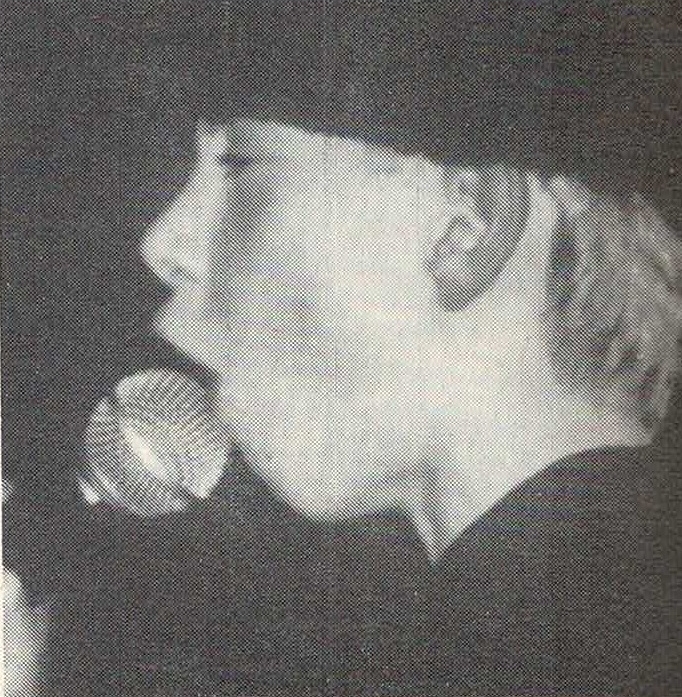 SAMM E.E., 11-year-old rapper from Bristol, was such a wow at Chippenham that he had to go through to the rapping finals!

SOUL II SOUL ‘Keep On Movin’ (Club Mix)’ (10 Records TENX 263)
Not due commercially until March 6 (with a Teddy Riley remix to follow!) but far too hot to hold, this superb bumpily sinuous slinky 93⅓bpm jogger features yet another — classily understated and the best yet? — female soul singer with a “yellow is the colour of sun rays” hookline and the Reggae Philharmonic Orchestra’s sometimes weirdly sawing live strings (in four mixes). Not to be missed!

TEN CITY ‘Foundation’ (Atlantic WX 249)
Double Exposure, rather than the Trammps, are the group who come most to my mind when listening to Marshall Jefferson’s deliberately mid-Seventies “Philly soul” styled treatment of this album, Byron Stingily’s wailing falsetto soaring through the massed strings and jumpy beats (including Philadelphia veteran Earl Young’s acoustic drums) in the ‘Ten Per Cent’- ish 122½bpm ‘Satisfaction’, scurrying 120⅓bpm ‘You Must Be The One‘, pshta pshta-ed tense 0-120bpm ‘Suspicious‘, really Philly-style 120¾bpm ‘For You‘, jittery chugging dull 114⅔bpm ‘Where Do We Go?‘, smoochy 64⅓/32⅙bpm ‘Close And Slow‘, mushy sweet 64¼bpm ‘Foundation‘, plus edited versions of Timmy Regisford’s more soulful 120⅘bpm Underground Mix of ‘That’s The Way Love Is’, the old 0-120⅔bpm ‘Devotion’ and 120⅕bpm ‘Right Back To You’ (but no ‘One Kiss Will Make It Better’ — didn’t it fit the prevailing style?). Somehow the new tracks sound cramped in album form, which won’t stop such an eagerly awaited debut set selling, but they like the edited hits really need to be stretched out.

PHASE II ‘Reachin’ (Brotherhood Mix)’ (RePublic Records LICT 006X)
The excellent Kevin (Blaze) Hedge produced anxiously soulful thumping strider, for months a fixture in The Club Chart, is due for reissue on March 6 in its previously (separately) released original 0-120⅔-0bpm Brotherhood Mix and percussively pattering smoother 121⅓bpm Latin Workout Mix, flipped by November 1987’s ‘It’s A Mystery’ in its vigorously bounding stuttery (0-)120⅓bpm Original Mystery Mix and a terrific brand new Blaze created much classier jazzily loping husky (0-)120bpm Mystery II U Mix — this latter plus three other similarly styled new mixes, all of which would not fit due to the Gallup chart’s record duration regulations, have also been pressed as a strictly limited edition 250 copies (it says here) for specialist shops,

‘IT’S A MYSTERY (OF LOVE’ (RePublic Records LICT 016P),
The Mystery II U Mix on this pressing being (0-)120⅔bpm, with instrumental brassy baritone 120½-0bpm Mysterious and Out Of The Blue Mixes, and a sparse vocal 120¾bpm Blue Mix.

CANDI McKENZIE ‘Wanna Be Good Tonight’ (Cooltempo COOLXR 181)
Not due fully for a fortnight but hot on pre-release promo, this uninformatively labelled double-sider’s style suggests a Dancin’ Danny D production as the jerkily bounding 122bpm A-side, with Atmosfear-like phased cymbal hiss, is flipped by a totally different much slower but jumpily jiggling 108bpm Maze ‘Twilight’ (and hence DSM!) tempoed Topcat Mix, the side it’s selling for.

ALEXANDER O’NEAL ‘Hearsay <89> (Extended Mix)’ (Tabu 654667 6)
I (and, I suspect, many others!) have rather lost count of just what has and has not been pulled as a single from his ‘Hearsay’ album, but by its omission (despite being the “title” track) from the ‘Hearsay (All Mixed Up)’ remix edition of that album it’s probable that this song is only now making its first appearance on 12 inch, in a chuggingly thumping beefy rolling 101⅙bpm brand new Keith Cohen remix (Dub and Percapella too, plus the chunkily jiggly 100⅙bpm ‘You Were Meant To Be My Lady (Club 7″)’ — which latter was “all mixed up” before!).

2 PUERTO RICANS, A BLACK MAN AND A DOMINICAN ‘Scandalous (Remix)’ (Syncopate 12SYX 20)
Why this couldn’t have been out first is a mystery, instead of Clivilles & Cole’s original dreadful untidy jittering mix it’s a more typical piano and organ jangled 123⅘bpm chunky canterer with lurching offbeats which now “do it properly”, cushioning the groaning, panting, chanting and complaining girls far more comfortably (sparsely tapping also 123⅘bpm but different Dub and 123½-0bpm vocal Edit too).