DONNA SUMMER: ‘Love To Love You Baby’ (GTO GT 17 – single; GTLP 008 – album)
Out here since March this Munich-made American’s pseudo-sexy monotonous thumper has just caught on big in US discos.  Expanded to fill the whole of one side of the new album, her ‘Pillow Talk’-type cooing and moaning gets spread a bit thin but the Barry White-ish backing’s several shifts could well make her the toast of Britain too.

PENNY MCLEAN: ‘Lady Bump’ / ‘The Lady Bumps On’ (EMI 2365)
Another US biggie from abroad, this bouncy bumper’s being played on Canadian import although it’s probably from Germany, where it’s currently number one.  Penny sounds dreadful, but the B-side continuation is bearable being mainly instrumental with lotsa drums, bass and strings.

CIMARONS: ‘Wicky Wacky’ (Vulcan VUL 1005)
In fact the flip of ‘Tradition’, this Fatback Band oldie is now absolutely terrific, full of incredibly strong rhythm and an overall James Brown feel.  Dig it in stereo!  Surely nobody can sit still to this?
★ JH PICK

DRIFTERS: ‘Can I Take You Home Little Girl’ (Bell 1462)
More MOR triteness from the veterans, whose ‘Under The Boardwalk’ (Atlantic K 10691) is re-issued too.

DERRICK HARRIOT: ‘Eighteen With A Bullet’ (Trojan TR 7973)
Pete Wingfield’s summertime smash sounds like a pick to click again in this superb reggaefication, the Version flip of which has a terrific stereo gimmick.
★ JH PICK

CHUCK JACKSON: ‘I’ve Got The Need’ (All Platinum 6146310)
Much requested as by the Moments on their ‘Sharp’ LP, this smooth though fast wukka-wukker finds underrated Chuck in fine fettle.

MOHAWKS: ‘The Champ’ (Pama PM 719)
British recorded but totally American in sound, this funky organ instrumental rip-off of ‘Tramp’ was a disco smash in ’68.
★ JH PICK

BLUE MAGIC: ‘Magic Of The Blue’ (Atlantic K 10689)
Already picking up tips, this Norman Harris-prod Philly hustler starts with a lot of instrumental before the very second-fiddle vocals appear.  Bit like a male Silver Convention.

REVELATION: ‘Get Ready For This’ (RSO 2090167)
Co-prod by Norman Harris, this bouncy smooth thumper features a lead singer who’s actually given a chance, but it’s still a bit slick.

BASIC BLACK & PEARL: ‘There’ll Come A Time, There’ll Come A Day’ (Bus Stop BUS 1039)
Evidently from Canada, this soulful and sweet-singing chick gets a good bouncy Al Green-type drumkit pushing her along, and the result’s a grower.

AL GREEN: ‘Full Of Fire’ (London HLU 10511)
Issued (in demo form, anyway) with long disco version flip, Al’s cool newie is just like all the others but with maybe more propulsive bouncy drumming behind him.

BOTTOM & COMPANY: ‘Here For The Party’ (Motown M1363F)
Bang in the People’s Choice groove, this funky clap rhythm chanter hasn’t shown up yet but is surely bound to become a disco delight.  It sounds more like Britain than do most American R&B hits nowadays.

SOUL TRAIN GANG: ‘Soul Train ’75’ (Soul Train SB 10400)
Tied in with the big US TV show, this Gene Page-arranged hustler is streaming straight to the top in the R&B charts.  Slinky chix coo the lyrics, while flipside the strings and things take over for an instrumental run through that’s rhythmically stronger somehow.  Pretty label design.

TOMORROW’S PROMISE: ‘You’re Everything Good To Me’ (Mercury 73790)
The Bert DeCoteaux-arranged rhythm keeps pumping away as the guys do their Temptations impressions and the strings shimmer.  The whole effect is nice and happy, with the rhythm being more of a bumper if anything.  Pleasantly fresh. 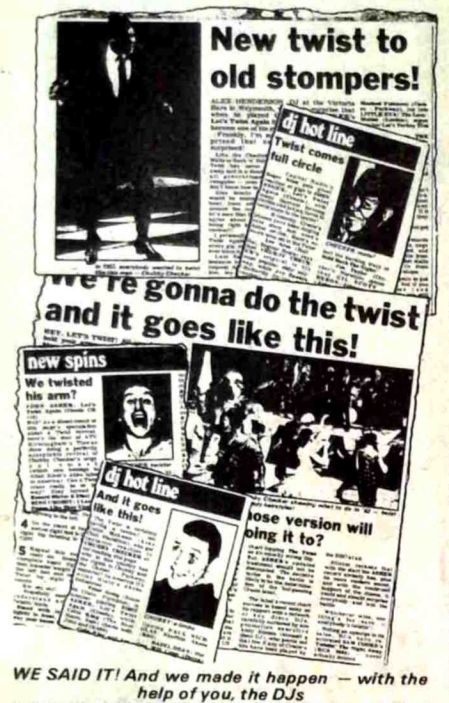 We gave a new twist to the system?

MY THANKS to the many of you who have written in to say that without the co-ordinating impetus given it by this Disco Page, The Twist would never have been a craze again.

As the article that started it all said, I’m surprised that any DJ could be surprised to find the Twist going over well.

It’s remained one of the most obvious crowd rousers ever since its first time around.

Still, it does seem that there were a lot of DJs who hadn’t tried it, and when suddenly all at once they did – bingo! – the sensation that’s sweepin’ the nation.

Never before has a music paper had the influence to start (or, rather, restart) a dance craze.

Neither can many hits have been created without radio plays to promote them.

Now, however, prompted by Record Mirror & Disc, the DJs of Britain have beaten the Beeb and demonstrated the power of the disco by pushing John Asher way up the chart before Chubby Checker.

Similarly, they put the Diversions’ Fatty Bum Bum in the chart despite Carl Malcolm.

It seems that this might be a good opportunity for me to get out and meet some of the club DJs around the country, and help them put on a special Twist night.

I have of course got all the old Twist records, plus all the other similar dance crazes, so that depending on the interest shown we could put on either just a Twist show or else a mammoth extravaganza with all the dance records from ’55 to ’75.

Whether we can find anyone who can DO all those dances is another matter!

Anyway, if any club managers, social secretaries, or the like, are interested, please drop me a line c/o Record Mirror & Disc.

A big deal presentation can be arranged, but basically I’d just like to bring along my box of records and have some fun with the resident DJ, as it’ll be a chance to say “Hi” in person.

Let me know soon, so I can work out an itinerary, huh? See ya!

THE FIRST inklings of a Jitterbug craze, Renta Santa star Chris Hill (Gold Mine, Canvey Island) charts BENNY GOODMAN: Stompin’ At The Savoy (RCA) and MANHATTAN TRANSFER: Tuxedo Junction (Atlantic) amongst the Southern Soul, and infos that his audiences love to get in the mood between the funky numbers.

Top of his list, though, is RAMSEY LEWIS: Spiderman (US Columbia), also charted by Les “Godfather” Spaine (Timepiece, Liverpool), who sez that a flipped TREMELOES: Ascot Cowboys (DJM) could be a disco biggie.

Maybe it runs in the blood, as both Colin McLean (Acas Club, Hamilton) and Mike McLean (Strathdisco, Glasgow), tip BIDDU: I Could Have Danced All Night (Epic) and LINDA RONSTADT: Heatwave (Asylum).

My reviews of BILL AMESBURY: Every Girl In The World Tonight (Power Exchange) and LAURIE HEATH: We Danced It Our Way (EMI) never got printed, so I’m glad to see Doctor John (Disco-Tech, Telford) saying they both go down superbly at his type of gig.

THIS WEEK’S good advice comes from funky Les Spaine (Timepiece, Liverpool). Les sez that a good way for dee-jays to keep themselves on the ball is to tape-record their shows every now and then. Small faults and self indulgences can then be picked out when the tape is played back at home.

Also (and this is my advice now), it’s a good idea to have a tape of an earlier show standing by at a gig just in case an emergency calls you away from the turntables.

This tape can also be useful in the early stages of a party when nobody is dancing but suitable music is needed until they start, at which point the DJ can take over live.