Theo Loyla is looking for further positive pledges of support from DJs and club managers for the Disco Aid project on Saturday, November 1, so if you haven’t already, please affirm your support in writing to 6 Tomay Cottages, Hawthorne Corner, Herne Bay, Kent CT6 6TH – you’ll be agreeing to donate a supplementary admission fee plus any other funds raised specially that night to help Band Aid and other British charities … Robert Geldof, KBE, has so far declined to lend his support by stepping into the nearest disco for five minutes on that night … Tony Prince launches his commercial record label, created as a production outlet for DJs, DMC Records, at London’s new Limelight next Wednesday (6) with Chad Jackson, Les Adams and Paul Dakeyne as guest mixers – so already the exodus has begun from the neighbouring Hippodrome just down Charing Cross Road! … South Norwood confusingly has a Limelight as well, where this Friday (1) Froggy joins regulars Chris Stewart and Lyndon T … I looked in on New York’s Stringfellows, bigger seeming and emptier than London’s, where DJs Lynn Condon, Beladee Nayhem and Lisa Lace are lovely girls but not the standard of mixers one expects of the Big Apple … Real Thing have signed with Jive for new material … Pieces Of A Dream ‘Joyride’ LP (Manhattan MTL 1004) is now out here, and their UK 12 inch turns out to include the jagged angry 116-0-117bpm jazz instrumental ‘Outside In’ … Ralph Tee is compiling an Arista Masters oldies series of re-releases, jazz, soul and dance, first due being Phyllis Hyman ‘You Know How To Love Me’ and Breakwater ‘Say You Love Me Girl’, soon … Martin Freeland is now also no longer at EMI … Randy Muller has been extensively remixing Skyy ‘Non-Stop’ … Steve Davis, soul fanatic snooker champ, sits in hosting Essex Radio’s weekday evening soul show all next week – I hope he’s practised his cueing! … Lesley Gore’s ‘It’s My Party’ has been accurately recreated as ‘It’s My Body’ in a milk commercial on US radio … Melba Moore’s US TV sitcom series ‘Melba’ debuted unfortunately the night after the NASA space shuttle disaster, and got such poor ratings it was immediately pulled off air; however the remaining episodes are being shown through August on CBS-TV … ‘EastEnders’ actress Sharon Dee Clarke (‘Mad Lizzie’) has been recorded by Ian Levine for Damon Rochefort’s own production company … Sunday (3) Tony Monson and Jeff Young soul an afternoon 2-6pm Thames boat trip, details on 01-533 0117 … Leicester Square’s Secret Rendezvous being defunct, Simon Goffe starts soulful Fools’ Paradise on Fridays from next week (8) at Soho’s Gossips – he seems to have found another good appropriate current song title for his club’s name … Angela Bofill, Stanley Clarke, Kenny G and Dave Valentin make up a revised Soul-Jazz Explosion ’86 package playing Hammersmith Odeon August 30/31 … Harlem’s legendary Apollo Theatre has brought back its traditional amateur nights on Wednesdays, but as a regular 7.30pm evening show rather than as an extra after the main show has ended – because now there is no main show, the place being used for one-off engagements, whereas in its heyday every week saw a different package playing five shows a day, seven days a week, with a movie and newsreel between each show … Eric Mercury was, as co-writer/producer of the original, interested to hear about all the “activity” surrounding the ‘80s Ladies ‘Turned On To You’ – on our second meeting in New York, I caught him playing piano while Daryl Pandy rehearsed a brand new but timeless classic-style blues that could have been from any decade this century, magical! … Justin Strauss, DJ at the fantastic Area (which changes its elaborate décor theme every month), cleverly combined Gwen Guthrie and Tambi … I’m actually saving further New York news like the New Music Seminar’s mixing competition fiasco to accompany other relevant photos … Hot Licks are expanding their video DJ mailing list on 01-486 8794 … Colin Curtis and Pete Haigh soul-jazz Manchester’s Broosters Mondays … Aaron Lewison-White’s long standing residency at Drayton near Chichester has changed names from Brooksies to the new Thursdays … Ken ‘B’ Brudenell has left Southampton Raffles for the freer musical climes of Bracknell Oceans (Fri/Sat) … Mondo Kané is, like the ‘Mondo Cane’ film title that inspired it, pronounced “Mondo Carnay” … Billboard’s Rhythm & The Blues columnist Nelson George observes, “It is amazing how many white English singers want to be Otis Redding and how many black American singers want to be Barry Manilow” – maybe (while shouting “You tell ‘em Nelson!”) that’s because here we can appreciate at a distance the artistry of soul without having had to live through and personally endure its restrictive heritage … Rob Day, commuting from Fridays at New Cross Harp Club to Saturdays at Manchester Hacienda, wonders whether, if it were released tomorrow on DJ International, ‘Blue Monday’ would be considered as anything other than “house”? … it’s getting difficult to tell what’s “house” and what’s Hi-NRG these days … SORRY, WRONG BEAT! 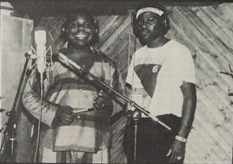 DARYL PANDY, the lovable man mountain with the mighty mouth and six-and-a-half octave range, is actually the voice heard on producer FARLEY ‘JACKMASTER’ FUNK’s ‘Love Can’t Turn Around’ (London LONX 105), or more accurately its really raving ‘Dub Can’t Turn Around’, which oddly is the main vocal side, at 122bpm the most exciting “house” hit to come from Chicago so far. Daryl and (real name) Farley Keith were snapped above at Arthur Baker’s Shakedown Studio while re-recording the vocal for subsequent repressings, although the original is now out here, where it and other “house” records are being welcomed as at last a faster dance music that’s reasonably credible.

Daryl’s is also the lead vocal on FARM BOY ‘Move’ (US DJ International Records DJ-912), produced by fresh-faced boy Dean Anderson, a skittery 118¼-0bpm bounding “house” stormer with emulator breaks between bursts of imperative beefy singing (later by Etheridge Williams too), the vocally concise Radio Mix possibly being best of its four versions. Daryl is dynamite in person, a star waiting to be discovered, and can’t wait to come here to visit Wales, the land of his surname!

SLEEPING BAG Records held a roof party above their Manhattan office at 67th & Broadway during the New Music Seminar, and the DJ up on the roof was none other than an unheralded MANTRONIK, caught here cueing up some hot “house” on the Trax label!

MICHAEL McDONALD ‘Sweet Freedom’ (US MCA Records MCA-23641)
Written, arranged and co-produced by Rod Temperton for the Gregory Hines/Billy Crystal movie ‘Running Scared’, and far hotter than Michael’s current Warner Bros seven inch, this exotically lurching 114¼bpm loper (in four marathon mixes) has hints of ‘All Night Long (All Night)’ but mainly is another ‘Yah Mo B There’!

DAVIS/PINCKNEY PROJECT ‘You Can Dance (If You Want To)’ (US Studio Records STU-911)
Fascinatingly arranged 103⅓bpm gradually fleshing out while drily husky singer Lorenzo Queen carries the swing, which is considerable (inst flip). Subtle, downbeat, dynamite!

SHIRLEY JONES ‘Do You Get Enough Love?’ (Philadelphia International 12PIR 2, via EMI)
The solo Jones Girl’s US smash is a Bunny Sigler-created tremendous gospelish 67bpm slow roller with pent-up piano and confidential rap which, despite the whole side one of her also UK-issued LP ‘Always In The Mood’ (PHIL 4000) being other stunning slowies, remains the standout track in our chart. Make it a hit here, too.

KENNY G ‘What Does It Take (To Win Your Love)’ (US Arista ADI-9517)
Produced now by Preston Glass instead of Kashif, saxist Kenny Gorelick revives Jr Walker’s still familiar 1969 hit in an only mildly updated juddery 103bpm treatment (in three mixes), more ponderous than the original nostalgia appeal.

B B & Q ‘(I’m A) Dreamer’ (US Elektra/Pretty Pearl 0-66844)
Freshly remixed by Shep Pettibone, but only reluctantly stocked at some shops in the mistaken belief it was nothing new (thanks, Jerry!), the admittedly much released SOS Band/Change-type track now stutters and staggers with a crisply rolling 109-0bpm tap beat, in four versions.

WILLIE COLLINS ‘Where You Gonna Be Tonight?’ (US Capitol V-15239)
A bit late for us, the singing postman’s hit has been remixed by Victor Flores into a girls-started, more deliberately rolling, new 113bpm long version (0-113bpm dub, edit, acappella too) – which, if it isn’t rushed here, will presumably flip the follow-up, right?

DOUG E FRESH & THE GET FRESH CREW ‘All The Way To Heaven’ (Cooltempo COOLX 119)
Catchy, if now none too surprising, 0-95-0bpm go go hip hop rap with zany human beat box, scratching, and some sharp brass, flipped by the acappella human beat boxed ‘Nuthin’’ and their instrumentals.

COLONEL ABRAMS ‘Over And Over’ (US MCA Records MCA-23636)
Although the sleeve doesn’t say so, it contains six mixes of this tapping and tugging old album track, Louil Silas Jr’s sombre (0-)107bpm three on the West Coast A-side and Larry Patterson’s lighter (0-)110¼bpm three on the East Coast flip. Nagging rather than jumping.

SATIN, SILK & LACE ‘Your Love’ (US Prelude PRL D703)
Here’s a rum do, another more densely soulful, purposeful and slightly slower 110¼bpm version (in four mixes) by the same producer, Greg Carmichael, of Innerlife’s current 115½bpm import hit. Both have points in their favour, so may the best girls win!

VIVIAN LEE ‘Music Is So Wonderful’ (US Jeffer Seif JR-801)
Alluding to her “Gone With The Wind” near-namesake with a “Frankly my dear” intro, this wailing good exciting 0-120bpm galloper until recently would have been considered Hi-NRG but now with its droning Abrams-ish male support is closer to “house” (strong dub flip, and raw soulful 73bpm ‘Taking It Easy’).

AM-FM ‘Hip-Hop (Skable-De-Wop)’ (US TTED Records Inc TDE-3009)
Despite the title, this rattling 103bpm chanter isn’t go go hip hop, it’s just go go, followed by the possibly catchier 106-0bpm ‘All We Want Is Go-Go’ and flipped by their instrumentals.