STEVE WALSH is organising an all-star single to benefit the November 1 national Disco Aid charity night, and as it’s being recorded this weekend he needs to hear immediately on 01-580 0083/4 from any so far uncontacted dance acts who’d like to join in … PLASA, the equipment exhibition, is evidently open to the public at Hammersmith’s Novotel this Sunday (31) until Wednesday (3), 11am-6pm … Tony Blackburn keeps claiming his weekday morning Radio London show is “the most listened to” in the South-East, and now he’s got official BBC audience survey figures to prove it! … Krystol ‘Passion From A Woman‘ has been shrink-wrapped with a bonus 12 inch that couples the underground classic 106bpm ‘After The Dance Is Through‘ and 110⅔bpm ‘The Things That Men Do‘ (DTA 7203) – but mightn’t Epic have been surprised if they’d merely released that coupling in its own right, all along? … Boiling Point are reissuing a couple of 1983 hits in new Timmy Regisford remixes, the bassier 0-98⅚-99½-99-0bpm Monyaka ‘Go De Yaka’ (POSPX 820) and messily unimproved 121½-121¾bpm Hot Streak ‘Body Work’ (POSPX 821) … Supreme Records’ first birthday party, with Graham Gold jocking, saw Mel & Kim twirling like twin poppets, Princess sneaking in despite leaving the label, Nicky Holloway wearing a bog brush in his barnet, and Chris Hill dancing at Stringfellows – a social night that brought many a DJ and his lady “Up West”, most ending up in Chinatown for an early hours chop suey … RCA in the States are starting a new dance label, AFT Records … Gwen Guthrie finally topped US Club Play, Madonna 12 Inch Sales in Billboard … Young & Co ‘Such A Feeling’ is getting a Timmy Regisford remix now it’s been picked up by US Atlantic … Georgie Fame is recording for Ensign … Island’s go go movie ‘Good To Go’ appears finally to have opened in the States, where go go fans are reportedly disappointed it only features brief snatches of the soundtrack song … Darryl Pandy (who spent a considerable fortune in London at Gucci buying luggage, shoes and presents) has also cut a great soul slowie dedicated to his kid sister, ‘Krystale’ … Farley ‘Jackmaster’ Funk’s new ‘Houseapella‘ instrumental sloppily includes some stray conversation if you listen closely – incidentally, Radio One DJs are already saying what a great singer Farley is! … DJ International Records’ hustling vice-president Lewis Pitzele, ever looking for a deal, intends setting up his own Jackin’ Records, Doo’ Rock and Wicked Pulse labels here … Steve ‘Silk’ Hurley ‘Jack Your Body’ owes a melodic debt to Yazoo ‘Situation‘ … psst! – why does Damon Rochefort call himself Nellie ‘Mixmaster’ Rush, and sing like the Village People? … Marshall Jefferson also records as Virgo … The Incredible Mr Freeze’s rappers are Daddy O and Delight from the group Stetasonic … The Boogie Boys of course are from Harlem, not LA, it was the label that confused me … London’s hipper clubs look like turning The Naturals’ tapping and burbling 106⅙bpm ‘Funky Rasta‘ (Jamaican Sunshine) into the latest big boom revival — always an underground threat since 1981, it’s now being prodded by DJ Tim Westwood (who unearthed supplies in New York), and by Dancin’ Danny Poku (who wishes he hadn’t!) … London’s Metropolitan Police evidently now have a “Warehouse Squad” to close down illegal public parties, but two warehouse style parties that are perfectly legal this Saturday (30) are Wicked Pulse at Camberwell Green’s Dickie Dirts (in the old cinema), and a North meets South allniter at Hackney Central station’s Club Oo! Mankind, where Colin Curtis (if fit), Chris Reid, Edgar & Calvin clash with Jonathan Moore, Andy McConnell and Baz fe Jaz for a soul-funk-jazz throwdown … Wicked Pulse with Soul To Soul is also on Sundays in Covent Garden’s Africa Centre, sweaty, smoky, funky and friendly … Monday (1) Ralph Tee presents “the sisters of soul”, live and on vinyl, at London’s Limelight … Jerry Green got mugged while actually supplying the sound at an LWR gig in New Cross, losing a gold chain from around his neck … Gilles Peterson on Tuesday (2) starts a weekly 10pm-midnight ‘Mad On Jazz’ Radio London show — nice one! … Colin Hudd’s hot mix is Adonis into the old Voyage ‘East To West‘, the “house” tempo bringing other fast oldies back into play … Five Star (I’ve yet to receive their LP) are being sponsored by Cadbury’s Crunchie bar on their upcoming UK tour – not quite in the Pepsi league maybe, but just as sweet for young fans’ teeth! … SORRY, WRONG BEAT! 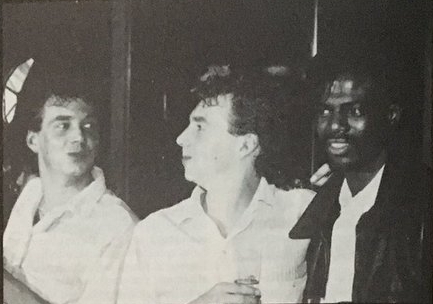 LE PLAZA in Peckham used to be called Kisses and was one of South London’s funkiest spots until its name change, which coincided with a desire for respectability and an older class of club-goer. The trouble is, older folks don’t go to clubs, so it’s back to funk and plenty of “house” every Saturday there now with the return of KISS-fm’s Gordon Mac (admiring his twin in the mirror) and Steve Jackson. Jack the house!

Obviously due soon here on London too, as promised this is the storming 122-122⅓-0bpm revamped “house” smash with re-recorded tighter vocals by the this time fully credited Darryl ‘Diva’ Pandy (above), plus excitingly stripped down vocal and instrumental ‘Houseapella’ dub versions. The mighty mouthed opera singer’s voice is apparently proving too rich and meaty for some people’s taste, but that’s probably just the shock of the new.

GIL SILVERBIRD ‘We Can’t Go On Without Love’ (US T.C. Records TC 7009)
Harking back to what many consider a golden era of soul, the late Seventies, this scampering 119¾-119-118-117¼-118bpm canterer has excellent semi-falsetto singing, thunderthumbs bass and some Sanborn-style sax in one of the breaks (inst flip). One for the suburbs?

LOOSE ENDS ‘Slowdown’ (Virgin VS 884-12)
Possibly aiming to outdo DMC Records, twin-packed promotionally if not commercially this DJ Club Pack contains, along with edits and dubs, three main versions of a rambling but always interestingly textured Nick Martinelli-produced wriggly swayer, recognisably typical under all the surface activity — which is considerable. Nick’s own 105⅚bpm mix is awash with effects and tricky edits, some human beat box, laughter and squalling sax standing out halfway. Dancin’ Danny D & Godwin Logie’s straightforwardly jolting 102½bpm mix if anything is what might have been expected of Martinelli, again with honking sax a more integral part. The guys in the group’s self-produced 93⅚bpm ‘Slow Jam‘ variation emphasises the vocal interplay (good on all versions) in an almost jazz-hip hop way, with cool flute this time. Very interesting, but, as the whole package adds up to more than the song, which version is a hit? Or is that what all this early choice is intended to decide?

ALEXANDER O’NEAL ‘You Were Meant To Be My Lady (Not My Girl) (Remix)’ (Tabu 650048-6)
While we await his new material, this old album track remixed by producers Jam & Lewis is a snappily rolling taut 101bpm singalong swayer in four different versions, with the Party Mix full of amusing chatter.

MICHAEL McDONALD ‘Sweet Freedom (TRS Mix)’ (MCA Records MCAT 1073)
Finally scheduled here now the Warner Bros’s oldie has flopped, the Rod Temperton-created 114½bpm successor to ‘Yah Mo B There’ makes as UK A-side the less good US B-side 8:25 version, so the 10:10 Club Version (here called the SILAS Mix) gets shoved on the flip with a new short ‘The Freedom Eights‘ instrumental treatment. Obviously all four US versions would have over-run the total time permitted on a UK 12 inch, but it’s a pity the best mix may thus be ignored – which won’t stop the song being a smash!

FATBACK ‘I Found Lovin’ (London Boys Remix)’ (Important Records TANRT 10)
London’s enduring black anthem remixed by Steve Walsh with a new jittering and jolting 104½bpm backbeat, the big attraction however being the flip’s 105bpm “Anthem” Mix which actually includes Steve’s Radio London Soul Night Out exhortations with live crowd response – but no mention of “I am Steve Walsh”! Chris Hill must be kicking himself he never committed to vinyl his own superior wind-ups.

OCTAVIA ‘2 The Limit’ (US Pow Wow PW 415)
Following his brush with Fatback, producer/writer Kenny Beck now homes in on Princess, this powerful pent-up jiggly 100bpm backbeat half-stepper (inst flip) being wailed by the star of a stage musical based on ‘Just One Look’ originator Doris Troy’s career, ‘Mama I Want To Sing’.