THIS WEEKEND’S New York Jazz Explosion at Hammersmith Odeon has had to be postponed due to Phyllis Hyman’s serious illness, but all tickets will be valid on the new dates, July 26/27 . . . Home Office decisions about not only the licence applicants but also now the very existence of the planned two year Community Radio “experiment” have been shelved again until the autumn at earliest (when expected last Christmas), to follow publication and Parliamentary debate of another Green Paper on the deregulation of local radio as a whole — it seems lobbying by ILR stations has delayed the experiment actually being put into practice, the Green Paper now suggesting that maybe existing local stations should be allowed to concentrate on one type of music or programming applicable to their market if they want, instead of having to be all things to all men, which could open the door to US-style formatted radio (although it won’t stop disgruntled pirate operators returning to the air rather than waiting in the ever receding hope of a community licence) . . . Lovebug Starski ‘Amityville’ is being rushed out here! . . . William Bell’s UK label turns out to be called Tout Ensemble, as late in the day distributors Pinnacle discovered there was already another Absolute Records . . . Thomas & Taylor’s US pressings were in fact only for export, to help get a deal here first, and Aurra’s UK top 20 smash is similarly unsigned in the States — Aurra, who maybe would have sounded beefier on ‘Top Of The Pops’ if they hadn’t sung live, repeated their Bognor success to be biggest newie at Caister too (where numbers were about half the normal but everyone had a hot time) . . . Charisma have reissued 1984’s haunting ‘All Night Long’-based 94½bpm The World’s Famous Supreme Team ‘Hey! DJ‘ (TEAM 1-12) . . . Patti LaBelle & Michael McDonald is 92½bpm here . . . Elite’s new girl Nikki Tovell is rebuilding their DJ mailing list on 01-903 0305 . . . London readers may be in time this Wednesday (30) for the Disco Mix Club’s special Megamixers night at the Hippodrome with Chad Jackson, Les Adams, Paul Dakeyne and more . . . Chad Jackson joins nine other international mixing DJs competing in the Roman ampitheatre at Nimes in Southern France during the town’s Pentecostal Festival on Sat/Sun May 17/18, Tina Turner heading the judges and the arena’s 40,000 watt disco beamed by satellite into 100 French clubs simultaneously to set up a world record! . . . I appear to be chairing the International DJ Debate at New York’s New Music Seminar on July 13-16: it’s an expensive jaunt, but the Disco Mix Club can give you travel advice on 06286-67276, or contact the Seminar’s registration office direct on 010-1-212-722-2115 . . . Tony Blackburn & Steve Walsh celebrate Radio London’s 50th Soul Night Out at Hammersmith Palais this Thursday (1) with guests Aurra, Oliver Cheatham, Maxi Priest, Sandra Cross . . . Jonathan More’s eclectically mixed up Meltdown night has moved to Mayfair Legends Fridays . . . Bank Holiday Monday (5) finds Steve Walsh guesting at Forest Gate Upper Cut Stadium (“South London Posse!”), and Luton Ronelles at midnight . . . Capital’s cheeky chappie Gary Crowley and CBS’s cool Julian Palmer start funking The Floor Board weekly at Kingston Cinderella’s next Wednesday (7) . . . Pete Haigh funks Morecambe’s Old Rangoon wine bar Wednesday next (7) and fortnight (20) . . . Eurobeat/Hi-NRG releases include Kiki Dee ‘Another Day Comes (Another Day Goes)‘ (Columbia 12DB 9122), unusual exciting 123½bpm gospel-ish surger a bit lost amidst its rhythm but now tidied up in Ian Levine’s 124bpm Nightmare Mix (12KIKI 1); Louise Thomas ‘Reflex Action‘ (R&B RBS 1803), Levine & Trench-prod/penned emphatically chanted clodhopping 118bpm rhumba; Hazell Dean ‘E.S.P.‘ (EMI 12 EMI 5560), dreary subdued 110½bpm plodder somehow high in the chart; Boney M ‘Young, Free And Single‘ (Carrere CART 384), simple 128bpm Hi-NRG chant with Duane Eddy-ish twangs . . . Dexter Wansel’s upcoming LP is likely to disappoint many, mainly wallpaper music, fast tempos, or the Jones Girls sounding like Madonna . . . I’m amazed the brilliant Man Friday ‘Love Honey, Love Heartache‘ (US Vinyl Mania) isn’t bigger here considering the current interest in all things “Garage” — it’s right out of New York’s Paradise Garage where the word came from, and mixed by resident jock Larry Levan, so how truly “Garage” can you get?! . . . Graham Gold had four boxes of records ripped off from his caravan at Caister, all easily identifiable by BPMs sellotaped (or marks of their removal) on the top right corner of the sleeves: no questions asked rewards for return c/o Mayfair Gullivers on 01-499 0760 . . . RELEASE THE TENSION! 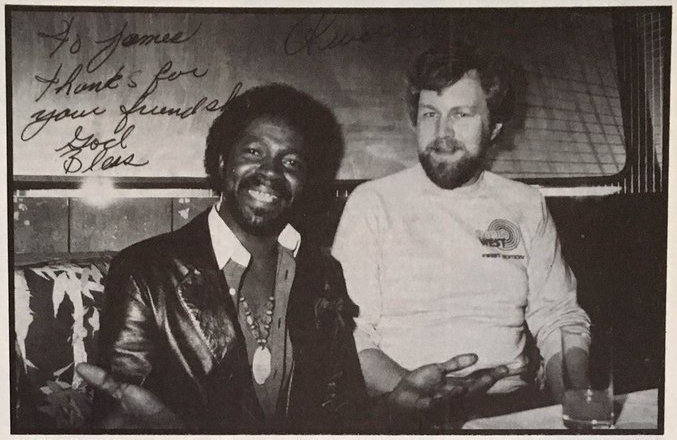 OLIVER CHEATHAM (seen above with BPM-ing James H) soulfully asks DJs all over the world to help find his sweet, sweet girl in a personal ‘S.O.S.’ (Champion CHAMP 12-11), which canters catchily along through John Morales-mixed 119½bpm Arrington-ish percussion once past a stodgy start.

PAULI CARMAN: ‘Dial My Number’ (US Columbia 44-05373)
The System-prod/penned, and the rhythm shows it although bouncier than usual, this brightly wriggling 117¼bpm bounder finds fluidly Pauli waiting all alone by the telephone, like so many before him (dub/inst flip). Call collect!

RENE & ANGELA: ‘Your Smile’ (Club JABX 24)
Another US smash soul slowie like a less schmaltzy Atlantic Starr, this strangulatedly emoted Minnie Riperton-ish 35¾/71½bpm tense little smoocher is flipped by its instrumental and an odd, none too successful, jerkily remade (100½-0-)99½-99-99½bpm ‘Secret Rendezvous 86‘.

TOTAL CONTRAST: ‘What You Gonna Do About It’ (London LONX 95)
Their album’s best track, this Vandross-ish skittery jittery wriggly 108bpm loper has been freshly remixed by Timmy Regisford and WBLS’s Merlin Bobb to sound really lively. The flip’s dub is followed by the brand new similarly Luther-ish (0-)103½ibpm ‘I’m Still Waiting‘.

WILLIE COLLINS: ‘Let’s Get Started’ (US Capitol V-15221)
The Singing Postman returns! Really, he’s a New York mailman, taking the Freddie Jackson route on a tender sensuous 73bpm slow swayer (edit and instrumental 103¾bpm ‘Sticky Situation’ flip). Better looking than Freddie, he could be a real threat, especially as his outstanding LP ‘Where You Gonna Be Tonight?’ (US Capitol ST-12442) is such a strong debut it rivals THE CONTROLLERS: ‘Stay’ (US MCA Records MCA-5681) as album of the week. Also new, including their 12-inched 0-98½bpm adaptation of ‘Sex Machine‘, is the FAT BOYS: ‘Big & Beautiful’ (US Sutra SUS 1017), all for full review next week although any hot BPMs will be in this week’s Disco chart.

COGNAC: ‘Don’t Bother To Knock’ (Rise Records RISE T1, via Pinnacle)
By a confident lady once in First Light with Paul Hardcastle, this great jauntily lurching 117½bpm singalong swinger almost breezes into a ‘Grazing In The Grass’ groove and deserves to be heard (inst/edit flip).

STEVE ARRINGTON: ‘The Jammin’ National Anthem’ (Atlantic A9428T)
Although not helping his tarnished credibility among soul purists, this ‘Star Spangled Banner’-introed jaunty jiggly 0-118¼bpm jumper is winning over many with its simple zest. Instead of the more direct US instrumental flip we get a different 0-119¼bpm ‘Radical Jammin’ version with an awful beat-jarring edit halfway.

YORK: ‘It’s On Me’ (Spartan/Hot Melt 12SP 132)
Gently self reproachful superb tranquil 70½bpm sweet, yet deep, soul smoocher well worth hearing as it’s really lovely, flipped by his even sweeter 63-0bpm revival of the Stylistics ‘You Are Everything’, and slick 112¾-113½bpm overdub of Passion’s ‘Don’t Stop (My Love)‘.

THE ROSE BROTHERS: ‘I Get Off On You’ (US Muscle Shoals Sound Records MSS 3001)
A US black radio breakout from their recent deep soul LP, this nice throatily impassioned slightly Teddy Pendergrass-ish 71½-0bpm weaver with tootling sax sounds oddly at first as if it’s both wowing and too slow! Edit, and mundane fast funk 127¼bpm ‘Freeky Lover‘ flip.

Beats Per Minute for those of last week’s Top 75 entries to reach me on 7in (endings denoted by f/r/c for fade/resonant/cold):